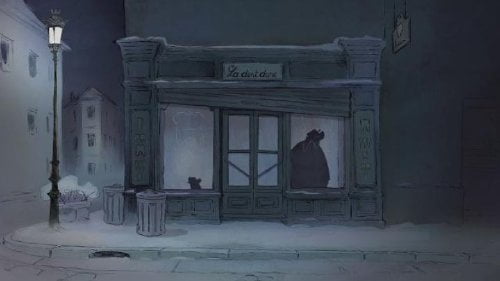 The world is divided in two parts. Above, on the surface, is the home of the bears while beneath lives the rodent population. These two groups have lived in hate and fear of each other, except for one young mouse, a dental student who dreams of being an artist. When she meets a traveling one bear band, the world will change forever because of the friendship between “Ernest & Celestine.”

In an underground orphanage, little female mice are visited at bedtime by The Grey One (voice of Anne-Marie Loop) who terrifies them with tales of the above ground bears whose only goal is to eat them. There's one who challenges these stories until her own experience almost proves them true, but the little artistic dreamer finds a common bond between rodent and predator in "Ernest & Celestine." This Belgian/French coproduction from the Gabrielle Vincent books enchants from its very first frame. Animated in pastel water colors that glow from within, the film's visual style is sweet and comforting, deceptively simple, while its story (adapted by Deniel Pennac) is a delightfully twisted take on friendship and tooth fairies. Ernest (voice of Lambert Wilson, "Of Gods and Men") awakens hungry from his slumber in a ramshackle cabin in the snow. After losing his last crumbs to some enterprising songbirds, he tricks himself up as a one-bear-band to busk (illegally) for food. Meanwhile, little Celestine (voice of Pauline Brunner) has been sent with her classmates to gather bear cub teeth left under pillows, to restock the offices of rodent dentists. When she's spotted, she must flee, and ends up in a lidded garbage can, where Ernest, scavenging for food, finds her, a tasty morsel! Celestine's a quick thinker though, and she leads the big bear to the basement of a candy shop where he blisses out. In order to fill her demanded quota of fifty teeth, Celestine persuades the big bear to rob an ursine tooth shop, but their second heist brands them wanted by the law. Teeth (and to a lesser degree, sweets) are a constant motif throughout this odd little fairy tale, from the moment the Grey's front fang drops into her tea (sound goes all weirdly underwater as we follow its POV), distorting her speech. The theme is unlikely friendship, the two 'criminals' finding themselves on trial as much for their partnership as their crimes. But it's the old fashioned hand drawn animation that's the real hook here. We even enter the story through a drawing of Celestine's and animation constantly shimmers, backgrounds morphing from nothingness into fully realized rooms and landscapes. The rat police undulate as one mass, swirling around sewers. A chase scene features a not-quite-pink and blue van, like something out of a nursery, and when the more brightly colored one turns giveaway, Ernest paints it right into the landscape, them bumps into it to remind us that it is there! It's bracing that these two unlikely friends start as real foes. When it's time to say good-night, the filmmakers leave us as they began, Celestine drawing as Ernest reimagines their beginning, making it suitable for a child's bedtime story. "Ernest & Celestine" is as unique and delicate as an antique Valentine.

This is a true femme “Wall Street” with women, not men, the driving force behind “Equity” with Meera Mahon at the helm, scripting by Amy Fox (from her original story), Sarah Megan Thomas and Alysia Reiner and starring Anna Gun, Sarah Megan Tomas and Alysia Reiner (both wearing three hats, including producer). Sure, there are men in the film but the women are all more fully fleshed out than the males. Guys represent the bad side of the financial world depicted here as the women try to break through the glass ceiling. Now, because it is a femme-based film does that make it good? In the case of “Equity,” the answer is yes. There is tension galore throughout and the machinations of Wall Street are laid out well and clearly. There is also deceit and behind the back conniving (mostly by men) that exemplifies this dog-eat-dog world of finance. I was not familiar with Anna Gunn – I was told that she co-starred in AMC’s “Breaking Bad,” which, I am embarrassed to say, I have not watched yet – but I found her compelling as the ambitious Naomi Bishop. Also good are Sarah Megan Thomas as Erin Manning, Naomi’s right hand (wo)man and VP. And Alysia Reiner as Samantha and Naomi’s old friend and, now, a chief investigator for the White-Collar Crime Division in the Justice Department. Only James Purfoy, as Naomi’s amour and competitor, gets much shrift among the men but garners no sympathy. It is refreshing to see a men’s club going coed and the women in “Equity” are smart, ambitious and able competitors in a man’s world.