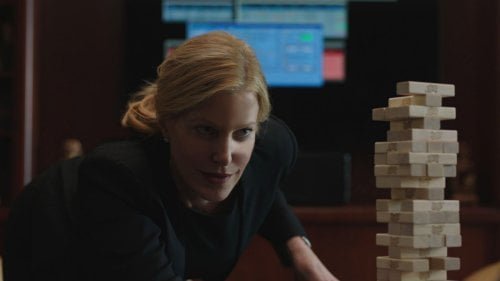 Naomi Bishop (Anna Gunn) is a high level investment banker on Wall Street who, a year before, failed to control the IPO that turned into the biggest success story of that year. Now, she is trying to get back on top and searches for the next big thing for an IPO. She finds one company, Cachet, that could be an enormous success and she starts financial wheels turning in “Equity.”

equity, noun 1. the quality of being fair and impartial; 2. the value of shares issued by a company With her boss Randall (Lee Tergesen, "Monster") about to retire, investment banker Naomi Bishop (Anna Gunn, TV's 'Breaking Bad') is focused on a promotion, but the perception surrounding her failure with Dynacore's IPO haunts her. It is, therefore, of paramount importance that she nails her latest, but she must sidestep the minefields of her unscrupulous broker lover Michael Connor (James Purefoy, "High-Rise"), her own ambitious VP Erin Manning (Sarah Megan Thomas) and the arrogance of her client, Cachet CEO Ed (Samuel Roukin, "Happy-Go-Lucky"). In the thick of things, up pops old college friend Samantha (Alysia Reiner, "Sideways"), a U.S. Attorney office investigator who has just switched her focus from narcotics to the white collar crime of Wall St. This female-centric effort, directed by Meera Menon, written by Amy Fox ("Heights") and produced by costars Thomas and Reiner, illustrates the inequity of value judgements against strong women compared to their male counterparts while also championing women who can give as good as they get. It is unfortunate that the filmmakers have chosen to reward criminal behavior over their protagonist's ethical shrewdness, but "Equity" is nonetheless a slippery financial thriller featuring a tough as nails performance from Gunn. There are a few bobbles along the way, a well written analogy undercut by its naive response, an overly cutesy bit of skullduggery, but Fox succeeds in getting us into the thicket of shepherding an IPO into the marketplace. Gunn is fierce as Naomi, smart and suspicious but also abrasive and callous, business success her only motivation. Her character is ethical, one believes, due to her awareness of ramped up surveillance in a highly regulated industry. Megan Thomas is all wide-eyed positivity, belying her character's self survival. Purefoy is soulless, Reiner wily. The film also stars Craig Bierko (TV's 'UnREAL') as Connor's client Benji Akers, Nate Corddry (TV's 'Harry's Law') as his protege and Sophie von Haselberg ("Irrational Man") as a Cachet malcontent. The production is average, Menon favoring story and characters over visual elements, but in "Equity" crime does pay and that message undercuts the strong woman at its center. Grade:

This is a true femme “Wall Street” with women, not men, the driving force behind “Equity” with Meera Mahon at the helm, scripting by Amy Fox (from her original story), Sarah Megan Thomas and Alysia Reiner and starring Anna Gun, Sarah Megan Tomas and Alysia Reiner (both wearing three hats, including producer). Sure, there are men in the film but the women are all more fully fleshed out than the males. Guys represent the bad side of the financial world depicted here as the women try to break through the glass ceiling. Now, because it is a femme-based film does that make it good? In the case of “Equity,” the answer is yes. There is tension galore throughout and the machinations of Wall Street are laid out well and clearly. There is also deceit and behind the back conniving (mostly by men) that exemplifies this dog-eat-dog world of finance. I was not familiar with Anna Gunn – I was told that she co-starred in AMC’s “Breaking Bad,” which, I am embarrassed to say, I have not watched yet – but I found her compelling as the ambitious Naomi Bishop. Also good are Sarah Megan Thomas as Erin Manning, Naomi’s right hand (wo)man and VP. And Alysia Reiner as Samantha and Naomi’s old friend and, now, a chief investigator for the White-Collar Crime Division in the Justice Department. Only James Purfoy, as Naomi’s amour and competitor, gets much shrift among the men but garners no sympathy. It is refreshing to see a men’s club going coed and the women in “Equity” are smart, ambitious and able competitors in a man’s world.