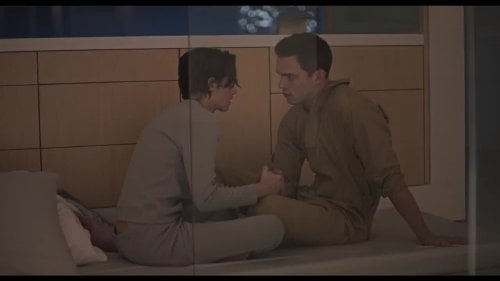 The earth is at peace in this future world of mankind. That peace, though, is at a cost: emotions, relationships and, even, physically touching are outlawed and all must live under the rule of The Collective. Silas (Nicholas Hoult) and Nia (Kristen Stewart) are two denizens in this dystopian world and, when they fall in love, must try to make a life for themselves as “Equals.”

In a future where war has made all but two land masses inhabitable, civilization exists as The Collective, a society working towards colonization in space. But The Collective enforces an emotionless world, one in which touching is forbidden. Those who begin to feel are said to be suffering from Switched On Syndrome (SOS), a condition, if not treated, leads to the Defective Emotional Neurotherapy Facility (the Den) and certain death. When Silas (Nicholas Hoult, "X-Men: Apocalypse") and Nia (Kristen Stewart) realize life is only worth living together, they form a plan to escape to the Peninsula in "Equals." Director Drake Doremus ("Like Crazy," Breathe In"), whose story was written by Nathan Parker ("Moon"), revisits ideas well known from films like George Lucas‘s "THX 1138" and the recent YA adaptation "The Giver" without adding anything new. Within its hushed, color drained world, Hoult and Stewart create a pair of lovers worth routing for, supported by sympathetic portrayals by Aussie actors Guy Pearce and Jacki Weaver, but aside from a climactic twist lifted right out of 'Romeo and Juliet,' you'll know right "Equals" is headed from the onset. We're given little explanation as to how The Commune came into being, nor why people are monitored in the workplace but not, apparently in their homes or public spaces. A support group of 'hiders' and known SOS sufferers meets with seemingly little danger. The production itself is fine, if, again, nothing new, with its futuristic construct of white modular spaces and curved wraparound walkways. "Like Crazy" cinematographer John Guleserian casts everything in a milky blue-white haze, occasionally tinting to red-brownish when Silas's emotions come into play. Blink and you might miss "Diary of a Teenage Girl's" Bel Powley and "You're Next's" Kate Lyn Sheil in nothing roles. David Selby (TV's 'Dark Shadows') appears too kindly and empathetic as Silas and Nia's boss Leonard. Tom Stokes ("The Railway Man") is enjoyably annoying as Silas's work replacement Dominic. In the end, "Equals" doesn't even have the courage of its science fiction convictions, but Stewart and Hoult make the romance work. Grade:

Think of the stark, sterile look of George Lucas’s “THX1139 (1071)” crossed with the adaptations of George Orwell’s dystopian thriller 1984 and the recent “The Giver.” Director (and story developer) Drake Doremus takes this mix, plus the forbidden romance between Silas and Nia, and slowly and quietly (there is little dialog) plods on through to the not unexpected – and somewhat confusing – finale. Nicholas Hoult and Kristen Stewart are okay as the put-upon-by-society, star-crossed lovers. The story, though, lacks any real tensions. In this strange, new world where emotions are suppressed, the inmates of The Collective are regularly examined for signs of SOS (Switched on Syndrome, showing signs of emotion). If diagnosed positive, they are ranked from Stage One to Stage Four, where the latter means incarceration in The Den and, probably, suicide. This is all very sinister sounding but the lack of real tension and danger made me, at the half way mark, just want it to wrap up. It does, but in a not very satisfying way. Its dubious release schedule reinforces the feeling.