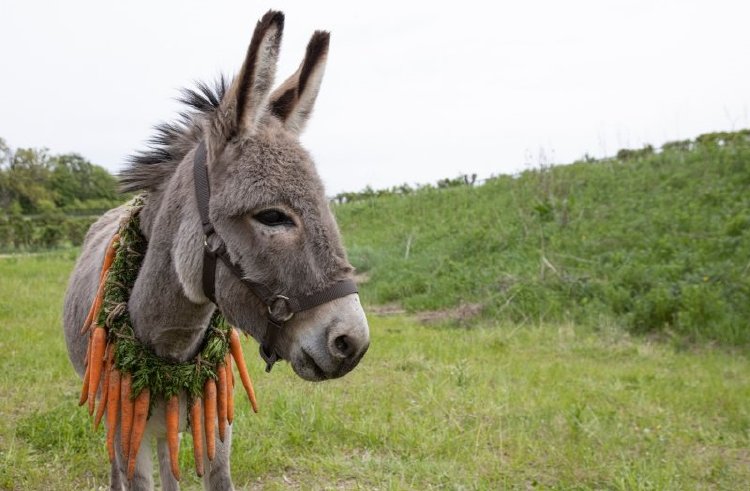 By night, he’s a circus entertainer performing with his beloved Kasandra (Sandra Drzymalska).  By day he’s a pack animal, whipped to haul scrap metal for her rough boyfriend Vito (Lorenzo Zurzolo).  But when animal rights protestors succeed in ‘freeing’ circus animals, the journey afterwards is often fraught for “EO.”

While acknowledging the profound influence of Robert Bresson’s 1966 masterpiece, “Au Hasard Balthazar” on his filmmaking career, director Jerzy Skolimowski (“Essential Killing") says he and his producer, writing partner and wife Ewa Piaskowska were actually inspired by the soulful demeanor of a donkey standing in the background of a ‘live’ Christmas manger scene.  The 85 year-old animal lover thought its eyes would be the perfect conduit to tell a story without a typical narrative structure.  Ironically, some narrative structure may have made “EO” an even better movie than it is, some of its passages puzzling.  On the other hand, this opaqueness helps Skolimowski plunge us into an animal’s perspective, the only anthropomorphization that which we project ourselves.

We first see EO in what appears to be distress, the costumed Kasandra’s concern evident in the strobing, red-filtered square frame which captures her and her donkey in close-up.  Then EO stands up to a cheering crowd, his collapse apparently part of the act.  But when he’s loaded onto a trailer after the circus is shut down, a tear streaming from his eye may signal real distress.  As a heartbroken Kasandra stands in the middle of the street, notably dressed in red, the trailer rides off, forlorn braying emanating from within.  Pawel Mykietyn’s (“Essential Killing) score is like a fairy tale here, underlying accordions echoing the circus, but it evolves throughout, new instruments reflecting changing environments.

So begins a road trip of sorts, EO never staying in any one place for long.  He first becomes a working animal at an elite riding stable, the overlooked animal among the pampered, but that is cut short when a high strung horse causes him to bolt, knocking over trophy shelving.  Another trip in a trailer (EO is often seeing looking out at other animals running free) brings him to a donkey sanctuary, seemingly an ideal place, but EO seems depressed and when a drunken Kasandra arrives on the back of a motorbike to feed him a birthday muffin, her departure will cause him to break down the fence in pursuit.

EO bolts from the road as a car approaches, entering an impressionistic night in the forest, one which lands him within the laser beams of hunters shooting at wolves.  And indeed, every time humans enter the landscape, animals appear to suffer for it.  Then again, so do the humans, once even at EO’s instigation when he kicks the man guiding him and a cart through the cruelty of a fur farm.

EO’s life offers more moments of joy than Balthazar’s ever did, but happiness is always short-lived.  Take his adoption as a soccer team’s mascot when an animal control officer (Michal Przybyslawski) turns out to be a goalkeeper – EO’s admired during the game and carried along with the victory celebration, but when fans of the opposing team violently crash the party, the beautiful little creature becomes a target of their rage.  It’s the most disturbing scene in the film, but EO, thankfully, is never in frame.  (What is, in the aftermath, is a robotic dog struggling through the grass, again in that frequently used strobing red filter – is this EO’s imagination at work?  We are left to wonder.)

Another horrific human encounter finds EO taken under the wing of Mateo (Mateusz Kosciukiewicz), who inexplicably ends up getting them both a lift in yet another trailer journeying to his ancestral home, where his welcome from The Countess (Isabelle Huppert!) is less than warm.  And it is Skowlimowski’s conclusion which is the most frustrating element of the film, the human drama the first to note religion, so essential to “Balthazar,” with The Countess introduced partaking in a private Mass only to be interrupted by a phone call.  EO is forgotten, munching grass outside as she berates Mateo.  The little donkey wonders off yet again, crossing a bridge over a dam only to end up in the midst of a dusty cattle drive, a scene making little sense, only serving as a final note.  But although his journey may be fractured, EO, and the six donkeys that portray him, capture the entirety of your heart with his simple, stoic gaze.

As I watched “EO,” the story of a little donkey, it made me think of Luc Bresson’s 1966 film, “Au Hasard Balthazae,” another story of a little donkey. That movie broke my heart over Balthazar’s suffering at the hand of man and I was reluctant to put my emotions into turmoil again. Fortunately, director and co-writer Jerzy Skolimowski, with Ewa Piaskowska, while inspired by the other little donkey’s relentlessly bleak life story, do temper that bad and suffering with moments of joy for diminutive EO. And, he is a little donkey you want to bring home.