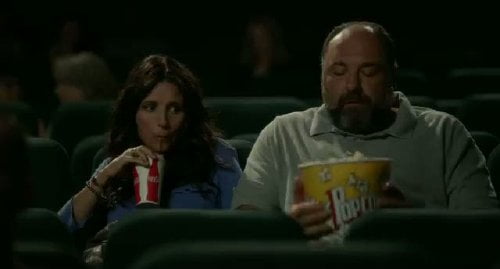 Eva (Julia Louis-Dreyfus) is a divorced masseuse happy with her job but dreading the fast approaching day when her daughter, Ellen (Tracey Fairaway), goes off to college. She meets Albert (James Gandolfini), a like-minded divorced guy also facing the pending departure of his daughter, Tessa (Eve Hewson). Together, they may be able to cope with their mutual problem in “Enough Said.”

Eva (Julia Louis-Dreyfus, HBO's 'Veep') is a single mom dreading her daughter Ellen's (Tracey Fairaway) imminent departure for college. At a party, she meets Albert (the late James Gandolfini in his last starring role), a man in the same situation. He's not really what she thinks she's looking for, but he makes her laugh and soon she's discovered the sexiness under his bear-like exterior. She also met Marianne (Catherine Keener, "Please Give") at that party, a woman who impresses her with her outward put-togetherness and intellectual career as a poet. Eva takes Marianne on as a new massage client and the women become friends, but there's one big problem - Marianne constantly disses her ex and it doesn't take long for Eva to realize that the man Marianne thinks so little of is Albert in "Enough Said." Writer/director Nicole Holofcener ("Lovely & Amazing," "Please Give") likes to give her insecure female protagonists thorny moral quandaries to work their way out of. With "Enough Said," it's her central character's insecurity that causes her problem. Thankfully, Holofcener's cast Louis-Dreyfus, an actress capable of emoting such penitent horror at her own bad behavior, we can sympathize even with her breaking Gandolfini's heart. Eva's problem is that she doesn't trust her own judgement. If Marianne is everything she wishes she were, why doesn't she see Albert as damaged goods? And so, after coming together so naturally, revelling in each other's company, Eva gradually morphs into Marianne's critical behavior. When she insists her friend Sarah (Toni Collette, "The Way Way Back") and her husband Will (Ben Falcone, "The Heat") have them over for dinner for yet another opinion on Albert, it's a disaster, Sarah and Will instead wondering about their opinion of their friend. Holofcener illustrates Eva's behavior in other relationships as well. Already missing her daughter before she's even gone, she gets too close to Ellen's needy friend Chloe (Tavi Gevinson), disrupting the relationship she's trying to hold on to. In a repeated montage of Eva servicing three clients - bad-breath guy, shallow incessant chattering woman and young guy who lives up a steep flight of stairs - we see Eva's annoyance that the latter never offers to help her carry her massage table - but she never asks for help. When Albert takes Eva for lunch with his daughter, Tess (Eve Hewson, "This Must Be the Place"), she doesn't recognize the fact that the girl's snobbery stems from her mother. But Holofcener's overwritten her material, stacked her deck until it threatens to topple over. As portrayed by Catherine Keener, Marianne is a self-congratulatory constant complainer. Eva's best friend Sarah is, irony irony, a psychotherapist who cannot deal with her own housekeeper and is a bit OCD when it comes to furniture arranging. As if that weren't enough, Sarah and Ben are always passive aggressively picking nits with each other and the Chloe-Eva relationship is taken too far. Thankfully, in addition to Louis-Dreyfus's sympathetic performance, we have the very relatable Gandolfini. His heart-breaking performance as an unhappy but resigned husband in last year's "Not Fade Away" was, like the film itself, pretty much overlooked. His Albert exists in that realm, but with the potential for a new lease on life and Gandolfini's self-deprecatory, gentle humor charms us as much as Eva - this is a man whose company would be cherished, happy in his work, sensitive to others, but no push-over either. "Enough Said" will be a bittersweet experience for Gandolfini fans and a nudge for theatrical casting agents in Louis-Dreyfus;s direction. They're wonderful together. If only the rest of the movie worked as well.

I was stunned, like many, when I heard of James Gandolfini’s way too premature death earlier this year. After seeing one of his last performances in “Enough Said,” it left me in a melancholy mood. That, though, is not a criticism of “Enough Said.” The film, Louis Dreyfus’s first starring role in a feature, is a nice romantic comedy about two people, whether they know it or not, who are made for each other. Eva is an independent, hard working woman who lugs her not so compact or light massage table from one client to the next, including her latest, Marianne (Catherine Keener), a well-to-do published poet but a lonely woman, too. Soon, client/customer chit chat turns into gab fests as Marianne tells her new best friend, Eva, all the bad habits of her ex. To listen to her talk, the poor schmuck had absolutely no redeeming value. Around this time, Eva meets Albert and, to her horror, she suspects that he is Marianne’s ex-husband. Too late, Eva figures out that Marianne poisoned her mind toward Albert, who is a truly good, kind and intelligent man. Nicole Holofcener has a long time television background (interspersed with feature films like “Please Give” and “Friends with Money”) and the dynamics of “Enough Said” has a sit-com feel, especially when focusing on TV star Louis-Dreyfus. On the other hand, when Albert comes into the picture, the movie changes character and becomes better. Gandolfini wears his character with dignity, even as he maligns himself for his quirks and foibles. Albert, to my mind, is a real person. Louis-Dreyfus, on the other hand, is more a character than a person. This goes for the other characters. Keener is the well-to-do new friend who dazzles Eva with her elegance and taste but is a bitter, not so likable person. Toni Collette is best friend Sarah who always lends Eva her shoulder for comfort. Chloe (Tavi Gevinson) is Ellen’s needy friend who may become the surrogate daughter when she departs for her far-away school. Everyone else is a two-dimension character there to fill out the background, only. Holofcener breaks Julia Louis-Dreyfus out of her long-time television sit-com career but it is not evident, with just this one film under her belt, if she can make the transition to the big screen. The reason to see “Enough Said,” though, is the touching performance by James Gandolfini. He is missed.