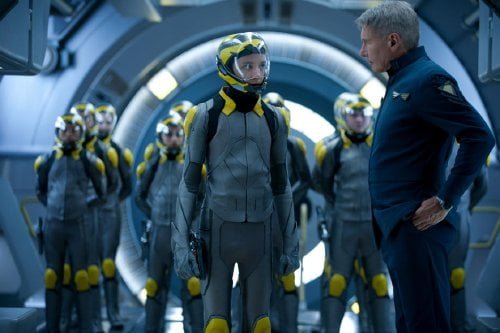 50 years ago, the Formics, an insect-like alien race, invaded the Earth and ravaged much of the planet. There has been peace since the invaders were stopped by one young man, Mazer Rackham (Ben Kingsley), but that peace, we learn, will soon end when a second invasion fleet arrives. The search is on to find a new young warrior to stop the Formic onslaught in “Ender’s Game”

Writer-director Gavin Hood adapts controversial author Orson Scott Card’s ahead-of-its-time novel, Ender’s Game (1985), about a boy, Ender Wiggin (Asa Butterfield), who is called upon to change the destiny of Earth. For 50 years, since the invasion and defeat of the Formics, there has been a search for a leader the likes of Mazer Rackum. The best and the brightest are selected to become warriors in the coming battle with the bugs. Among them, one of the youngest recruits is Ender, selected personally by training commander, Colonel Graff (Harrison Ford). This is a very faithful adaptation of the novel. I read Card’s book a few years ago and was impressed by the future world he conceived back in the 1980s. The setting that he imagined must have seemed far-fetched back then when the high tech world of today was in its relative infancy. Card brought to life a future time that has many surprising parallels to our current advancements in information gathering and its dissemination, communications and, even, the use of drones in combat. The mankind versus the aliens theme has been around since the birth of science fiction back in the day of Jules Verne and H.G. Wells. Director Hood and company take Card’s novel, which puts a fresh spin on the theme of us against them, and brings it to the big screen in a high-tech extravaganza. Having read the book, I had different expectations for the film than the uninitiated, who have the story unfold for them for the first time. Fans of the book should be pleased with the familiarity of” Ender’s Game,“ but the many who have not read it are in for an even better treat. Asa Butterfield, who is developing into a handsome young man, is solid as the brainy outsider who knows that he has to earn the respect of his elders, whether they be fellow student-warriors or his commander, Graff, and his assistant in training, Major Gwen Anderson (Viola Davis). This brings Ender increasingly difficult challenges as he works his way up the command line. This story of ambition, advancement and the honing of the youngster’s tactical and strategic skills is filled with simulated warfare – think modern video games on steroids – as the students become warriors preparing for the coming war. One of the things I really liked about the book was the surprise twist at the end and the filmmakers keep that twist. “Ender’s Game is an action packed sci-fi flick that will entertain its audiences, familiar or not. This is not an actors’ film but its veteran starring cast do a good job in giving depth to their characters, though Abigail Breslin as Ender’s sister, Valentine, is left out in the cold character-wise. “Ender’s Game” is big money filmmaking with a budget north of $100 million and the cash is up there on the screen, especially with the copious use of CGI to create the battle training. This is pure science fiction fantasy that should prove a crowd pleaser as the holiday season begins.