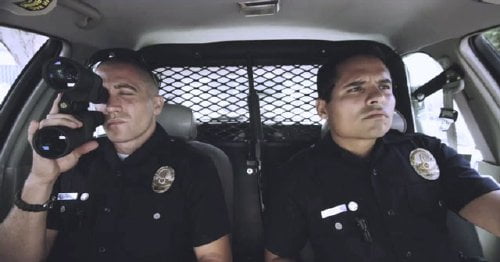 LAPD Officer Brian Taylor (Jake Gyllenhaal, "Source Code") gets flack from fellow officers for his ever present camcorder. He's working on a school project for a filmmaking elective and is trying to encourage his partner Mike Zavala (Michael Peña, "World Trade Center") to follow in his ambitious footsteps towards making detective. But the two men unwittingly step into the business of Mexican drug cartels and do not realize just how close they may be to "End of Watch."

LAPD movie specialist David Ayer ("Training Day" script, "Harsh Times") may be giving us more of the same, but this time out he breaks his sociopathic cop mold to pit two tightly bound men from very different backgrounds against villains so cold-blooded they're almost incomprehensible (vigilante justice is mostly left to Frank Grillo's ("The Grey") Sarge). Gyllenhaal puts on a cocky 'tude and shaves his head to convince as a tough patrolman out for something more from his career and his women while Peña provides the film's heart with his settled-downness. The duo have great chemistry together and if Ayer goes overboard with tightly packed dramatics and an over-weighted ending we do have characters worth caring about set within situations both heavy and light. Ayer begins with a recent cliche, choosing the 'found footage' route as Taylor recites his opening narrative for his film within a film. So, Ayer the director has figured out a new way to present an opening voice over stating his film's theme, but Brian's video project never really goes anywhere and gradually drifts out of the narrative (not the only thread in this film that seems to break). But after we've seen the chase which ends with the cornered perps getting out of their vehicle and firing on our point of view, it's bracing to be thrown into the captain's office to hear that even if it's a justified on-the-job shooting, it's still a homicide. One thread which doesn't break is how the partners acquire a snitch. Called to deal with a drunk who's threatened his mailman, Mike responds to his fellow Latino's challenge to a fight. Off comes the badge much to Brian's unbridled cinematic delight. Mike looks overpowered, but overcomes and later we see this guy buying them good will, explaining how they 'did him a solid' by leaving the brawl outside the law. There are essays on paperwork and a respite for romance (Mike married the woman who asked him, the much-admired-by-Brian Gabby (Natalie Martinez, 2008's "Death Race"), Brian's finally found a woman who not only attracts him, but one he can talk to, Janet (Anna Kendrick, "Up in the Air," "50/50")), but "End of Watch" is all about putting a face on these lawmen and this Ayer does well. The extreme juxtaposition of a large and loving Mexican family, exemplified by the joyously lived-in marriage of Officer Zavala, and the cold-blooded psychopathy of Mexican drug cartels spilling into L.A.'s South Central neighborhood, embodied by La La (Yahira 'Flakiss' Garcia), really slams home the value of a life often treated cheaply. So much happens by chance - a woman asking that her elderly mother be checked up on leads to a house of horrors; an unusual amount of garbage outside of a small bungalow leads to a bust of unimagined proportions. Without even trying to go for such high stakes, Taylor and Zavala end up with a price on their heads. Then there's Van Hauser (David Harbour, "Revolutionary Road," "Thin Ice"), the fellow cop who complains about Brian's camera and who Brian complains is never seen until 'end of watch.' Ayer subverts our expectations by loading the meaning of that term the last time we come across this character (in a scene of almost surreal violence). Ayer serves up a nice male to female ratio, with fellow cop partners Orozco (America Ferrera, TV's 'Ugly Betty') and Davis (Cody Horn, "Magic Mike") crossing paths with Taylor and Zacala as almost a Green chorus (Orozco also provides yet another link to La La). Martinez helps provide a full portrait of a marriage with very little screen time, but Anna Kendrick, as the smart girl Gyllenhall's been searching for, is given a scene perhaps intended for comic relief which instead paints her as a girlfriend to run from. The film's extended climax is suspenseful, but a coda so blatantly defies expectations of what we've just seen it's almost ludicrous. Still, Ayer makes us feel loss and contemplate just how randomly life deals its cards.