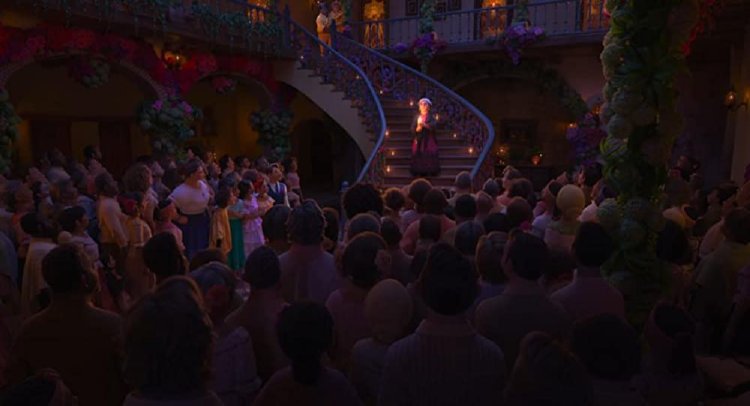 Years ago, when Alma (voice of María Cecilia Botero) and Pedro were forced to flee their home with newborn triplets, violence followed and Pedro was shot.  Bereft, Alma prayed to a candle and a miracle ensued, creating shelter, a living home lit by its eternal flame.  The magic extended to the Madrigal family, beginning with those triplets, each of whom receives a special gift, or super power if you will, at the age of 5, a gift which aid both the family and the community of the surrounding locale of “Encanto.”

Despite the largest cast of characters ever in a Disney animation, the Disney formula is readily apparent.   There’s more than a little “Beauty and the Beast” in “Encanto,” from its glasses wearing heroine to a magical abode fueled by magic (a rose under glass for “Beast,” a candle here).  But the Disney formula has been working for decades and although this may not be one of their top tier efforts, it finds its own personality as it goes along.

There is an anomaly in Madrigal family lineage, Mirabel (voice of Stephanie Beatriz, TV's 'Brooklyn Nine-Nine'), the youngest of Alma’s daughter Julieta’s (voice of Angie Cepeda) three.  While Isabela (voice of Diane Guererro) makes flowers bloom everywhere and Luisa’s (voice of Jessica Darrow) super strength allows her to transport livestock or move a bridge, Mirabel was left empty handed when she turned five.  Now Mirabel is helping her Aunt Pepa’s (voice of Carolina Gaitán) son Antonio (voice of Ravi Cabot-Conyers) prepare for his ceremony.  But she’s also seeing visions of La Casa Madrigal cracking and coming apart, something which threatens her close bond with her Abuela Alma, just like the dire predictions of her estranged Uncle Bruno (John Leguizamo).

"Zootopia" directors Byron Howard and Jared Bush, who also wrote the screenplay with co-director Charise Castro Smith, have created a colorful world based on the topography and culture of Columbia, although they trend toward over-plotting, something which also hampered “Raya and the Last Dragon.”  There’s plenty of humor mixed in, much based on the character’s gifts, especially Luisa’s (Antonio’s eventual reveal paints him a mini Doctor Dolittle).  The characters are all individually defined right down to their traditional wardrobes, outsiders, like Mirabel’s dad Agustín (voice of Wilmer Valderrama) distinct visually as well.  Eight original songs are supplied by Lin Manuel Miranda, the best of which is ‘We Don’t Talk About Bruno.’

It will be no surprise that Miranda has had something magical to offer all along.  “Encanto” celebrates a family whose differences strengthen the whole.

Mirabel (Stephanie Beatriz) is the only one in her magical family without a special “gift.” But when the house they live in begins to lose its supernatural powers, it is up to the ordinary young woman to save the family magic in “Encanto.”

A Disney musical about a feisty young woman who proves that magic is something held within us. That sounds, well, no different than the many Disney musicals about feisty young women, from “Beauty and the Beast” and “Frozen.” Plus, we get Lin Manuel Miranda’s same sounding music and the usual Disney bright, flashy production numbers.

The story hinges on the Madrigal family’s home as a magical place and that magic extends to the surrounding townsfolk who prosper because of the special house. The powers of the Madrigal home extend to all the members of the family – except Mirabel. You know that lack of magic in the young woman is just a sham because you also know from the beginning that Mirabel has a magical gift and it just has to be discovered.

There is a strong element of “Beauty and the Beast (1991)” in “Encanto” with its magical house in danger of being destroyed – remember Beast was in danger of dying and his magic castle disappearing. Add to this composer Miranda’s routine tunes and we get a cookie cutter reproduction of previous Disney strong-young-woman movies, this time with a Latin flair.