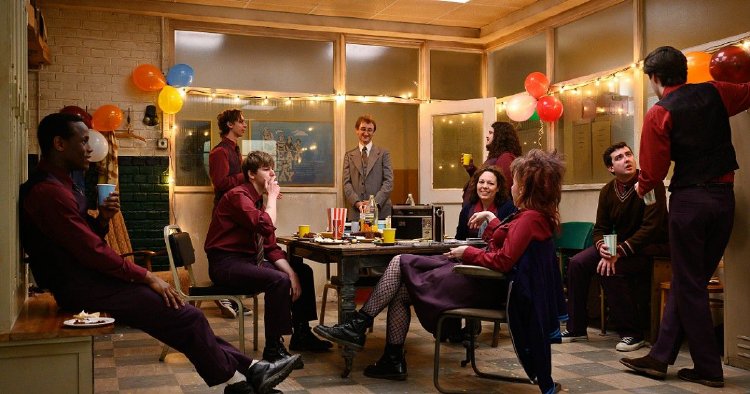 Middle-aged Hilary (Olivia Colman) has just returned to her job as the duty manager at a fabulous art deco theater in an English coastal town after suffering a mental health breakdown.  While her boss, Mr. Ellis (Colin Firth), demands sexual favors, the rest of the staff has formed a supportive family.  But it will be the theater’s newest employee, Stephen (Micheal Ward, "Lovers Rock"), the son of a Trinidadian immigrant, who will inspire Hilary to see the cinema, and perhaps life itself, as an “Empire of Light.”

Writer/director Sam Mendes’ ("American Beauty," "1917") paean to the 1980’s of his youth celebrates its music through the tastes of multiple characters and features the glorious cinematography we’ve come to expect from Roger Deakins, who opens with the melancholy beauty of softly falling snow on a gray, seaside day.  But the central relationship Mendes hangs it all on is misguided, leaning into the Magical Negro trope with Stephen’s all-too-perfect treatment of the damaged, fragile Hilary, a sentimental fantasy symbolized by his care of a pigeon with a broken wing.

Production designer Mark Tildesley ("The Two Popes") certainly found a magical location in Margate and Dreamland, a former cinema and ballroom sitting across from the sea, restored here to art deco glory as the Empire.  And Mendes does pretty well with his mix of cinema employees, an assorted band of outcasts we can believe get along, from nerdy but nice junior manager Neil (Tom Brooke, "The Death of Stalin") to punk rock ticket taker Janine (Hannah Onslow, TV's 'Call the Midwife'), the eighteen year-old who is the first to connect with Stephen through music (she Joy Division and Siouxsie and the Banshees, he The Specials and The Beat – Hilary listens to Joni Mitchell and Bob Dylan).  Veteran character actor Toby Jones ("Berberian Sound Studio") embodies cinema as Church, Norman’s projection booth sacrosanct.  They’re all aware of what Mr. Ellis is forcing upon their beloved Hilary, but hey, this was the 80’s.

When Hilary shows him around on his first day, Stephen inquires about the locked off portion of the theater and she indulges him, unveiling what used to be two more upper screens and a fabulous top floor ballroom overlooking the ocean (it is here where he finds the bird).  Outside of a doctor’s appointment that gives us our first clue that Hilary is dealing with mental issues, the first crack appears after she observes Stephen and Janine goofing about and overreacts, reading the riot act.  He’ll return later to apologize as she’s locking up on New Year’s Eve, and join her on the rooftop to watch the fireworks.  They’ve shared glances of understanding and Hilary impulsively kisses him, leading them into an April/September affair.  She’s also about to have her eyes opened about the racism that exists in her home town when she sees Stephen harassed on the street by a group of skinheads (apparently she’s never watched the news).

Stephen’s attentions embolden her and she stops taking her Lithium.  We’ll watch her unravel, first during a trip to the beach when he mentions an earlier girlfriend and she reacts by destroying a sandcastle.  She stops coming to work and refuses to answer her door, but on the Empire’s big night, a celebrity-studded premiere of “Chariots of Fire,” she swans in with lipstick on her teeth, her evening dress not completely zipped, and, to Ellis’s horror, reads an Auden poem to the crowd.  She tops that off with a blunt breakdown in the lobby where she accuses him of all his improprieties in front of his wife and staff, a bit of heroic mania.  It will be Stephen, of course, who is on site when the police arrive with social services to take her away.

After a time, a Hillary dulled down again by her medication, is welcomed back by Neil, Ellis having moved on, but Mendes feels the need to add a National Front riot that begins with a cinematic parade of motor scooters and ends in the Empire’s lobby, skinheads smashing through in a scene that plays like a violent musical, leaving Stephen badly beaten.  Then there’s Hilary’s odd lack of interest in the movies, something introduced in order to turn it around in the third act and showcase the tear-stained actress sitting in a beam of light and it absolutely fails in its attempted transcendence (and this in spite of the fact that the film she’s watching is one of my all time faves albeit an odd choice for escapism, “Being There”).

Mendes has a fine cast here, Colman navigating various stages of mental illness and medication supported by compassionate dreamers and Firth’s sleazily repellant abuser (the film also stars Tanya Moodie as Stephen’s mystified yet accepting mother and Crystal Clarke as the former girlfriend who reenters his life).  Tech credits are top notch across the board, Trent Reznor and Atticus Ross delivering a surprisingly muted piano score.  But Mendes’ equation of Hilary’s mental problems with the racism tormenting Stephen as connective bonding tissue is the film’s fatal flaw.

Searchlight Pictures releases "Empire of Light" in theaters on 12/9/22.