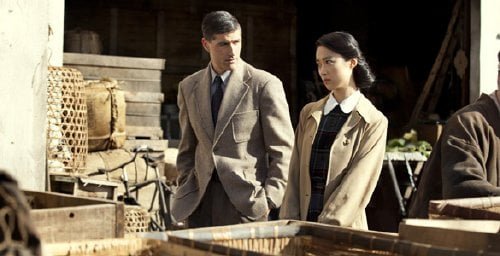 In 1945, General Douglas MacArthur (Tommy Lee Jones) was dispatched to help stabilize post-war Japan. The politically ambitious General was also responsible for prosecuting war criminals, among them Japan's Emperor Hirohito (Takatarô Kataoka, "Empire of the Sun"), worshipped as a god by his people. Wishing to sidestep a potentially explosive situation, MacArthur assigned General Bonner Fellers (Matthew Fox, TV's 'Lost,' "Alex Cross"), a man well known for his understanding of Japan, ten days to investigate whether or not the U.S. should prosecute and execute Japan's beloved "Emperor."

Call this one Hirohito's Hyde Park on Hudson, as another complex and intriguing piece of history is overshadowed by an inconsequential love story. Ham fistedly directed by Peter Webber ("Hannibal Rising") and adapted from Shiro Okamoto's book by the screenwriters of "Woman on Top" and "Desperate Measures," the film begins with a disadvantage that is only occasionally overcome by Japanese supporting players reenacting crucial moments of their own history. This is a tone deaf production. For a masterful treatment of the same subject matter, one should seek out Alexandr Sokurov's 2005 "The Sun" instead. A devastated Japan still revered its Emperor, a man who lived a hermetic life inside his Tokyo Palace and who only ever addressed his people to garner their support for Japan's surrender. In order to do this, the diminutive royal went up against his own military leaders. It's a fascinating story. And yet here we get Tommy Lee Jones clenching an oversized corncob pipe in his teeth and Matthew Fox acting all-American swoony over the lovely Eriko Hatsune ("Spiral") as Aya, the girl he met stateside and saw later against her family's wishes in Japan. The love story, which takes up at least half of the film's running time, was totally fabricated per producer Yoko Narahashi, the granddaughter of Teizaburo Sekiya, one of the seminal figures of the story. Actor Isao Natsuyagi ("Warm Water Under a Red Bridge") does justice to Sekiya and is one of the film's bright spots, but Narahashi's idea hasn't been well fostered. The first image we see is Fox romping through a lush green bamboo forest with Hatsune in a contrasting red dress before shifting to the grey, bombed out landscape of 1945, a limited recreation around MacArthur's intact headquarters. Survivors are represented by a handful of people along the road and Takahashi (Masayoshi Haneda), the man who presents himself to Fellers as his driver. The first directive Takahashi's given is to find the girl in the photograph clipped to a file Fellers thrusts at him. Eventually Fellers will realize Takahashi is dealing with losses of his own. Then there's the political maneuvering within MacArthur's realm where a fictional composite General Richter (Colin Moy, TV's 'Xena: Warrior Princess') plots against Fellers by pointing out to the chief that Fellers diverted bombing missions away from Aya's home. We're given little reason for why Aya was alone in an American college in 1932 other than the fact that she's an 'unattached female.' She makes a mysterious exit, is hostile when Fellers reappears, then melts when her uncle, General Kajima (Toshiyuki Nishida, "Sukiyaki Western Django"), declares their relationship impossible. And yet Kajima gives the American access to his library, explaining the mind of the Japanese soldier with war on the horizon? Fox makes for a stalwart soldier, but he and Hatsune are merely pretty people without deep connection. The film regains interest whenever Fellers leaves his personal investigation for his criminal one, speaking with Koichi Kido (Masatô Ibu, "Taboo"), advisor to the emperor, gaining unprecedented access to the palace and Teizaburo Sekiya (Isao Natsuyagi, "Warm Water Under a Red Bridge"), then hearing the surprisingly blunt words of prime minister Fumimaro Konoe (Masatoshi Nakamura). The final revelation of Hirohito himself, come to meet MacArthur, is the only time Jones really feels right in the role. "Emperor" makes its point about revenge versus justice, but the west meets east 'universal' love story keeps diverting attention from the real action and the production itself is lacking.