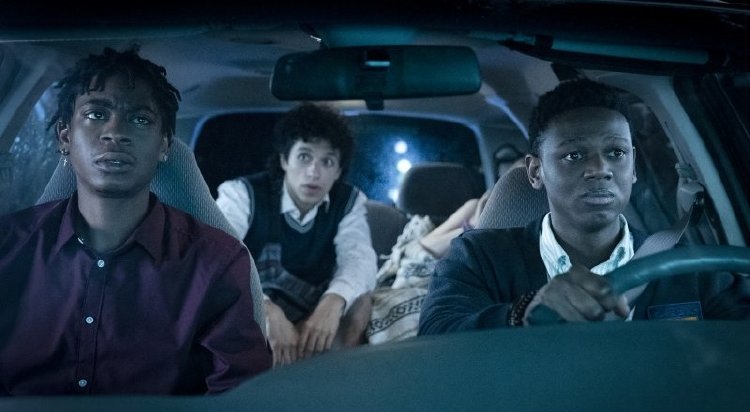 As Kunle (Donald Elise Watkins, TV's 'The Underground Railroad') works feverishly on the mold experiment he hopes will get him into Princeton, his best buddy Sean (RJ Cyler, "The Harder They Fall") is creating a master plan for a ‘legendary tour’ of their campus’s seven spring break parties.  But the duo’s divergent activities are both endangered when they return to their apartment to find their third roommate Carlos (Sebastian Chacon) left their front door unlocked and a young, inebriated blonde (Maddie Nichols) is passed out and vomiting in their living room.  The sheltered Kunle and street smart Sean have entirely different feelings about calling “Emergency.”

Expanding on their 2018 short of the same name, director Carey Williams and writer K.D. Dávila (a 2022 Oscar nominee for the live action short "Please Hold") combine a blackly comedic buddy comedy adventure a la 1990’s “House Party” with the hot topic, if long systemic, predicament of young men of color being viewed as guilty by their very appearance.  While the film loses some edge and dramatic focus in its third act, it cannot be faulted for the casting of its leads, Watkins and Cyler a perfect odd couple who nonetheless create a loving bond, and Nichols, who somehow evokes both humor and horror in her unconscious state.  Dávila regains her footing in final scenes which find the lads accepting the truths of their different life experiences.

Carlos, who was engrossed in video gaming, is no help in unlocking the mystery of just who this woman is.  Kunle’s immediate reaction is to call 911, but Sean objects, noting that things will not look good for two Black guys and a Latino housed with an unconscious white woman.  And so they make their first move in an escalating evening of making things worse by loading her into Sean’s van to ‘bring her back where she came from.’  Just about the time the lads are trying to find a white friend to help intervene once they’ve raised police notice, the woman they refer to as ‘Goldilocks’’ sister, Maddie (Sabrina Carpenter, "Horns"), realizes she hasn’t seen Emma at their party in over two hours.  Joined by friends Alice (Madison Thompson, TV's 'Ozark') and Rafael (Diego Abraham), they add to both the racial suspicion cast upon the young men and make the hunt for them a two-pronged affair.  Then Carlos not only learns something alarming about the girl they’ve inadvertently kidnapped, but mixes up the benign liquid he’s been using to hydrate her with Sean’s lethal alcoholic concoction.

The film features plenty of white folk behaving poorly, from the female professor who projects the N word across the front of her classroom for discussion to the middle aged couple who panic when the boys pull over on their street.  Although Maddie has legitimate fears about her sister, she comes across as a hysterical Karen when providing details to a 911 dispatcher.  But while the filmmakers, Watkins and Cyler do a great job fleshing out Kunle and Sean, they never seem to know quite what to do with Carlos other than make him a bridge to Maddie’s group.

“Emergency” is a racial comedy with uneven bite, but even its craziest situations seem all too plausible.

Three college roommates are getting ready to take part that night in the Legendary Tour of Buchanan University’s fraternity parties. Before they can join the festivities, the friends of color discover a passed out white girl on their floor. Of course, calling the cops is not an option and they have to figure out how to handle the “Emergency.”

This thought-provoking expansion of the 2018 Sundance Special Jury Prize winning short by director-writer Carey Williams gives the impression that it is a typical frat-boy comedy of errors. But, there is much more a social commentary of our current racism-denying culture than a slap stick college comedy.

The dilemma that Kunle (Donald Elise Watkins), Sean (RJ Cyler) and Carlos (Sebastian Chacon) face is a unique one and changes “Emergency” from a goofball comedy to a biting social commentary. I, a white Anglo-Saxon, had to really think about what the filmmakers were going for and I got it in an instant of revelation - what I would do in their situation.

That realization is what could happen to the three amigos if they do the “right thing” would not happen to me, a white guy. That fear of consequence is palpable but the social commentary reverts to slapstick as the comedy of errors and coincidences plays out.

The young cast does a fine job portraying their characters and there is good chemistry among them all. This is especially true of Watkins and Cyler who feel like BFFs despite their obvious differences. Kudos also to Maddie Nichols as the passed out girl, Emma, who with very few words makes a big impression. I cannot quite figure out if this is a comedic drama or dramatic comedy but I guess it matters not.