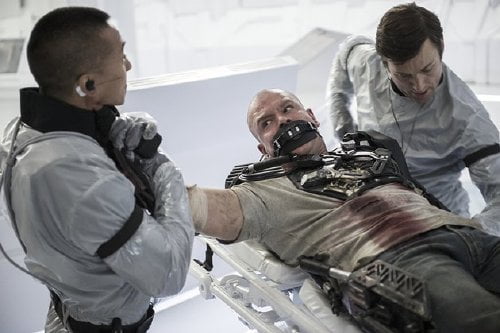 It is the year 2154 and the have nots, what we now call the 99%, are stranded on the depleted Earth while the wealthy one percenters inhabit a giant orbiting space station with all the luxury and comfort that they desire. The day has come, though, where those left behind are ready to overthrow those who control everything from their station called “Elysium.”

In 2154, all of Earth has become a third world country, slaving for the elite who escaped its pollution to create a Utopian space station where everyone is wealthy and healthy. But Max (Matt Damon) has always felt he had a place there, even during his younger days spent in a Catholic orphanage. When former car thief Max, who's lucky to have a job manufacturing the robots that police them, gets a fatal dose of radiation at work, he has nothing to lose and agrees to be fitted out with a metal exo-skeleton to perform an undercover job for Spider (Wagner Moura, "Elite Squad") in exchange for a ticket to "Elysium." Even when growing up in a Catholic orphanage with his best friend Frey (Valentina Giron) young Max (Maxwell Perry Cotton, "Mr. Popper's Penguins") fretted about the unfairness of the separation of Earth and Elysium and writer/director Neill Blomkamp's latest human rights sci-fi offering never expresses any ideas more complex than that. The filmmaker, whose first feature benefited from the first year the Oscars moved back to 10 Best Picture nominees, disappoints with his second outing, rehashing ideas from such films as "Total Recall" (Max's grimy apartment and factory job are just like Douglas Quaid's in last year's remake) with the same dusty, rusty aesthetic as "District 9." On Elysium, a coup is afoot when Secretary of Defense Delacourt (Jodie Foster) ignores President Patel's (Faran Tahir, "Iron Man") more humanistic protocol and has her underground Earth agent Kruger (Sharlto Copley, "District 9") shoot missiles at three of Spider's illegal immigrant shuttles heading for Elysium. When the CEO of Max's factory, John Carlyle (William Fichtner, "The Lone Ranger") pays a visit, she offers him a guaranteed contract if he can deliver a program that will shut down Elysium's systems and reboot them with her own agenda. Carlyle agrees and encodes the program in his brain with lethal download protection. Retrieving this program becomes Max's mission and when Carlyle is targeted, Delacourt sics Kruger on him. There's also an unrequited romance when Max finds the adult Frey (Alice Braga, "I Am Legend," "Predators") in a clinic, now a doctor, but their reconnect puts her and her daughter Matilda (Emma Tremblay), a leukemia victim, in Kruger's sights. Damon's a reliable and likable actor, but except for some sarcasm directed at policing and parole 'bots, he's a generic action hero here. Better is Diego Luna ("Y Tu Mama Tambien") as Julio, an admirer of Max's car thieving days. Foster, whose character is supposed to be French, is icy and gets to trot out her fluency in a few lines, but her accented English is bizarre, sounding more South African than anything European. The film's third act is scattershot, coming to its conclusion like a derailed train. Villains are dispatched with little drama, the hippo and meerkat fable Matilda's told Max doesn't really resonate and a scene where Kruger's blasted off face is reconstructed suffers either from continuity problems or missing relevant details. I'm sure the last thing Blomkamp would have wanted is to end on a note that recalls "Oblivion," but that's just what happens in this visually interesting but otherwise mediocre effort.

It has been nearly five years since Neill Blomkamp made his stellar feature film debut with the wild “District 9.” Anticipation has been running high for his sophomore effort and the wait is finally over. Unfortunately, “Elysium” is not the film I have been waiting for. Director Blomkamp also wrote the screenplay for “Elysium” and that is where the problems with “Elysium” lie. What could have been a good sci-fi flick where the have nots want what the haves have and are willing to fight to the death for it is, instead, a convolution of plots. Max (Matt Damon) is one of the inmates on the dying planet Earth and works at the Armadyne Corporation. That company manufactures the robotic cops that protect Elysium and patrol the earth looking for any signs of rebellion among the proletariat. When such discontent is discovered, the ‘bots put a stop to it by any means and it seems that murderous violence is the only means they have. One day, working on the line, Max’s machine malfunctions and he is forced, by his overseer boss, to squeeze inside to clear the problem. Things go drastically wrong and Max is exposed to a lethal dose of radiation. He soon learns that he has just five days to live. At this point, Max goes renegade in order to get to Elysium and his only chance to be cured. He submits to the surgical implant of an exoskeleton that will give him super strength. The way you expect this to go is to have Max lead the vanguard of rebels, overthrow their rulers and bring the good life to everyone on Earth. Instead, things get overly complicated with one subplot that has Max and company trying to kidnap the CEO of Armadyne, Carlyle (William Fitchner), and extract the means to overthrow Elysium from his brain with Max brain as the recipient of that information. Of course, things go wrong and Max races the clock in order to survive and free the world. That seems like enough for one movie but Blomkamp has to tack on an additional plotline about a nurse, Frey (Alice Braga), who did Max a kindness and he takes it upon himself to save her and her child. The story keeps jumping around from Max’s quest for a cure, fighting the robots sent to kill him, protecting Fray and saving mankind. It is a tall order and not always met. Most of the characters that populate “Elysium” are mainly two-dimensional, especially second-billed Jody Foster as the power hungry executive, Delacourt, who has designs on the presidency of Elysium. This brings in yet another plot of court intrigue and Foster does nothing to give life to her not-as-bad-as-she-thinks bad guy. Sharlto Copley (star of “District 9”), on the other hand, does a good job as the evil human henchman who does not necessarily follow Delacourt’s orders. Diego Luna, as Max’s best friend Julio, is one of the few characters that you actually care about. Techs show “Elysium’s” estimated $100,000,000 and the sci-fi effects look good. Maybe, if Blomkamp had another writer to tight up the story, lose unnecessary story lines and simply had the battle between the 99% and the 1% (where the 99%, of course, triumph over the greedy 1%), things might have worked better.