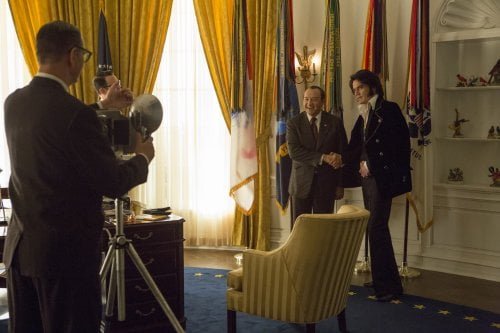 In December 1970, “The King,” Elvis Presley (Michael Shannon), wrote the president of the United States, Richard M. Nixon (Kevin Spacey), a letter requesting a meeting with the Leader of the Free World. This was just before the infamous tape recorders were installed in the Oval Office and exactly what was said between the two is just speculation. That speculated talk is brought to life in “Elvis & Nixon.”

When law enforcement fan Elvis Presley (Michael Shannon) finds out a lesser celebrity has a federal badge, he impulsively rounds up former staffer Jerry Schilling (Alex Pettyfer) and flies to Washington D.C. His limo pulls up to the North Gate of the White House, where he asks Marine Guards to deliver his handwritten letter to POTUS. White House staffer Egil Krogh (Colin Hanks) recognizes the PR opportunity, but both sides go through many contortions trying to arrange the meeting of "Elvis & Nixon." Based on Schilling's 'Me and a Guy Named Elvis' and Krogh's 'The Day Elvis Met Nixon' (both men consulted on the film - Nixon's recordings didn't commence until two months later), writers Joey & Hanala Sagal (both actors with small supporting roles) and "The Princess Bride's" Cary Elwes extrapolate a hilarious account of two seeming opposites coming together on commoner ground than we might have presumed. With Shannon digging into Presley's essence and Kevin Spacey creating perhaps the best representation of Nixon on screen to date, "Elvis & Nixon" is notable in how it marks the turbulent 70's as a more innocent time. Schilling, who left the Memphis Mafia because of Presley's all-consuming nature, has two big worries - to satisfy his old friend's current need and to be back in L.A. in time to meet fiancée Charlotte's (Sky Ferreira, "Putty Hill," "The Green Inferno") parents. He's joined by Presley pal Sonny (Johnny Knoxville), who's entrusted with keeping an eye on the King while Schilling strategizes. Meanwhile the jubilant Krogh pulls in fellow staffer Dwight Chapin (Evan Peters) to convince H.R. Haldeman (Tate Donovan) to approve the meeting (the reply - 'You must be kidding!' - but it's OKed). A grumpy Nixon, however, doesn't want to give up his 1 p.m. nap time slot. A Deep Throat-style parking garage meeting takes place between the four emissaries, who decide to leak the info to Nixon's daughter Julie, an Elvis fanatic, a masterstroke of manipulation. The politicking that took place to make the meeting happen is as much fun as the meeting itself. Perhaps the film's most jaw-dropping scene is the cross cutting between two protocol briefings ('if Elvis removes his sunglasses, it means...'), the presidential one completely disregarded by the King causing Nixon to awkwardly improvise. But once that awkwardness is overcome, Krogh is flabbergasted when his prearranged signal to extract Nixon is ignored, the two men connecting over shared hatreds and hobbies (the film implies it was Elvis who fingered Lennon as a 'communist subversive'). Shannon mines that upper elevation entitlement of the rich and famous while remaining down to earth with mere mortals. He finds it funny when American Airlines ticket agents or the Secret Service object to his concealed weapons. He has a way with the ladies. His naivete (he considers himself 'an expert in costume and disguise' due to his movie experience) baffles those around him. Spacey, all hunched, paranoid energy, turns the air blue with his peculiar proclamations while wielding presidential power (he orders a motorcade to get Schilling to the airport in time). Listening to Elvis's weird proposal about going undercover, he becomes a coconspirator. These two enjoy a communion of delusion. Support is strong across the board, Pettyfer, purportedly hand picked by Schilling, never better, Hanks endearing as the enthusiastic suit. Playwright Tracey Letts ('Bug,' 'Killer Joe') portrays John Finlator, chief at the Bureau of Narcotics & Dangerous Drugs. Director Liza Johnson ("Hateship Loveship") makes the most of a little. There are no Elvis songs on the soundtrack, which instead features such artists as Sam & Dave, Creedence Clearwater Revival, Sister Rosetta Tharpe and Otis Redding. Archival footage is used for traveling exterior shots, but the Oval office is convincing as is the diner Elvis slips away to for his 'original my ass maple bar.' The film is a fascinating account of two historic figures' meeting of the minds (the photograph of the two is the most requested of the National Archives). Elvis's anti-drug stance may be ironic, but "Elvis & Nixon" is a trip. Grade:

Based on the real event, with the photo of that meeting the most requested from the Federal National Archives, director Liza Johnson, with scribes Joey Sagal, Hanala Sagal and Cary Elwes (yes, that Cary Elwes), invent the words that transpired between the King and the President in privacy. The source material shows that, though the conversation between the two is not known exactly, the letter from Elvis to Nixon and the memoranda of Egil Krogh (Colin Hanks), Dwight Chapin (Evan Peters) and H.R. Haldeman (Tate Donovan), make the historic event convincingly real. Aside from looking and dressing the role (costuming is dead on), Michael Shannon does not give a broad parody of Elvis but one more thoughtful and bordering on naïve. (Elvis actually requested, of the President, a badge as Federal Special Agent for the Bureau of Narcotics and Dangerous Drugs – and got it!) He does the Elvis moves very well though, including his karate kick. Kevin Spacey, on the other hand, dives into his role as Tricky Dick and provides all the ticks and gestures of the man to great comedic effect. Colin Hanks does a solid job as Egil “Bud” Krogh, the interface between Nixon and Elvis. Alex Pettyfer plays Jerry Schilling, the King’s loyal and put upon assistant, and does it well. This wacky interpretation of what might have happened in the Oval Office is rich with humor. The private conversations between the two greats are outrageous and believable at once. The filmmakers stick to the facts of what did happen – Elvis flying by himself for the first time since he was 21; the ceremonial WWII Colt .45 pistol he brought as a gift for Nixon; Elvis carrying firearms into the White House; the letter he scribbled on his way to Washington; and, of course, the famous photo. “Elvis & Nixon” is based on true events and reinforces that old adage, “Fact is far stranger than fiction.”