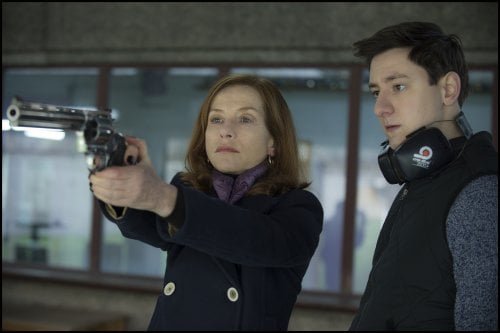 Michele Leblanc (Isabelle Huppert) is a hard-nosed businesswoman running a profitable video game company in Paris. One afternoon, while alone at home, she is attacked by a masked intruder and violently raped. Instead of falling apart, emotionally, she stiffens her resolve, without the help of the police, and begins a search for her attacker that will begin a game of wills in “Elle.”

In darkness, we hear breaking glass, a scream and grunts, before the first frame of director Paul Verhoeven's ("Basic Instinct," "Showgirls") "Elle" reveals Michèle Leblanc (Isabelle Huppert) bloodied on the floor as her black clad and masked rapist adjusts himself and flees the same way he entered. Michèle gets up, throws her clothing in the trash and takes a bath. The next morning, she arrives at her video game company and complains that the 'orgasmic' response of a woman being fantastically violated isn't strong enough. "Elle," adapted from Philippe Djian's novel by David Birke, is an intense character study of a woman who not only refuses to be a victim, but engages in cat and mouse play with her assailant. One cannot imagine anyone but the great French actress Huppert pulling a role like this off and she is the compelling reason to see a film which offers motivations while remaining staunchly ambiguous. Michèle is a pile of contradictions. She runs her company with her best friend Anna (Anne Consigny, "The Diving Bell and the Butterfly"), but has no compunctions about having an affair with Anna's husband Robert (Christian Berkel, "Trumbo"). Yet she finds her mother Irène's (Judith Magre, "The Lovers") penchant for gigolos distasteful. She left her ex, Richard Leblanc (Charles Berling, "Summer Hours"), yet seems unduly jealous when she learns he's taken up with young yoga instructor Hélène (Vimala Pons, "Around a Small Mountain"). She's fed up with her adult son Vincent's (Jonas Bloquet, "The Family") lack of ambition and hates his pregnant fiancee Josie (Alice Isaaz), but agrees to front him three months rent and buys them a new TV. When it becomes clear her rapist is not only not finished with her, but has creepy access, Michèle buys pepper spray and asks her most devoted employee, Kevin (Arthur Mazet), to teach her how to shoot. He's the guy she turns to again when a copy of the video game clip we saw earlier is emailed to her entire company and her face has replaced the game victim's. There are so many weird developments here, including Hélène's cheerful description of the horrific circumstances of her youth (and the reason she did not report her rape) to her new neighbor Patrick (Laurent Lafitte, "Mood Indigo") at her Christmas Eve gathering, that it is best to know little about them going into the film. Catholicism is a continual theme, one of many things that lend a blackly humorous air to Verhoeven's Hitchcockian film. The film's climax takes place in a basement cast in hellish reds. "Elle," like its heroine, is an enigma, but Huppert's monumental talent is crystal clear. Grade:

Paul Verhoeven, to me, is about as enigmatic a filmmaker as can be and a tough one to pigeonhole. The first of his films that I saw was “Soldier of Orange (1977),” which also introduced me to longtime Verhoeven star and collaborator Rutger Hauer. The director went on to other eclectic and varied films as “Spetters (1980),” “Robocop (1987),” “Basic Instinct (1992),” “Showgirls (1995)” and “Starship Troopers (1997).” He has been off of the filmmaking grid for a few years and I would not have guessed that he would return with the adaptation of a French novel by Philippe Djian starring the iconic Isabelle Huppert. The film begins in black but with the sound of a brutal attack and rape. The first thing we see is a cat watching and the attacker kneeling over the still body of a woman as he finishes his deed and leaves. The woman, Michele, recovers quickly but then does the unexpected: she cleans up the broken debris from the attack, throws the clothes she was wearing into the trash and takes a bath. She never calls the police. This is when we learn that Michele is not a conventional person but one who has a famously notorious past. This past (I will leave it to you to find out) has shaped her all of her life, turning her into a woman under great inner control who eschews the system and deals with such mundane subjects, such as her rape, as everyday things that she compartmentalizes to resolve. This control extends to her family, especially her weak-willed son, Vincent (Jonas Bloquet), who is bullied by his diminutive and pregnant girlfriend, Josie (Alice Isaaz). Michele also maintains this control over her ex-husband, Richard (Charles Berling), the employees of her company and her friends. This becomes evident when she casually tells her family and friends about the rape – “It’s nothing.” And, to her, it is as she begins her investigation to find her attacker in a cold and calculating way. Isabelle Huppert is an acting force to be reckoned with every time I see her. Here, as Elle, she may be diminutive in stature but her force of will cannot be matched. She is in control of her life, every aspect, and extends that controlling influence to all around her. The women in “Elle,” while nowhere near as intimidating as Michele, are strong and focused, even when manipulated by the titular puppet master. The men, on the other hand, are uniformly weak willed (with just one exception, the character Robert (Christian Berkel)), and even more manipulated by Michelle. What I am saying is: this film belongs to Isabelle Huppert. It is refreshing to see director Verhoeven do a serious, though often satirical, French drama with an edge of thriller thrown in. (Although, to me it seemed obvious who the attacker is, but that does not diminish the stylish storytelling.) The supporting cast does a fine job in creating their individual personas – I remembered all of the names and their personalities, something I rarely do watching a movie, especially one with such a diverse roster of actors. Huppert is on my short list as best actress this year for a powerhouse performance.