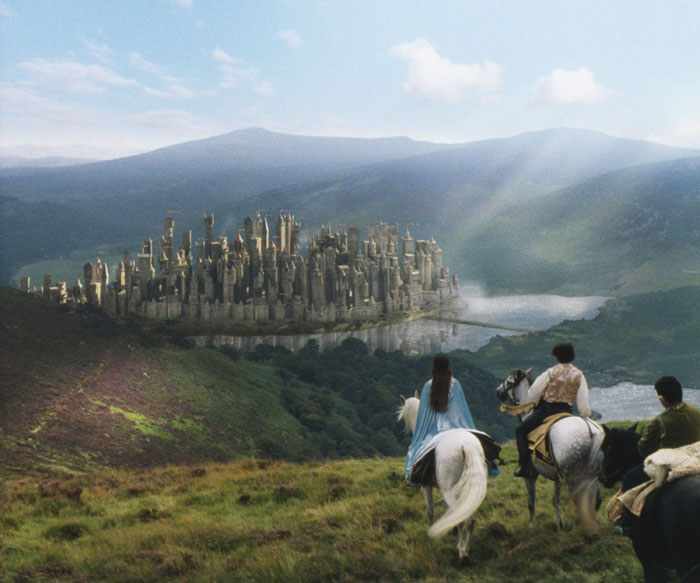 When Ella of Frell (Anne Hathaway, "The Princess Diaries") is born her mother and nanny (Minnie Driver, "Owning Mahowney") try, and fail, to save her from receiving the gift of Fairy Lucinda (Vivica A. Fox, "Kill Bill"). Years later, Lucinda's gift of obedience becomes a real burden when it is discovered not only by her stepsister Hattie (Lucy Punch, "Greenfingers"), the president of Prince Charmont's (Hugh Dancy, "Black Hawk Down") fan club, but by Prince Regent Edgar (Cary Elwes, "The Cat's Meow"), who decides that the perfect weapon to get rid of his nephew is an "Ella Enchanted." This anachronistic Cinderella with a twist displays the same warped humor and fairy tale awareness of "Shrek." Hathaway has improved leaps and bounds since her "Diary" days, dropping the mugging for a more naturally energetic charm - and she can sing! Monty Pythoner Eric Idle's presence as a rhyming narrator is the first hint that "Ella Enchanted" will be treated with good-natured irreverence for the fairy tale format. Ella grows up literally obeying such commands as 'Bite me!' but it isn't until her widowed father remarries that anyone seems to notice. The arrival of her new stepmother, Dame Olga (Joanna Lumley, "Absolutely Fabulous"), in a carriage tricked up like a New York checker cab, means big changes for Ella. Her stepsister Hattie is hideous, immediately making demands and lording it about, behavior which is copied by her younger, dumber sister Olive (Jennifer Higham). When Ella and Hattie are partnered in a debate at Frell Community College, Hattie figures out what everyone else has missed - that Ella cannot not obey - and uses it to her advantage, beginning with some shoplifting at the Frell Galleria. Ella disdains Hattie's obsession over Prince Char, seeing him as politically corrupt rather than hunky. When Prince Char comes to town to open the new Galleria mall, hundreds of screaming girls are their to greet him, with Hattie bearing a banner proclaiming 'Prince Char Rules!' In stark contrast are Ella and her best friend Areida (Parminder K. Nagra, "Bend It Like Beckham"), who use the opportunity to protest the enslavement of giants and poor treatment of ogres. Hattie demands that Ella return home and as she makes her way she bumps into Char, running from his fans. Ella's contempt intrigues the prince and soon Ella's not the only one who is enchanted. Eventually Ella learns that the Prince is simply naive, but when her political influence begins to take hold, the Prince Regent decides they must be gotten rid of. Hathaway is put through her paces, not only having a go at Queen's "Somebody to Love," but delivering 'rabbit punches' and kickboxing `a la "Shrek's" Princess Fiona. (One could pick a small screenwriting nit that Ella's obedience gift shouldn't necessarily enable her to perform martial arts and freeze suspended mid-air.) Her many adventures traveling towards the palace include rescuing an elf (Aidan McArdle) who wants to become a lawyer (all elves must only perform as entertainers under Edgar's administration) and almost being eaten by ogres. She's saved from that fate by Char and Dancy and Hathaway exhibit lovely chemistry together. Dancy shows the influence of a good woman, moving from amused apathy towards leadership. "Ella Enchanted" should prove a good springboard for the handsome young actor (and, having placed two princesses, Hathaway has wisely signed up for Ang Lee's next film). Elwes delivers a conniving villain, ably assisted by Steve Coogan ("24 Hour Party People"), who provides the voice of his advisor Heston, a CGI-created snake which wraps itself around Edgar's scepter. Lumley keeps her face screwed up like everything stinks but her, with Punch and Higham accessorizing her greed with their own unbecoming traits. The rest of the supporting cast are only required to play one note, with Driver a ditz and Jimi Mistry ("The Guru") a talking head inside a book. Most underutilized are Patrick Bergin ("Sleeping with the Enemy") as Ella's apparently clueless father and Parminder Nagra who seems to have wandered onto the set and joined in. Director Tommy O'Haver ("Get Over It!," "Billy's Hollywood Screen Kiss") isn't always successful getting his supporting players properly into the mix and he seems to have let a point about discrimination regarding Nagra's character get buried. He did, however, set screenwriters Laurie Craig, Karen McCullah Lutz and Kirsten Smith to work 'modernizing' Gail Carson Levine's award winning novel. Among their innovations are the Frell Galleria, complete with wood planked, hand-cranked 'escalators,' Medieval Teen magazine and Bat-Ox treatments at the IV Seasons hotel. Production designer Norman Garwood ("Brazil") based the palace city of Lamia on New York City's skyline. Art Direction by Anna Rackard ("The Medallion") combines the cozy, flower-draped cottages of fairy lore with more modern concepts like closet space. "Ella Enchanted" is not only sweet, but delivers strong messages about self-reliance and political activism. It's a terrific film for young girls and its humor is cutting edge enough to engage the rest of the family too.