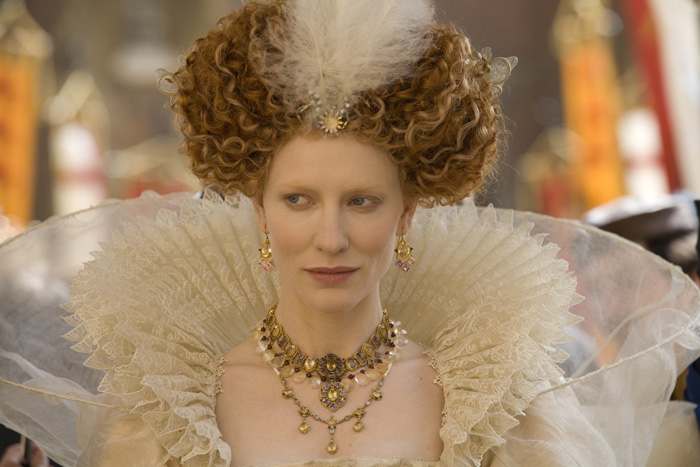 In 1585, Spain is the leading world power and its King, Philip II (Jordi Mollà, "Blow," "Bad Boys II," "The Alamo"), is using his Inquisition to ensure Catholicism is everyone's true religion. With a conspirator in Scotland's Papist Queen Mary Stuart (Samantha Morton, "Minority Report," "The Libertine"), imprisoned in Lochleven Castle but colluding with Catholic spies throughout Great Britain, Philip is determined to topple the English Protestant Queen in "Elizabeth: The Golden Age."

1998's "Elizabeth," directed by "The Bandit Queen's" Shekhar Kapur, was a terrific film and a breakout role for its star, Cate Blanchett, so a sequel beginning ten years after the first film ended would appear a sure thing, but something has gone horribly wrong. Sexual politics dominate "The Golden Age," rendering the middle-aged Elizabeth more love sick adolescent than conquering warrior in this borderline bodice ripper. Blanchett is still a fine actress, always interesting to watch, but she's trumped here by a more astute performance in a smaller role by Samantha Morton. Costar Clive Owen ("Children of Men," "Shoot 'Em Up") is also abused, his Sir Walter Raleigh more hunky Errol Flynn than live historical character. Abbie Cornish has given some fine performances, but her Bess is beautiful but bland and there is no sexual spark between her and Owen. When Raleigh comes to court bearing gifts of potatoes, tobacco and pirated gold, he charms the Queen but ires the Spanish Ambassador. Elizabeth is still resisting the efforts of her advisors to find her a husband (a callow Austrian prince seems relieved by her candor in dismissing him), but her obvious attraction to Raleigh must be channeled through her most trusted lady in waiting, Elizabeth Throckmorton (Abbie Cornish, "Somersault," "A Good Year"). When 'Bess' succeeds in bedding him, Elizabeth flies off in a rage, having him arrested and her banished from court. Across the ocean, a foncy Philip is deforesting his country to build an Armada that will attack England with a force the country has yet to reckon with. Elizabeth consults Dr. John Dee (David Threlfall, "Hot Fuzz"), her seer, and learns there are 'dark days ahead,' but presses him on matters personal. Good thing her counsel, Sir Francis Walsingham (Geoffrey Rush, 1998's "Elizabeth") is sniffing out an assassination plot with his trusty torture devices (his own brother and Bess's cousin are part of the Papist plot, led by Philip's underground emissary Robert Reston (Rhys Ifans, "Notting Hill," "Danny Deckchair," giving a much needed jolt of sinister support). When Mary is revealed to have a hand in the proceedings, a reluctant Elizabeth is forced to agree to her execution (Morton's reaction to the news and behavior during the deed provide two of the film's most riveting scenes, but Kapur's handling of her story plays like a greatest hits moment of Elizabeth's life.) When the Armada comes a'calling, Elizabeth, who was supposed to be in her fifties at the time, addresses her men with her fiery locks flowing, in a suit of armor that looks like it came from "Francis Ford Coppola's Dracula" sprayed silver, astride a white horse. Raleigh is forgiven and called into battle where he single handedly aims a CGI 'fire ship' at one of Spain's galleons, then swings on a rope Captain Jack style and dives underwater to swim to safety (who knew we'd be treated to underwater stunts in "The Golden Age?"). Elizabeth celebrates her victory by running across a verdant cliff in flowing white nightgown at dawn as if auditioning for an Annie Lennox video. The whole thing is set to original music by Craig Armstrong ("World Trade Center") and A.R. Rahman ("Provoked: A True Story") that makes sure we are paying attention. Costume Design by Alexandra Byrne ("The Phantom of the Opera") is worthy of the Rose Bowl Parade, as Elizabeth is frequently surrounded by mesh covered contraptions that make her look like a float. Blanchett's makeup and hair are fastidiously done, but never suggest a fifty year-old. "Elizabeth: The Golden Age" belies its heritage. While Blanchett may depart unscathed, it must be said that Mirren did it before and better.