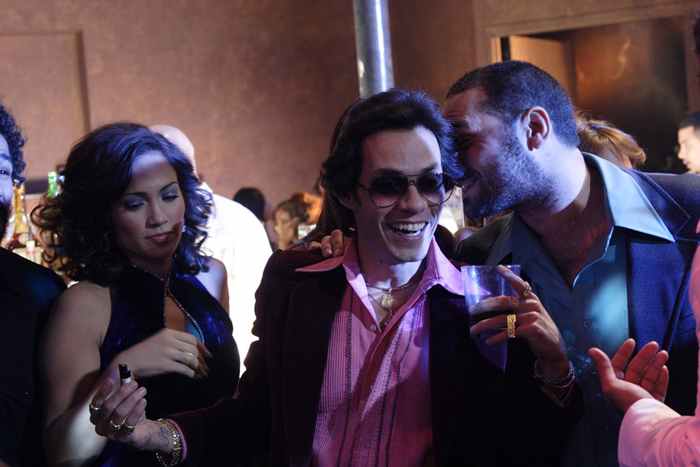 In the early 1960's Puerto Rican singer Hector Perez came to New York City to pursue a dream. He was immediately noticed by record producer Johnny Pacheco who pairs him up with trombonist bandleader Willie Colon and rechristens him as Hector Lavoe. The new duo create the sound that's known as salsa. Years later, a young musician called Ruben Blades presented him with his signature song - "El Cantante."

Producer Jennifer Lopez, who stars as Hector's wife Puchi, claims to have had Marc Anthony in mind for the title role before they became an item and her instincts were right - the only reason to see "El Cantante" are for the sizzling salsa numbers Anthony performs with mesmerizing stage presence. The rest of this biopic falls flat because it fails to illuminate its audience with any real understanding of Lavoe, his place in the music industry or the movement he created. And as happens all too frequently with real life couples on screen, Lopez and Anthony generate little in the way of chemistry. A framing devices features a subtly aged Lopez defiant and foul mouthed as an interview subject for a documentary on her husband in 1985. We transported back to Puerto Rico for a classic father/son schism when Hector decides to leave his native land. The 'welcome to 1963 New York' montage which follows is mostly about the Beatles and James Bond - Swinging London? Certainly not the Bronx. Director Leon Ichaso ("Piñero") then takes his frantic cameras into the Latin clubs where Hector is soon on stage and Puchi regularly dances. When he crashes her birthday party, she introduces him to pot - he ends up heaving and a romance is born. "El Cantante" offers Puchi's later observation that her husband's personal life went into a downward spiral just as he achieved the height of his artistic power as if it were profound instead of the basis of just about every musical biopic ever filmed. Salsa, we are told, is different because Colon played trombone instead of the more traditional sax - that's our explanation for an entire movement. On the plus side, JLo has the sense to make her Puchi at least partially responsible for Lavoe's destructive tendencies. She's so domineering, she literally rips him from his orgiastic bachelor party to give her his name. "El Cantante's" few humorous moments work, but the drama just never engages and I still have no idea what made Hector Lavoe tick and just why he was supposed to be so important.