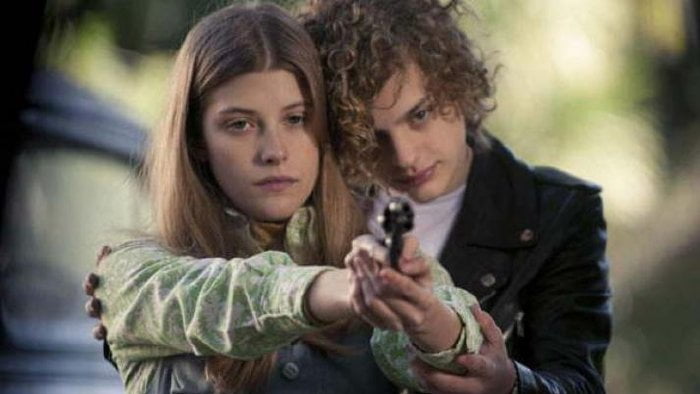 Do not let Carlos’s (Lorenzo Ferro) cherubic-look fool you. He is, in a word, a sociopath. The innocent-looking baby-faced teen is not troubled by the consequences of his break-ins, thefts, joy rides in stolen cars and much worse. When he is sent to yet another “special” school, he meets older Ramon (Chino Darin) and, with Ramon’s father Jose (Daniel Fanego), forms a crime ring in “The Angel (El Angel).”

Cowriter (with Sergio Olguín, Rodolfo Palacios)/director Luis Ortega dramatizes the true story of Carlos Eduardo Robledo Puch, the teenaged sociopath convicted of robberies, rapes and murders in 1970's Buenos Aires dubbed 'the angel' because of his baby-faced good looks. This is the second Argentinean true crime story to open in the U.S. in recent years, following Pablo Trapero's "The Clan," which, coincidentally, was also dramatized by Ortega as a television mini-series 'Historia de un clan.' The film is visually striking, utilizing a color scheme favoring cedars and teals, well acted by lead Lorenzo Ferro and Luis Gnecco ("Aurora," "Neruda) as his criminal mentor, and inventively orchestrated with a series of changing instruments (the xylophone!), but when all is said and done, the film fails to justify itself, an empty exercise which offers no perspective on Carlos's crimes. Oddly, Ortega neglects to include Carlos's rapes among his crimes, instead giving him and his accomplice Ramón (Chino Darín) twin girlfriends (Malena Villa). "El Angel" also stars producer Pedro Almodovar favorite, Cecilia Roth as Carlos's mother. Grade:

There is something creepy about “The Angel” that is beyond its thoroughly amoral title character. Carlos looks suitably innocent and is a smooth talker but there is an inherent evil in him that I found disturbing. I do not mean that the character disturbs, which he does, but something in it that I found frighteningly real. (It is based on real life Argentine serial killer Carlos Eduardo Robledo Puch and his year long murder and crime spree before his arrest and life imprisonment at the tender age of 20.) Director and co-writer, with Sergio Olguin and Rodolfo Palacious, paint a very somber picture of Buenos Ares, circa 1971, where the directionless 19-year old psychopath can cut a swath of crime and murder without legal consequence – until the dramatic film finale. But, I found that I did not want to know about the young Angel of Death, keeping the film at arm’s length with its sordid real-life story.