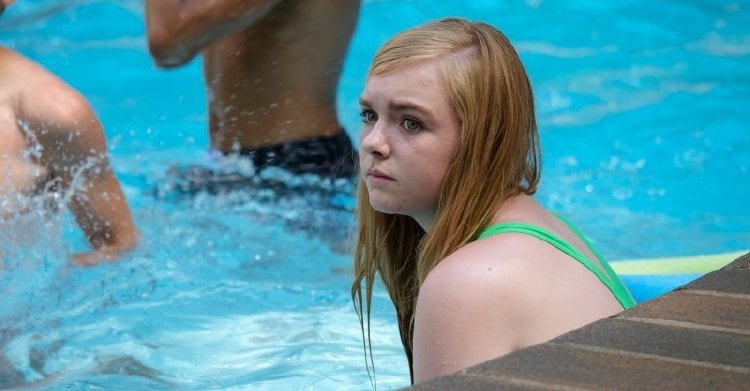 Kayla (Elsie Fisher) is a typical young teenage girl in the new millennium. Spending all her time on social media and posting her self help videos, she really does not have any friends. And, her single dad, Mark (Josh Hamilton), is having his own problems with raising his emotionally volatile child who is about to graduate “Eighth Grade.”

A typical thirteen year-old girl, Kayla (Elsie Fisher), makes a series of supportive Youtube videos encouraging others to be themselves. They're studded with 'ums' and 'likes' and end with requests for shares. But the next morning, the same girl, now heavily made up, posts a humble brag selfie decrying the 'state' she is in upon waking and at school she hardly speaks. Kayla is in the trenches, navigating the treacherous pitfalls of the "Eighth Grade." Writer/director Bo Burnham is a comedian, singer/songwriter/musician, actor and poet, but to the best of my knowledge, he's never been a thirteen year-old girl, which makes his feature film debut all the more impressive. This beautifully written work never leans on extreme events to relate just how difficult socializing can be at this age, instead investing the everyday with its protagonist's tortured perspective. Fisher, best known for voicing "Despicable Me's" orphaned Agnes, is a natural, her stubborn self-reliance slowly giving way to her single dad's gentle concern, her conflicted response to social pressures relatable, her lack of vanity that of a true actress. When popular girl Kennedy's (Catherine Oliviere) mom invites Kayla to Kennedy's birthday pool party, Kayla demurs, fully aware that her classmate doesn't want her there. Preparing to leave middle school, the eighth grade opens their sixth grade 'time capsules' and votes on class superlatives, Kayla swooning over 'Best Eyes' Aiden (Luke Prael). Warned that he only dates girls willing to share nude photos, Kayla awkwardly hints at her own, earning her first glancing flicker of interest. At home, Kayla's dad Mark (Josh Hamilton) tries every which way to engage her but is shut out by phones, earbuds and laptops, behavior easily accepted as that of a 'typical' sullen teenager. Kayla does go to that pool party in the end and Burnham's staged it to great effect, a crushing experience of invisibility and a spotlight. Fisher, slightly overwhelming her lime green suit, her slumped shoulders signaling a desire to hide, is only addressed by Kennedy's dorky cousin Gabe (Jack Ryan, "Moonrise Kingdom"), his lack of social 'cool' filter the true expression of being oneself. Cruelly cut down by Kennedy's reception of her gift, Kayla hides, calling dad to pick her up, responding with tongue-tied stuttering when Aiden points out where the rest of the party is. Things look up when Kayla becomes the 'shadow' of Olivia (Emily Robinson), the friendly high schooler assigned to guide her through her future environs. She's invited to hang with Olivia and her friends at the mall and glows in the acceptance. But she flips out when she spots her dad observing from a higher floor and her refusal to accept his ride home leads to a glimpse of new obstacles which await. And yet Burnham finds his way to a hopeful, even happy ending, Kayla finding her voice in more ways than one. Fisher is well supported, Hamilton especially strong as the single dad terrified of saying or doing the wrong thing yet ever, patiently vigilant. Burnham's craftsmanship excels not only in guiding his actors and shaping his narrative, but visually and aurally with strong composition, great use of sound and flair for song selection. Grade:

It seems funny, to me, for a 66-year old film critic to be reviewing a movie about a 13-year old girl coping with the trials and tribulations of junior high school life. But, with “Eighth Grade,” debut feature writer-director Bo Burnham, with a convincing Elsie Fisher, creates a fresh and funny look at that teen life in the New Millennium. One observation that I made, the old guy who was a teen during the turbulent 1960s, is that the adolescent world now has very little in common with that of my days. And. the main difference is that the new world is dominated by social media and not personal social interaction. I have to admit, I was a stranger in a strange land as I traversed the angst- and hope-ridden life of Kayla as she transitions from the daily trials of being an eighth grader on the eve of graduation to the hopes and fears of high school life. “Eighth Grade” is a coming of age film, one of many that have been coming out since “The Blue Lagoon (1980)” with Brooke Shields. Elsie Fisher’s Kayla is a bundle of energy and freely gives advice to others via her video blogs about “Being Yourself,” “Putting Yourself Out There,” How To Be Confident” and “Growing Up.” Unfortunately, the insecure Kayla is not the one to give such advice, until she actually takes it. The supporting cast does a fine job across the board, but Josh Hamilton, as Kayla’s dad, Mark, really strikes a strong note as a husband and father who lost his wife and has had to raise a daughter on his own. His fears, anxieties, protectiveness and love come through, garnering sympathy, at least from me. I may be on the wrong end of the age spectrum to really know how “Eighth Grade” will strike the target audience – teens, not just teen girls. But, I think they will like it.