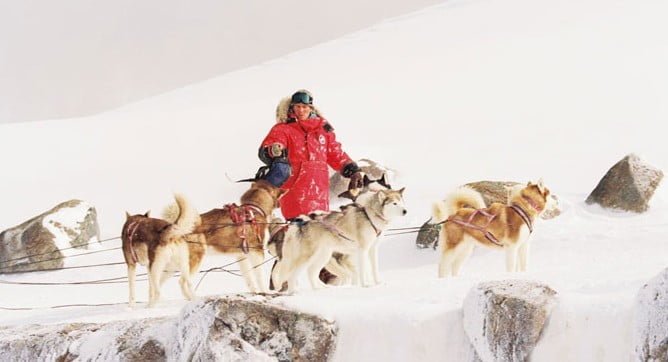 Jerry Shepard's (Paul Walker, "The Fast and the Furious" and the upcoming "Running Scared") last relationship with a woman, Katie (Moon Bloodgood, "A Lot Like Love"), the pilot who transports him and his colleagues to the NSF research base in Antarctica where he spends half the year, was two years prior. Jerry's lifestyle only supports a relationship with the eight sled dogs he is dedicated to and he is shattered when an emergency evacuation forces him to leave the "Eight Below."

Working from a script by David DiGilio 'inspired by' the Japanese film "Nankyoku Monogatari" (which was itself inspired by a true story from the 50's), director Frank Marshall ("Arachnophobia," "Congo") delivers an absorbing animal adventure yarn that should tie any dog lover's stomach up in knots. The humans may be two-dimensional, but, with one exception, they're believable enough genre characters and Paul Walker really punches through his character's professional capability and love and respect for his working dogs. The film begins with a jokey interlude that brings home the extremes that mother nature is capable of. Jerry and his cartographer buddy Cooper (Jason Biggs, "American Pie," "Anything Else") take a sauna to 111 degrees, then run outside to verify that it is 31 below zero. Then we're introduced to Maya, Max, Shorty, Shadow, Truman, Dewey, Buck and Old Jack, the dogs who sleep outside in this weather, burrowed into little snow caves of their own making. The arrival of Dr. Davis McClaren (Bruce Greenwood, "Ararat," "Capote") gives us the occasion to meet these dogs and learn their backgrounds. Maya (Koda Bear) is the talented lead dog, Max (D.J.) the 'youngster' in training. The all white Shorty (Jasper) isn't too bright, but packs lots of brawn. Dewey (Floyd) and Truman (Sitka) are twin brothers. Shadow (Noble) is the pack's handsome dog and Buck (Dino) is known for his exuberant greetings. Old Jack (Apache) is approaching retirement and probably working his last year on the team. McClaren has travelled half way around the world in search of a meteor that initiated on the planet Mercury which he believes can be found on a mountain in an area Jerry now believes is too dangerous to get to this close to winter. He's overruled by his boss, Andy Harrison (Gerard Plunkett, "Two for the Money"), and so does his best to accomplish his mission. The journey demonstrates the incredible ability of the dogs and the science of positioning them for different conditions, such as crossing ice fields. McClaren proves to be ambitiously goal-driven but none too bright about safety factors. When the duo arrive at the site, their radioed that a major storm is coming in and they must return immediately, but Davis begs to be allowed a half day to search for his meteor (this after chiding Jerry for not standing up to Andy if he thought the journey too dangerous). The doc gets his rock, but has an accident on the return, breaking his leg in a fall and breaking through ice. He's saved by a coordinated effort of the dog team and they just barely make it back to base. When the evacuation orders come in, Katie's plane can't take the added weight of the dogs but she promises Jerry they'll return immediately for them. Unfortunately once at main camp the worsening weather keeps them grounded. Jerry tries everything to get back to the dogs, from government grants to pitches to local television crews, but nothing works and as the months begin to pile up he goes into a personal tailspin. A appeal to McClaren's guilt only gets him advise to let the unfortunate issue go, but eventually the innocent drawing of his young son Eric (Connor Christopher Levins, "SuperBabies: Baby Geniuses 2") and the remains of his funding persuade the geologist to do the right thing. Marshall shuttles us back and forth between Jerry's northern efforts and the amazing survival story going on below. After all but one of the dogs manage to break free of their leads, Maya takes charge, finding ways to procure food from the wild and establishing a self-sustaining society within the pack. The dogs encounter dangers like incredibly vicious leopard seals, brutal storms and shifting terrains. Even their joys, such as dancing in the reflection of Northern Lights, come with hidden perils. And Max, the newbie, exhibits both compassion and heroism. Marshall and his team of animal trainers (led by Mike Alexander, "Homeward Bound") achieve terrific performances from the dogs (all of the dogs had doubles for the sledding scenes), each of whom establishes his own unique personality. It is truly thrilling to watch these dogs work together to herd birds, lure an animatronic seal away from a food source and protect and encourage their own. The filmmakers smartly establish these dogs worth, making it all the more painful awaiting their rescue. Marshall is almost sadistic, noting the date and number of days the dogs have been alone each time he returns to them and, in truth, the film runs a little long as Jerry and his mates hit one obstacle after another getting back, not knowing what they'll find. Canada, Alaska, Greenland and Norway are convincing stand ins for Antarctica with their extreme conditions and vast remoteness. Mark Isham's ("Crash") score is subtle, occasionally emphasizing extremes without ever feeling manipulative. "Eight Below" is a thrilling, sometimes excruciating adventure and a real testament to the spirit and intelligence of the working animals at its core.

The fierce Antarctic winter is fast approaching and with it the storm of the century. Survival guide Jerry Shephard (Paul Walker) is on the team at the American science station in this wilderness and they all must leave before the coming blizzard. Jerry grudgingly tethers his team of eight sled dogs with the assurance from skilled bush pilot, Katie (Moon Bloodgood), that they will return to retrieve the dogs. This begins a based-on-true-life tale of love and survival in “8 Below.” Just as the station is preparing to end its summer season and head home from the Antarctic wasteland, scientist Davis “Doc” McLaren (Bruce Greenwood) arrives on the scene. He just needs a little time to search for a meteor that may have come from the planet Mercury. With the ice flows dangerously thin from the summer thaw, Doc must rely on Jerry and his wonderful dogs to ferry him to and from the site. The mission is a success, but not without near tragedy when Doc falls, smashing his leg, and breaks through the ice. Jerry and his kids save the day and bring the injured scientist back to base. The approaching storm forces the science team, which includes Jerry’s best friend, cartographer Charlie Cooper (Jason Biggs), to abandon the station and, temporarily, the dogs – Maya, Max, Old Jack, Shadow, Buck, twins Truman and Dewey and Shorty. But, the storm descends more quickly than expected and Jerry must face the painful fact that his beloved dogs are stranded during the darkest, coldest time of year on the entire earth. Director Frank Marshall utilizes the screenplay by David DiGilio, “suggested by the film ‘Nankyoku Monogatari (Japan 1983)’,” about a dog sled team inadvertently abandoned and their survival through the harshest conditions in the world. Marshal and his team Hollywoodize this idea and come up with a solid, if a by-the-numbers, piece of work that gets you at an emotional level – mainly, though not totally, via the canine heroes – making “8 Below” a rousing and entertaining family adventure. The dogs, by far, exhibit the most by way of real personality. From lead dog, Maya, to the rookie, Max, you develop an emotional bond with these beautiful critters. When they lose a member of their pack, their pain is ours. Even though you know the outcome going in, you cheer for the dogs’ survival. The human players don’t fare quite as well as the dogs though Paul Walker does yeoman’s work as the loving caretaker of the canines. It won’t win him an Oscar but his Jerry is a likable, caring bloke who thinks about his ward before himself. Jason Biggs is an amusing sidekick but his haircut and costume make me think about the old comic strip, Dondi, with both he and Coop looking like war orphans. Bruce Greenwood is saddled with the super-smart scientist who does dumb things role. Moon Bloodgood is pretty and suitably rugged for the dual role of pilot and love interest. Techs do a good (though not great) job in depicting the harsh, violent conditions with Greenland, Norway and Smithers, Canada standing in for the Antarctic wilds. Most of the animal action is with the stalwart pooches but some CGI is used to depict a very pissed off leopard seal – a big, mean bugger. David DiGilio’s screenplay is a little clunky and obvious but it has a good heart. This is definitely solid, entertaining family fare that should do well at the theaters and even better on DVD and video.