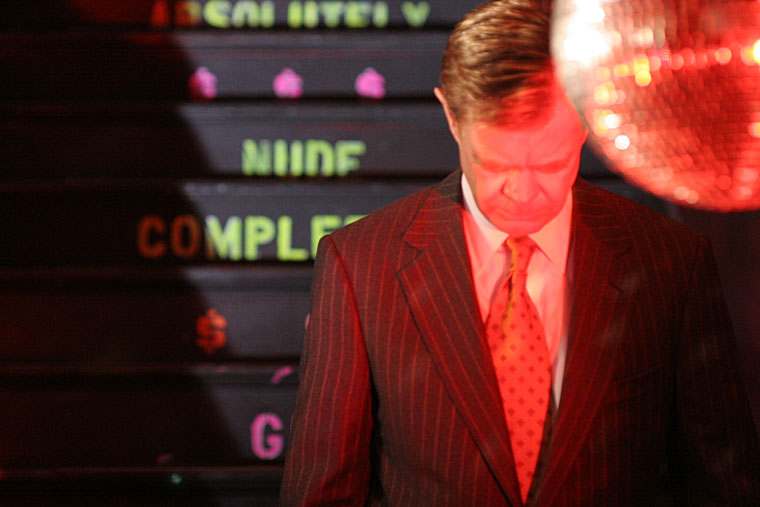 A man is told by a fortune teller (Frances Bay, "The Wedding Planner") that he is not where he belongs and so he goes home and tells his wife (Mamet's wife, Rebecca Pidgeon, "Heist") he's leaving her and steps off into the abyss in "Edmond") Director of Lovecraftian horrors Stuart Gordon ("Re-Animator," "King of the Ants") may seem an odd choice for a David Mamet play (Mamet, "Spartan," adapted the screenplay), but Gordon brings this hellish and funny look at one man's freefall into his basest instincts just the right touch of reality viewed through fun house mirrors. Each stop along Edmond's hellish journey is its own set piece, spot lighted yet never stage bound, like Rod Serling's walk through the "Night Gallery." That fortune teller seems startled by the card that keeps cropping up - the Hierophant, an initiator into secret rites, who might be the man in a bar (Joe Mantegna, "Searching for Bobby Fischer") that is Edmond's (William H. Macy, "Spartan," "Thank You for Smoking") first stop, who fumes with racial hatred, or it could be the madam at the Atlantic Leisure Club (Debi Mazar, HBO's "Entourage"). Edmond, who wants depravity but questions its price ('That's too much!'), demands change from a peep show girl (Ling Bai, "The Crow," "Lords of Dogtown") and nickel and dimes a hooker (Mena Suvari, "Domino"). He is reduced to pawning a ring (to George Wendt of TV's "Cheers," convincingly playing Russian), then defends his cash with primal bloodlust from a Black pimp. Edmond seems to meet his spiritual ally in diner waitress Glenna (Julia Stiles, "State and Main," "The Bourne Supremacy"), but when his intensity scares her things go horribly wrong. Perennial Mamet actor Macy is one of the best at delivering the writer's stylized dialogue and he pulls off the near impossible, maintaining likability while acting atrociously. Macy gives Edmond a dimension of howling at the moon, a compact man spewing volumes of pent up rage. He's terrific with Stiles, another Mamet vet, and their extended scene together is a great actors' piece, with constantly evolving tonal and emotional forces. "Edmond" goes to some very dark places, but its cheeky attitude keeps any outrage at its offensiveness in check. Step into a House of Horrors but ride a Tilt-a-Whirl.