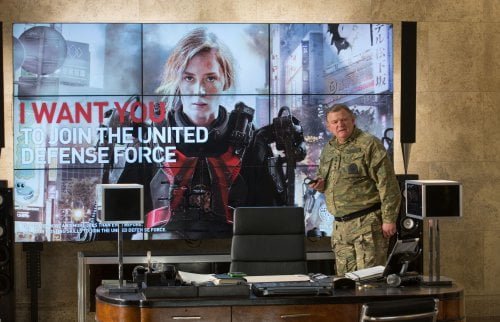 With the world under unrelenting attack by Alien 'mimics,' United Defense Force’s Major William Cage (Tom Cruise), a PR officer who's never seen combat, is dropped into a suicide mission and quickly killed. But he awakens where he started the day before, where Special Forces 'Angel of Verdun' Rita Vrataski (Emily Blunt, "Looper") told him to seek her out and she trains him to advance the battle within a time loop that keeps on bringing him to the "Edge of Tomorrow."

The 'Groundhog Day' comparisons have been obvious since the film's trailer appeared, but is that all there is? Adapted by Christopher McQuarrie ("Jack Reacher") and Jez & John-Henry Butterworth ("Fair Game") from the novel 'All You Need Is Kill,' every aspect of the film that's enjoyable has to do with its time tripping. Director Doug Liman ("The Bourne Identity") has staged some adrenaline, D-Day inspired action sequences, Blunt is an impressive and soulful warrior and a lot of humor is derived from turning the Cruise persona on its head, but the raison d'etre for the time loop is so much sci-fi mumbo jumbo, the politics both behind the invasion and the global resistance non existent. "Edge of Tomorrow" is a fun ride that never really arrives anywhere. Instead of the usual gung-ho man of action, here Cruise is an entitled officer who tries to wriggle out of General Brigham's (Brendan Gleeson) order to lead a team of cameramen into battle. His cowardice gets him arrested, demoted and thrown into the front lines. Master Sergeant Farell (Bill Paxton) regards him as little more than dirt and the members of his J Squad cannot be bothered to explain anything. His introduction to just what United Defense Force has been up against is terrifying, all the more so because their 'surprise' attack is wholly anticipated. Just trying to survive, Cage takes out an enormous mimic, and is surprised to cross paths with the Force's poster girl, Vrataski, who mysteriously tells him to 'come and find her' moments before he meets his end. Pow - Cage comes to just where he was the day before when he first encountered Farell and begins riffing on events he already knows. It takes some doing to get away and find Vrataski (one attempt results in a 'humorous' death) and she's not happy to have her training interrupted - until he explains that she herself sent him. After a couple of more knowledgeable but no more successful attempts at the landing, Vrataski gets Cage to meet Dr. Carter (Noah Taylor, "The Double") for some exposition on what's going on and why just trying to tell the brass will get them nowhere. Most of the action is front loaded. J Squad, outfitted in metal, armed robotic suits, hang on lines within a transport plane whose bottom opens to reveal sheer terror. The plane is hit, confusion reigns, plummeting soldiers, some aflame, trying to avoid crashing into each other as they descend onto a French beach. The mimics, fast moving tentacled creatures with roaring, gaping mouths, come out of nowhere, from beneath the sand. Cage and Vrataski gradually make their way off the battlefield in an attempt to find and destroy the alien being who controls them all, but once Cage's timeline surpasses the one Vrataski experienced, he realizes he must go it alone in order to save her. It doesn't take Cruise long to get back into his action hero skin, although he only gains proficiency through lots of trial and error, often eliciting (intended) laughs. The Defense's training center where Cage finds Vrataski is outfitted with spinning mechanical recreations of alien beings, where his early sessions approximate him as the ball in a pinball machine. A well toned Blunt is clearly his superior while her disinclination to share personal history is at odds with his fast talking marketing background. She's also quick to 'reset' by pulling the trigger, a Cage rattling tactic. But a common goal against incredible odds, repeated personal sacrifice and movie star looks lead to inevitable feelings. J Squad's Skinner (Jonas Armstrong, "Walking with the Enemy"), Kimmel (Tony Way, "Sightseers"), Griff (Kick Gurry, "Speed Racer"), Ford (Franz Drameh, "Attack the Block"), Kuntz (Dragomir Mrsic, "Easy Money") and Nance (Charlotte Riley, "Easy Virtue") are mostly around to provide color and dead meat, at least until the film's overblown, disappointing climax pulls them all back in. The film wraps with a joke delivered with an abrupt cut. The 3D conversion, de rigueur in any film that features flight these days, adds little.