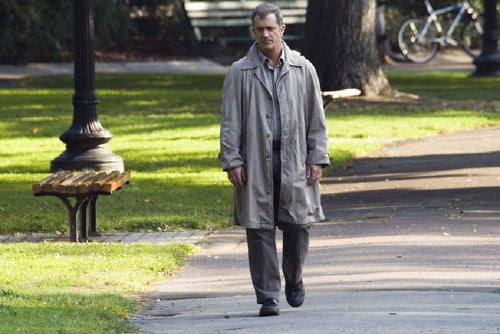 When Boston Police Detective Tommy Craven (Mel Gibson) meets his daughter Emma's (Bojana Novakovic, "Seven Pounds," "Drag Me to Hell") train from Northhampton, he has no idea that his delight in seeing her will turn into an investigation of her murder that very night that will bring him to the "Edge of Darkness."

Director Martin Campbell ("Casino Royale") and producer Michael Wearing reteam on a feature version of the BBC miniseries which won them a BAFTA twenty-five years ago and fail to recreate the magic. Andrew Bovell ("Lantana") set out to adapt Troy Kennedy-Martin's original script with "The Departed's" William Monahan joining in to add Bostonian flavor (complete with one of his ever present Whitey Bulger references). The six-hour series has been stripped back to focus on the central throughline of a father trying to unravel the mystery of his daughter's death. But the original's central jumping off point was like a pebble thrown into the water that sets off ripples, including a father's search for self amidst revelations about his daughter, while this edition skims the surface. The whole project has a weirdly muted tone, as if it was wrapped in cotton batting. Craven greats his daughter at the train station, but she becomes ill before they even get home. At his kitchen table, a sudden nose bleed sparks panic in Emma, but as they rush out the front door to get to a hospital, a ski-masked man yells 'Craven!' and fires a blast that blows Emma back in through the front door. Tommy turns his grief inward and starts in on a case that will lead him to the CEO, Jack Bennett (Danny Huston, "30 Days of Night," "X-Men Origins: Wolverine"), of his daughter's workplace, Northmoor, a nuclear facility in the Berkshires of western Massachusetts. Bennett has the support of Republican Senator Jim Pine (Damian Young, "Everybody's Fine"), one of the many people Emma tried to contact before she undertook the illegal activity that led to her demise. Shadowing them all is Darius Jedburgh (Ray Winstone, "Sexy Beast," "The Departed," taking over from Robert DeNiro, who exited the project during production), a British agent with unknown allegiances. One of the reasons the miniseries was so compelling was that as Craven learned more about Emma's activities, everything he thought he understood is called into question. Emma's ghost, a ghost of which is present here, was also his moral compass. Another was the cast, which despite big names (Gibson) and fine actors (Winstone, Huston), is simply outclassed here. Gibson hasn't starred in a film in eight years and he seems to have shrunk away in the interim. With a deeply lined face and balding pate, Gibson almost seems wizened. And let's face, introspection isn't Gibson's strong suit. Instead he seems oddly removed from the death which is supposed to be galvanizing him. Boston accents are notoriously difficult to get right and Gibson's isn't awful but it's more generic blue collar than Roslindale. Winstone is cooly charming and somewhat sinister, but no match for the electric Joe Don Baker of the series, just as David Aaron Baker ("Melinda and Melinda," "The Hoax") and Denis O'Hare ("Stephanie Daley," "Duplicity") as Millroy and Moore come up short against the subtle comic relief of Ian McNeice and Charles Kay's Harcourt and Pendleton. This group is just anemic. As Emma's 'friend with information,' Caterina Scorsone is the opposite - too twitchy and hysterical - and her fate is an audience shock tactic that is illogical on more than one level. The production itself even seems a little bloodless, although there are some nice autumnal New England locations. The series' big action sequence (Episode 5) and its horrible consequences are inverted into a passive attack courtesy of South Hadley Dairy. Massachusetts residents, should, at least, get a kick out of a running gag on the state's illegalities and some gratification that the geography, for once, appears to be right. The score by Howard Shore ("Eastern Promises," "Doubt") goes with the territory. "Edge of the Darkness" the 1985 miniseries stands up just fine twenty-five years later. The feature film version will be forgotten in twenty-five days.