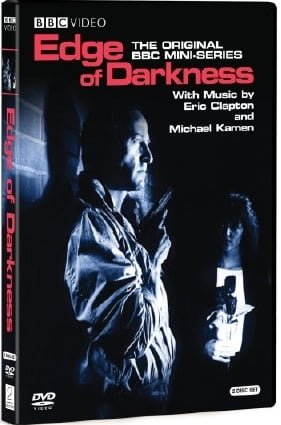 Yorkshire police inspector Ronald Craven (Bob Peck, "Jurassic Park") has just been talked out of continuing to dig into local union election tampering by his superior when he picks his political activist daughter, Emma (Joanne Whalley, "Scandal," "The Man Who Knew Too Little") up from college. But as they make their way up their stairs in the rain and the dark, a stranger steps out calling Craven's name. Emma rushes towards him, is shot and dies in her father's arms. Distraught with grief, Ronnie, who brought Emma up from childhood after his wife died of cancer, has no idea that in searching for her killer he will reach the very brink of the "Edge of Darkness." In anticipation of the 2010 theatrical remake starring Mel Gibson and adapted by the same team (producer Michael Wearing, director Martin Campbell ("Casino Royale")) who made the acclaimed 1985 BBC mini-series, Warner Brothers Home Video is releasing the original "Edge of Darkness" and it is surprising how little Troy Kennedy-Martin's ("Kelly's Heroes") story has aged in twenty-five years. In fact, it often seems prescient. And just like Ronnie Craven, "Edge of Darkness" will surprise the audience in where it goes and where it ends up given the personal grounding of its beginnings. In the U.S., the DVD should spark a whole new appreciation for Peck's costar Joe Don Baker ("Goldeneye," "The Dukes of Hazzard"), whose Darius Jedburgh is the most memorable C.I.A. agent in either film or television. In fact, I would not be surprised to learn that Philip Seymour Hoffman's Gust Avrakotos in "Charlie Wilson's War" was indebted to Jedburgh. The mini-series, which went on to win six BAFTA awards (and was nominated for five more!), including Best Series and Actor (Peck), aired in six episodes, and although Whalley is killed in the first, she appears in four of the additional five, haunting her father in word and sight as both her younger and older selves. It's one of the series' best innovations and, as we learn from supplementary material on the two-disk package, it was a device director Campbell came up with. In the first episode, Craven is shocked to learn that his daughter led a group of GAIA scientists into a a nuclear reactor site and that she kept a pistol in a box in the bedroom (Craven's kiss applied to the dildo he finds in the same box is a bit of weirdness that Peck makes work). Given leave to deal with his grief, Craven travels to London to start the journey which, in trying to find his daughter's killer, will lead him into the dark heart of the global nuclear industry with his daughter as moral compass. On his very first day, he is approached by Pendleton (Charles Kay, Branaugh's "Henry V"), a mysterious, fast-driving agent claiming to report directly to the PM's office and the two use each other for their own ends. Jedburgh, a wittily profane, Bible quoting Southerner with an enormous capacity for booze, enters the picture as a friend of Pendleton's partner Harcourt (Ian McNeice, "Valkyrie"), 'Frick and Frack' as Jedburgh calls them, and the big friendly guy's allegiances are as clear as smoke. By the last episode, one of these men will slink back into the framework from which he emerged while the other two face their own apocalypses. Technically, the series was ahead of its time, from its urgent camera work and sometimes shocking juxtapositions. Campbell uses the closeups known from television, but gets something extra out of his actors's eyes, and his landscapes, from Yorkshire to London to the underground mines which lead to an illegal uranium production facility which backgrounds the whole of the 'action' Episode 5 (the only one, ironically almost, not to feature Emma) to Scotland's grandest hotel and a small guesthouse, are as far-ranging in character as Kennedy-Martin's plot. The heavily hyped BAFTA-winning score by Eric Clapton, with Michael Kamen ("Open Range"), gets a little repetitious and is, perhaps, the only element of the series grounded in its time. The acting across the board is top rate. Bob Peck, a Shakespearean stage actor with little film experience, was chosen partially for his Yorkshire background and delivered on many more levels than that. It's a quiet, brooding, interior performance completely at odds with, but very well complimented by, Joe Don Baker's far flashier turn. Kay and McNeice are delightfully teamed comic relief without tipping into parody. The late Jack Watson does well by James Godbolt, a character initially identified as corrupt who, as so much in this series, turns out to be not at all what he first appeared. As Clemmy, a 'friend' of Jedburgh who becomes Craven's lover, Zoë Wanamaker ("Harry Potter and the Sorcerer's Stone") is memorably sexy and, in one scene with Peck, Tim McInnerny ("Casanova") does a great job of being offputting as Emma's politically ardent but unromantic lover, then turning the exchange on its head in one capping moment.