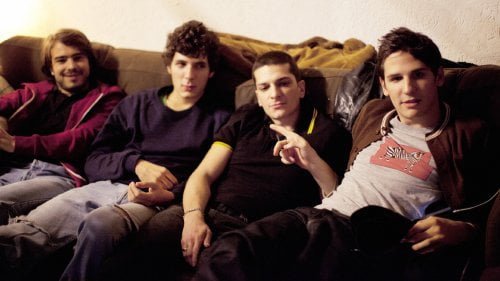 Paris 1992. Paul Vallee (Felix de Givry) has a dream. He wants to be the top DJ in the Parisian club scene and forms Cheers with his friend Stan (Hugo Conzelmann). We follow Paul’s life of booze, drugs and House music through the following decades in “Eden.”

In November, 1992, Paul Vallée (Félix de Givry) enters a Paris club where a rave is dying down. By the end of the decade, he and his friend Stan (Hugo Conzelmann) will be the DJs behind Cheers, riding so high they're booked into MoMA's PS1. But try as he might, Paul cannot quite seem to grab the brass ring, always on the outskirts of "Eden." Cowriter (with brother Sven, whose life inspired the film)/director Mia Hansen-Løve ("Father of My Children") has made something of a companion piece to her partner Olivier Assayas's "Something in the Air," a fictional retelling of his own youth during the civil unrest and revolution following the May '68 uprising. Hansen-Løve's epic follows the birth and death of a music scene throughout the '90's into the following decade through the personal perspective of her brother as friends and romantic relationships form and unravel, success alighting on some while evading others. While both films plunge us into events with large casts of characters, it's a bit more difficult to figure out just who's who in Hansen-Løve's film (unless you happen to know the given names of Daft Punk, friends of Sven/Paul whose rise is charted here). The film is a wall of party and sound that washes us along with it as Paul jumps from one girlfriend to the next, one rave to the next, one pile of coke to the next. By its last act, he's sponging off his mom (Arsinée Khanjian) to stay afloat, revisiting girlfriends (Greta Gerwig, Pauline Etienne) who've started family lives as he finds himself right back where he'd started, hosting parties for the rich with Yasmin (Golshifteh Farahani, "About Elly"). The music starts on turntables, Minnie Ripperton's 'Lovin' You' sampled, before giving way to Daft Punk and DJing on Macbooks, the death of Paul's Garage House illustrated by one last desultory New Year's Eve on a rented, empty barge, Salsa attracting crowds next door. If some friends' ascent is stratospheric, others, like Cyril (Roman Kolinka), are lost along the way, his magnum opus, a graphic biography of Larry Levine, published posthumously. "Eden" is an ambitious effort, the chronicling of an era through a musical niche, but its scope and structure plunge story and character elements deep in the mix. Grade: