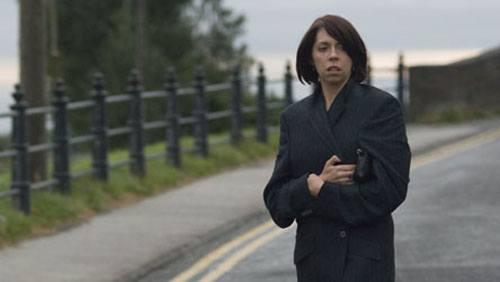 Married couple Billy (Aidan Kelly) and Breda (Eileen Walsh) Farrell have two children and live a quiet, routine life in a Dublin suburb. But, with their ten anniversary fast approaching, their lives have become dull and Billy's eye is beginning to wander to the comely, and much younger, Imelda (Sarah Greene). With the milestone event, though, it looks like there is trouble brewing in "Eden."

Breda Farrell (Eileen Walsh, "The Magdalene Sisters") is a housewife with two kids and a husband, Billy (Aidan Kelly), who goes out every night with the boys. She's made an effort to diet back to her wedding weight, but confides to best friend Eilish (Lesley Conroy) that she cannot remember how long it has been since she and Billy have been intimate. With their tenth anniversary a week away, Breda begins to dream that a night out will rejuvenate the marriage, but Billy's become obsessed with Amanda (Leonna Duff), the outgoing daughter of one of his mates, in "Eden." "Eden" was adapted from his own stage play by Eugene O'Brien and director Declan Recks does a good job getting inside the head of Breda and, to a lesser extent, Billy, building up to the climatic date, but once the anniversary rolls around, what has been an intimate character study defined by the small Irish town where it takes place becomes overtly melodramatic. There is a case to be made for trauma kick-starting a relationship, but, as depicted here, this couple would need to leave town to start over. Billy's a telephone line repairman who drives about the countryside all day and hits McKeon's at night. There he listens to the likes of Tony Tyrell (Enda Oates), an older pal with constant tales of female conquest. When Billy gets pulled by a buddy to a table with two young women, he has the chance to relive his glory day of saving a child from drowning in the river that runs through town. He fancies Amanda and her reception to his former heroism along with the ease with which Tony seems to draw younger women becomes a fixed probability in his head. Meanwhile Breda is congratulated at her diet group by Yvonne Egan (Kate O'Toole, "The Dead," "Agnes Browne"), but the older women, whom Breda once confided in, publicly humiliates her by suggesting she'll need more than weight loss to get her husband back into her bed. Breda goes off and gets tipsy with Eilish and tells her about a fantasy where two men in a boat shine a light on twenty women lining the bank, and that she, wearing a purple dress, is the one who is picked. After noting the fashions in a shop window, Breda begins to sew that special dress for her night out with Billy. She also turns in her easily gathered back ponytail for the stylish bob we can see her wearing in her wedding photo. Daughter Edel (Carolyn Murray) draws dad's attention to it that night and he is all compliments. As he is the night of their anniversary when he sees Breda in her new, slinky dress. She engages him in a dance, but he pulls away, promising to complete it when he meets up with her later that evening. Breda suggests that tonight they will be successful with the lovemaking that failed the previous weekend. Breda spends hours with Eilish getting tons of attention from the locals on her new look and Billy does indeed arrive to meet her, but when he tells her he's just off for a few minutes chat with the boys before departing, the lure of a party at the Egans, where Amanda will be present, proves too strong. Recks does a fabulous job of integrating his audience into the small Irish town where his story takes place and cinematographer Owen McPolin gives the film a sharp, polished look belying the film's indie status. Eileen Walsh, who won Best Actress at the Tribeca Film Festival for this role, is the epitome of unfulfilled yearning, the unassuming, supportive wife. Yet we never really know where Kelly is coming from other than middle-aged fantasy-land - the character and the actor who plays him are so one note with his obsession, that despite the truth behind compliments given Breda, we never really know how he feels about her. Taken for granted? Resented? Overlooked? As written, Breda's fantasy comes back to haunt immediately after its telling and again in the aftermath of Billy's betrayal, but the story should tie in with the drowning Billy prevented years before and it doesn't. The cross cutting between Billy's outlandish, drunken behavior and Breda's more understandable reaction builds to a lurid pitch and the final scene between the married couple is unsatisfying. Recks has a talent for getting the feel of an entire community and its topography on screen and has elicited a fine performance from Walsh, but the story of a marriage in crisis goes off the rails in its final act.