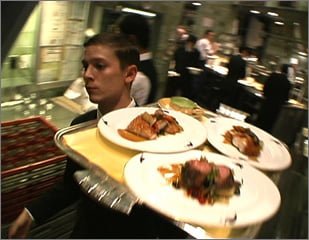 Statistics show that there are some 18,000 restaurants in New York City. 1000 new eateries open every year. Four out of five restaurants close within five years. Documentary filmmakers Andrew Rossi and Kate Novak follow the conception, labor and birth of one such establishment in "Eat This New York." Robin: Rossi and Novak mix the trials and tribulations of two friends from Minnesota, Billy Phelps and John McCormick, as they descend upon the Big Apple with plans to become the new Alain Ducasse of the city. They pool their resources and locate a kitschy little building on Division Street in Brooklyn that sits right on the border between the Satmar Jewish community of Williamsburg and the Latino neighborhood on the South Side. It's July of 2001 and their master plan is to have the restaurant, dubbed Moto, ready for business in three months. But, New York is one heck of a lot more expensive than Minneapolis and money troubles, among others, become major concerns. This story of trying to fulfill the American dream is interspersed with many talking head interviews from the cream of New York's restaurateur crop, such as Drew Nieporent (Montrachet, Tribeca Grill, Nobu), Sirio Maccioni (Le Cirque 2000) and Jean-Georges Vongerichten (Jean-Georges, Jo Jo). This is where "Eat This New York" is most interesting as the restaurateurs talk about their divergent philosophies about running a first-class restaurant - some insist that they be in residence at their establishments while others take on an entrepreneurial style by managing their franchises. Unfortunately, there is not a great deal of actual cooking and preparation of the mouthwatering dishes that get far too little attention. "Eat This New York" is an uneven effort with the main story - the woes of trying to open a restaurant in NYC from start to finish - is not all that interesting. The partners epitomize the kind of people who enter into the restaurant business without an in depth understanding the trade and all of its pitfalls. You feel bad for the budding businessmen as they struggle over funding, construction problems, licensing and inspections. The opening of Moto turns out to be an anticlimax as the energies of the founders are spent and there is nothing left of their earlier enthusiasm. There is the making of a good documentary idea within "Eat This New York" but the documakers haven't quite found it. I give it a C..

Each year 1,000 restaurants open in New York, but only 200 of them are still in business one year later. Minneapolis natives and best friends John McCormick and Billy Phelps are undeterred by the statistics, but soon get in way over their heads as they attempt to convert an old Brooklyn cash checking shop into a retro cafe in "Eat This New York." Directors Kate Novack and Andrew Rossi (also the film's cinematographer) build to the climatic opening of Café Moto in a Brooklyn location where Jewish and two Latino neighborhoods merge by intercutting commentary from and the histories of some of New York's most successful restaurateurs. While it is fascinating to listen to the likes of Drew Nieporent, creator of Nobu and the Tribeca Grill, and Le Cirque's Sirio Maccioni, those giants of Manhattan's gourmet scene overwhelm the little guys envisioning a 1920's style cafe in an outer, albeit increasingly trendy, borough. For all its nuggets of New York restaurant lore, "Eat This New York's" main course lacks flavor. Ruth Reichl, editor in chief of New York-based Gourmet magazine, is consulted to define what makes New York the restaurant capital of the world and she provides a thoughtful answer - that the city's hectic pace makes it eat out town. As various food trends are discussed by the celebrity chefs and restaurant owners who engineered them, the filmmakers cut back to the gutted former check-cashing shop being transformed into an eating establishment. The long delays quickly strain their seed money, and McCormick and Phelps have a major falling out when the one with the capital attempts to wrestle control from the partnership when he's faced with guaranteeing a loan. Yet aside from this drama, the only feel we're given for the opening of a restaurant is the coping with building contractors (a sign painter is particularly entertaining) and curiosity of residents (a potential regular confesses that he thought the activity was a sting operation). We're told that the chef to be hired must also come in as an investor, but never allowed a look at the designing of the menu or the more stylistic touches that establish a restaurant's ambience. Café Moto literally arises from dust and ashes intact. "Eat This New York" is an overspiced stew of stringy meat.

Based on Elizabeth Gilbert’s memoire, director and co-writer (with Jennifer Salt) Ryan Murphy brings us a flat travelogue that centers, literally, on Julia Robert. Liz is bright and buoyant and always has a ready smile (of course). The first leg of her world tour lands her in Rome, the Eternal City. There she meets a variety of kind and beautiful people and they all feast on the bountiful and delicious food so prevalent. (After viewing “Eat Pray Love,” I immediately ordered a large Regina’s pizza.) The city is beautifully photographed by Robert Richardson, making copious use of panoramic views shot during the magic hour. The characters around Liz are two-dimensional and are there to root for her and not much more. After her months in Italy, Liz arrives in mystical India where she hopes to find her inner spirit at an ashram. There, she meets Richard from Texas (Richard Jenkins), a man also looking for inner peace. They form a warm friendship and help each other find what they are looking for. That’s about it for India, except for a young woman, Nyomo (I. Gusti Ayu Puspawati). She wants to study to be a psychiatrist but is about to be wed in an arranged marriage. You think that Liz is going to offer sage advice so Nyomo can decide her life for herself. This does not happen. Instead, we get an elaborate Indian wedding. I wanted Liz to go back to Italy, but that would make too much sense. Instead, she sets off to Bali to find the old fortune teller, Ketut (Hadi Subiyanto), she visited a year before (this is established in the film’s prologue). She seeks his guidance but, as the last word of the title says, she is really there to find Love. Bring in Felipe (Javier Bardem), a soulful man with sad eyes who lives in Bali. From his first appearance on screen, you know that he is the man for her, someone who can nurture her inner spirit. The filmmakers spend an hour before reaching the logical, happily ever after conclusion. We do get to see Indonesia. “Eat Pray Love” is a chick flick. At the screening, there was about a 10 to 1 ratio of women to men. As the film ended and I walked out, all I could see was a sea of femme faces staring raptly at the film’s closing moments. The theater was packed and makes me believe that this is going to be a big hit with its target audience. The cast, led (by the nose) by Roberts, is pretty. The men are handsome and sensitive. The scenery is beautiful and the techs and production are first class. I still wish that Liz went back to Italy and had another pizza.