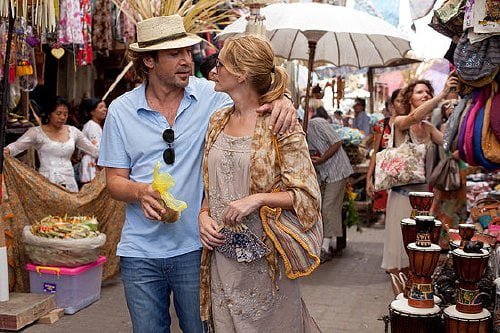 Liz Gilbert (Julia Roberts) seems happily married to her husband, Stephen (Billy Crudup), but there are chinks in their marital bliss. They have grown far apart and Liz now wants a divorce. She decides to fulfill her life’s dream to travel and plans a year long tour of Italy, India and Bali to “Eat Pray Love.”

Writer Liz Gilbert (Julia Roberts) comes to the realization that she no longer wants to be married to her husband Stephen (Billy Crudup, "Stage Beauty," "Watchmen") and her rebound affair with younger NYC actor David Piccolo (James Franco, "Pineapple Express," "Milk") just seems to add to her mid-thirties funk so she decides to embark on a year long trip to Italy, India and Bali to "Eat Pray Love." Cowriter (with "Nip/Tuck" colleague Jennifer Salt)/director Ryan Murphy (TV's "Glee") brings Elizabeth Gilbert's best-selling self-realization memoir to the big screen as a glossy, Julia Roberts starring travelogue that gives more insight into where to get a great pizza than the benefits of striving for enlightenment. While Gilbert's novel received its own share of criticism, at least the author shared her thought processes as she worked her issues out. The film features (a slightly too old) Roberts with that huge smile beatifically magnetizing those around her everywhere she goes within a golden glow. The adaptation also gives us the Cliff Notes version of character motivation. Stephen expresses an impulsive idea that he'd like to go back to college - Crudup does a lot with a little here - and Liz begins to fret. She's already been told that having a child is like 'getting a tattoo on your face' by publisher friend Delia (Viola Davis, "Doubt"). An awkward prayer later and Liz is on the road to divorce. She locks eyes with David at a performance of her play, 'Permeable Membrane,' and is soon cohabitating again (it's never clear in whose apartment - looks way too nice for a frequently unemployed actor, yet it includes a shrine to his Guru) and unhappy again. A chance Italian phrase, David's guru and a former trip to Bali and medicine man Ketut Liyer (Hadi Subiyanto) become instant itinerary. Rome means fast friendship with a fellow traveler and learner of Italian Sofi (Swedish actress Tuva Novotny) from Sweden, met in an expresso crush (their faux pas of ordering cappuccino for breakfast is overlooked). Giovanni (Luca Argentero) is the mutual tutor who introduces the amusingly named Luca Spaghetti (Giuseppe Gandini) and fellow soccer fans Maria (Elena Arvigo) and Giulio (Andrea Di Stefano, "Nine") just appear during a dinner one day, the sport itself left by the wayside (it's not edible, therefore it's dispensable). I was left with three impressions after this segment - 1) the only line of dialogue of note is Liz's translation of 'I am alone,' given without a lot of context; 2) after the brief Liz and Sofi Naples excursion to Da Michele pizzeria, the place will probably be forever besieged; and 3) was the lens coated to make Roberts look younger in the Thanksgiving scene? India makes for more quick connections, although the most notable, 'Richard from Texas' (Richard Jenkins, "The Visitor," "Dear John"), takes more of Liz's getting used to. Of course his will turn out to be a more valuable friendship, his back story a chance for Jenkins to emote and Roberts to radiate some more. Her wedding 'gift' to young Tulsi (Rushita Singh), commemorations of her 'Geeta,' played more humbly on the page than Roberts is capable of - it's as if she can will happiness into existence, not the impression Gilbert gives. If the India ashram segment leaves out most of the spiritualism, the Bali segment is bereft of all the cultural awkwardness that made it more interesting. Barely hinted at is the uneasy relationship between Liz and Ketut's wife Nyomo (I. Gusti Ayu Puspawati). Far worse is loss of the extreme life lesson Liz learns when she attempts an act of charity towards healer Wayan (Christine Hakim). At least we have Javier Bardem ("Vicky Cristina Barcelona") giving the film's best performance as Brazilian importer/exporter Felipe, ready to risk love again after years spent grieving over his divorce. Ryan Murphy proves he has the technical skills to make the move from the small screen, as "Eat Pray Love" is certainly a beautiful production. But as far as depth goes it's as if Nancy Meyers decided to make a light drama. It's certainly far from the creep show that "SATC 2" was when it hit the road for foreign locales, but Roberts and Ryan do not do Gilbert justice. Still, "Eat Pray Love" is a lot more palatable than most films made for the female audience in 2010.

Based on Elizabeth Gilbert’s memoire, director and co-writer (with Jennifer Salt) Ryan Murphy brings us a flat travelogue that centers, literally, on Julia Robert. Liz is bright and buoyant and always has a ready smile (of course). The first leg of her world tour lands her in Rome, the Eternal City. There she meets a variety of kind and beautiful people and they all feast on the bountiful and delicious food so prevalent. (After viewing “Eat Pray Love,” I immediately ordered a large Regina’s pizza.) The city is beautifully photographed by Robert Richardson, making copious use of panoramic views shot during the magic hour. The characters around Liz are two-dimensional and are there to root for her and not much more. After her months in Italy, Liz arrives in mystical India where she hopes to find her inner spirit at an ashram. There, she meets Richard from Texas (Richard Jenkins), a man also looking for inner peace. They form a warm friendship and help each other find what they are looking for. That’s about it for India, except for a young woman, Nyomo (I. Gusti Ayu Puspawati). She wants to study to be a psychiatrist but is about to be wed in an arranged marriage. You think that Liz is going to offer sage advice so Nyomo can decide her life for herself. This does not happen. Instead, we get an elaborate Indian wedding. I wanted Liz to go back to Italy, but that would make too much sense. Instead, she sets off to Bali to find the old fortune teller, Ketut (Hadi Subiyanto), she visited a year before (this is established in the film’s prologue). She seeks his guidance but, as the last word of the title says, she is really there to find Love. Bring in Felipe (Javier Bardem), a soulful man with sad eyes who lives in Bali. From his first appearance on screen, you know that he is the man for her, someone who can nurture her inner spirit. The filmmakers spend an hour before reaching the logical, happily ever after conclusion. We do get to see Indonesia. “Eat Pray Love” is a chick flick. At the screening, there was about a 10 to 1 ratio of women to men. As the film ended and I walked out, all I could see was a sea of femme faces staring raptly at the film’s closing moments. The theater was packed and makes me believe that this is going to be a big hit with its target audience. The cast, led (by the nose) by Roberts, is pretty. The men are handsome and sensitive. The scenery is beautiful and the techs and production are first class. I still wish that Liz went back to Italy and had another pizza.