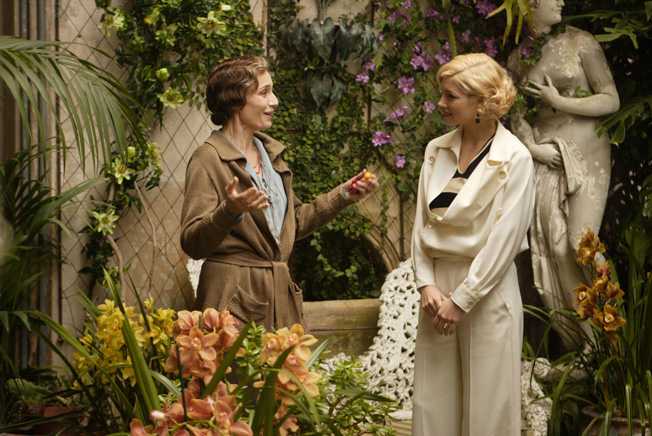 The Whittaker family prodigal son, John (Ben Barnes), returns home to England from abroad with a surprise on his arm: a beautiful, vivacious blond American wife, Larita (Jessica Biel). His mother (Kristin Scott Thomas) immediately disdains her new daughter-in-law and does her best to undermine the young woman and her marriage. Mrs. Whittaker’s dislike for Larita spurs on a battle of wills that will cause the Whittakers to expose her “Easy Virtue.”

This is an unexpected turn for Aussie writer-director Stephan Elliott who first came to international attention with his wonderfully quirky “The Adventures of Priscilla, Queen of the Desert.” This time around, the helmer freely adapts, with coscribe Sheridan Jobbins, the 1928 Noel Coward play and brings the events of the day to the mid 30’s, fillowing the onset of the Great Depression. Larita is a celebrity femme who was the first woman to (unofficially) win a Grand Prix car race. She is tall, elegant, self-assured and married to John, something her mother-in-law hates with reserved passion. Any effort Larita makes to appease Mrs. Whittaker and her sullen daughters Hilda (Kimberly Nixon) and Marion (Katherine Parkinson) is met with stone-faced condescension. Since John, a true mother’s boy, will not stand up for his new wife, Larita feels isolated and alone. However, she has two unlikely allies in the Whittaker household: Mr. Whittaker (Colin Firth), a kind and thoughtful man, and family butler, Furber (Kris Marshall). Each, in own way, do their best to undercut the resentment held by the Whittaker women for Larita. Jessica Biel is terrific as the saucy, assured Larita. The actress conveys the dignity that allows Larita to turn the other cheek when she is, metaphorically, slapped down by her husband’s mother. Kristin Scott Thomas does a wonderful job as the woman you love to hate. Her single-minded campaign against Larita is unrelenting, even when offered financial help for the formerly well to do, now near bankrupt, family, The offer, from an American no less, only solidifies the resentment. Colin Firth gives an understated, effective performance as the Whittaker patriarch, a man whose mind and heart were irrevocably changed by his terrible experiences during and after the Great War. He is husband and father in name only but there is a determined empathy for his daughter-in-law. Kris Marshall gives a great performance as the family retainer who can barely cover his scorn for the hypocrisy of his employer (Mrs., not Mr., Whittaker). It is a subtle comedic performance reminiscent of the old screwball comedies. Other supporting cast members are little more than background characters. Behind the camera crew do a splendid job in creating a believable world of 1930s upper class Britain that has fallen on the same economic hard times felt by the rest of the world. Production design (John Beard) and art direction (Mark Scruton) capture the period look and feel expertly. Jessica Biel’s costuming, by Charlotte Walter, is stylish, elegant and notable. The sum of the parts, Biel + gorgeous duds, is greater than the whole. Lenser Martin Kenzie does a top-notch job in his use of light and texture to give the look of the time just prior to the start of World War 2. The combination of deft direction, good acting, intelligent script and excellent look make “Easy Virtue” a good bet for mature audiences.