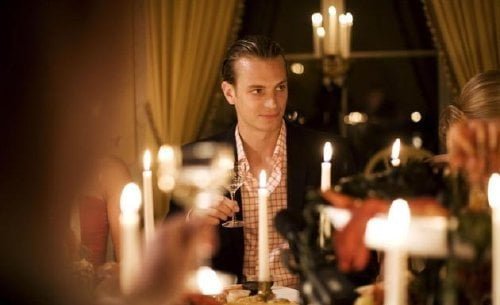 JW (Joel Kinnaman) leads a double life. He is in love with a wealthy socialite but his meager circumstance as a struggling student force him to seek cash elsewhere. He takes a job as a drug runner but, as he moves up in the drug biz, things get dicey when the Serbian mafia rears its ugly head as JW goes for the “Easy Money”

Daniel Espinosa is a solid action director who can also juggle multiple story lines with ease, but this film kept me at arm's length. Felt little empathy for JW, mostly because his 'romance' with Sophie was only skin deep yet was supposed to be the driving factor in his downward spiral. As secondary character Jorge, Matias Varela makes a bigger mark.

Based on the crime novel by Swedish author Jens Lapidus, director Daniel Espinosa (who would later direct “Safe House,” “Easy Money” was made in 2010 and has sat in distribution purgatory since. It gets it American release on the draw, I think, of Joel Kinnaman, who created a very different character from JW in the AMC TV series, “The Killing.” The story has many players from various places around the globe and they converge on Sweden from such diverse places as South America, Serbia, Albania and the Arab Middle East – and, of course, Sweden. The core of the film revolves around big drug deals and bringing the illegal narcotics into the lucrative Swedish market. JW is a smart business school student who will do what he has to make money, from driving a cab to selling term papers to his fellow students. The drug biz may be JW’s ticket to his dreams. JW has always lived beyond his means, buddying up to upper class friends like Carl (Christian Hillborg), to get invited to classy parties and rub elbows with the rich and powerful, something that JW really wants to be. At one such party, he meets Sophie (Lisa Henni) the socialite daughter of one of the wealthiest and JW falls for her but keeping her in ways she is accustomed poses a problem. Enter Jorge (Matias Varela) an escapee from a jail who is trying to get into the drug dealing biz. JW saves Jorge from being beaten to death by the Serbian henchman, Mrado (Dragomir Mrsic), of ruthless drug kingpin Radovan (Delan Cukic). The two go into business together and become part of the illicit drug trade, but perils, such as Radovan, will loom menacing on the horizon. This is a complex story with a lot of principal characters. The tale is divided into subplots involving JW, Sophie, Jorge, Mrado and Radovan and others and this is used to build the characters as they journey to their expected violent conclusion. It is an interesting film but somewhat sterile. There is little emotion from the characters (except Latin blooded Jorge) and their upcoming deadly collision is inevitable.