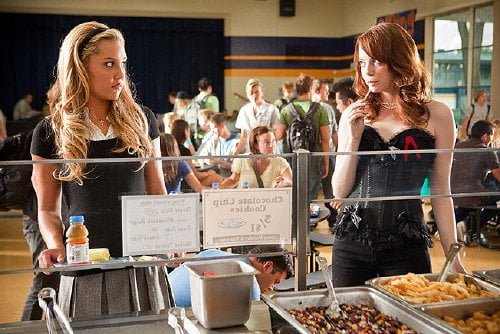 While studying "The Scarlet Letter," super straight student Olive (Emma Stone, "Zombieland") lets some false information about the state of her virginity loose into the halls of high school. When her life begins to resemble Hester Prynne's, Olive takes the reins and uses her new notoriety to propel her popularity in "Easy A."

About ten to fifteen years ago, there was a spurt of teen films based on classics from Jane Austen's "Emma" in "Clueless" to Shakespeare in "10 Things I Hate About You" and "O." "Easy A" updates the convention with referential homage to the films of John Hughes and John Cusack's iconic "Say Anything" boom box scene, both of which are merged in the film's climax. Add to that a spirited performance from the likable Stone and a terrific supporting cast of adults and you've got the best female centric teen comedy since "Mean Girls." When Olive tells a little white lie to her best friend Rhiannon (Aly Michalka) to avoid a weekend camping trip with her friends' weird parents, Rhi pushes for details come Monday and Olive decides to elaborate. Rhi will be satisfied with nothing less than her friend's loss of virginity (Olive actually spent the weekend in her room riffing off a greeting card that plays 'Pocketful of Sunshine,' a hilariously staged and edited montage). Soon the whole school knows and Olive likes the attention it gets her. Then her gay friend Brandon (Dan Byrd, TV's "Cougar Town") begs to use her reputation to preserve his own. Olive takes pity and the twosome have loud mock sex at a high school keg party. Brandon spills the beans on Olive's favor to fat boy Evan. Soon Olive's good intentions helping folks by lying about her own sexual activity turn rancid and she's branded a dirty skank. But the first scared boy she ever protected back during an adolescent game of spin the bottle sees beyond the high school rumor mill. Stone's a natural, a real talent. She can sing, she can pratfall, she can be cute, she can be sexy. She can toss off zingers with the best of them and she's up against some formidable talent, beginning with Patricia Clarkson ("Cairo Time") and Stanley Tucci ("Julie & Julia") as her hilariously irreverent, witty and liberal parents. Screenwriter Bert V. Royal has come up with some great family conversation and director Will Gluck ("Fired Up!") has provided the environment for his actors to excel. Also fun is Thomas Haden Church ("Sideways") as Olive's favorite teacher, Mr. Griffith and Lisa Kudrow (TV's "Friends") as his unfaithful wife, the school's guidance counselor. Malcolm McDowell ("A Clockwork Orange," "The Book of Eli") is the school's offbeat principal. Penn Badgley (TV's "Gossip Girl") is distractingly reminiscent of "Back to School's" Keith Gordon and not really believable as the true blue Todd. SNL's Fred Armisen has a one joke cameo as the Pastor Olive seeks out for advice, but he milks that joke for all it's worth. If there is a disappointment overall in "Easy A" it is with the character of Amanda Bynes's ("Hairspray," "Sydney White") Marianne who seems to have stepped out of 2004's "Saved!." Granted, "The Scarlet Letter" requires righteous moral indignation, but the "Easy A" version is so otherwise inventive, Marianne seems like a copout and Bynes gives the role little humor. (It's also odd that Olive gets sent to the principal's office for using language, but the Marianne follower who provoked her by calling her a slut in class is not.) Besides updating classic literature by way of classic teen comedies, the filmmakers also modernize using gift cards in lieu of cash and texting as the new school note. Like her boyfriend's little sister in "The Rocker," Stone uses youtube to get out a big message. The actress has been steadily building a body of work. With "Easy A," she proves she can headline a film and take the territory once owned by Lohan.