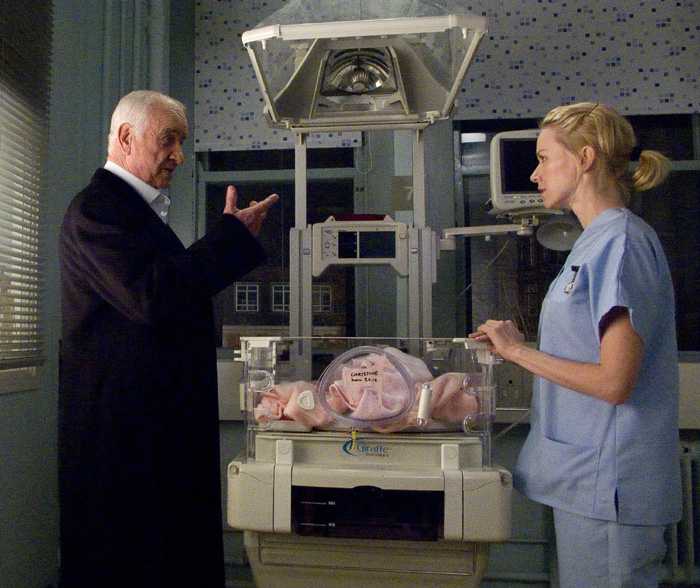 A pregnant young woman enters a London pharmacy and, in heavily accented English, pleads for help before hemorrhaging and passing out. She is rushed to the hospital; too late to save her, but midwife Anna Khitrova (Naomi Watts) delivers the baby, alive. Armed with only the girl’s diary, Anna sets out to find her family, not knowing that the young woman was a victim of a Russian Mafia prostitution ring. She will soon find herself face to face with one of the City’s most vicious and brutal crime families in “Eastern Promises.”

Since the girl, Tatiana’s (Sarah-Jeanne Labrosse), diary is written in Russian, Anna seeks the help of her Uncle Stepan (Jerzy Skolimowski). His translation uncovers some disturbing information about a Russian sex-trafficking ring and not wanting to involve her uncle in such sordid matters, she takes the journal to the kindly patriarchal owner of the Trans-Siberian restaurant. Semyon (Armin Mueller-Stahl) readily agrees to help translate but Anna senses something is amiss when she meets the man’s son, the violent and arrogant Kirill (Vincent Cassel), and, even more disturbing, the family’s driver, Nikolai (Viggo Mortensen). What Anna does not know yet is that Semyon and his family are members of the notorious Vory V Zakone Russian criminal brotherhood and that the diary is full of incriminating evidence against him and, particularly, Kirill. Nikolai, who is not what he seems to be, is torn between his loyalty to the family and his compassion for Anna and her quest. This division of mind put lives at stake, including his own, and Nikolai must perform a balancing act to survive and to help Anna find the baby’s family. This is the latest work by David Cronenberg, who received (overrated) praise for his “A History of Violence,” and it is a tepid crime drama that divides itself in two. The first story, about Anna and the diary and her search to find Tatiana’s identity and family, is straightforward as she relentlessly digs into London’s criminal underbelly for answers to the questions raised by the diary. The other part of the yarn has Nikolai’s bosses trying to put a stop to any incriminating evidence that might harm the family. The script, by Steven Knight, is a mixed bag as the two stories entwine and Nikolai’s true identity is (in passing, almost as a foot note) revealed. As such, the overall tone of “Eastern Promises” falls flat. The fine cast of actors is given two-dimensional characters that are subservient to the material brimming with confused intrigue and repeated (at least one time too many) throats slashed. Naomi Watts, as every-girl Anna, does not have much to hang her hat on and is more object than subject. Viggo Mortensen does seem to have a good time chewing scenery and putting on an outrageous Eastern European accent. Vincent Cassel, as the volatile Kirill, has just one note to play and he does so over and over. Armin Mueller-Stahl is well cast as Semyon but, when Anna first meets him, you know his gentle façade is a cover for his ruthlessness. Some sympathy for Semyon, before you learn what he really is, would have given the story some needed buildup. Sinead Cusack, as Anna’s mother, and Jerzy Skolimowski, as Uncle Stepan, do come across as caring family. Eastern Promises” is a routine crime drama that tries to have Anna’s humanitarian mission give it an air of nobility. The characters are so poorly defined, though, it never rises above average.