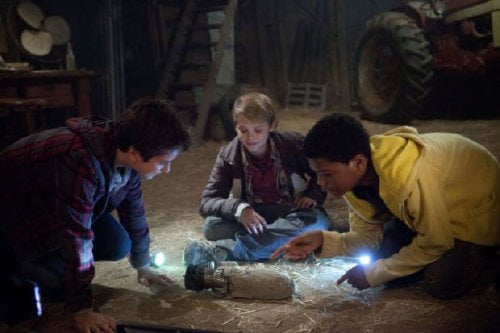 Alex (Teo Halm), Tuck (Astro) and Munch (Reese Hartwig) are best friends but, due to a freeway being built, their neighborhood is to be torn down. It is the boys’ last week together and we follow them as they discover a strange signal on their smartphones and see that it is a map of a nearby desert. The signals seem to be guiding the kids as they set out on their last great adventure together in “Earth to Echo”

With Mulberry Woods, Nevada, being obliterated for a highway construction project, outsider best buddies Tuck (Astro), Alex (Teo Halm) and Munch (Reese Hartwig) decide to spend their last night together before their families move in opposite directions. Weird scrambled patterns have been appearing on their smart phone display which the nerdy Munch has corresponded to a map of an outlying desert area. Almost twenty miles from home on their bicycles, they encounter something far bigger than they expected in "Earth to Echo." Producer Andrew Panay ("Hit and Run") wanted to make a movie like "E.T." and "The Goonies" for a new generation and he's done just that. Partnering with TV's 'Zombie Roadkill' director Dave Green and screenwriter Henry Gayden, Panay's derivative film is also indebted to the found footage trio of "Chronicle" and the mechanical owl of "Clash of the Titans." This family entertainment may seem all too familiar to parents, but even they should enjoy the performances of its engaging young stars. Tuck videos everything and so it's from his camera which we experience the boys' adventure. Alex has been through multiple foster homes and while it appears he's finally in a good place, he's the most introverted, his bare room a picture of someone who doesn't expect to stay long. Munch's room is the opposite, stuffed to the gills with all kinds of equipment like some kind of lab, and yet he's the most fearful, preferring to explore the world online. Munch takes some convincing, but his bond to his friends is strong and he's more afraid of missing something. Before they leave, he rigs up their cell phones so that anyone's mom calling another's to check on their whereabouts will come to his, he being the one most able to duplicate his mom's voice. Things get scary as the boys find themselves pedaling in the dark far from home. They may have escaped the notice of their folks, but some of the construction guys seem to be on the same course they are. Following their phones, they find an odd piece of equipment that has a life of its own. Eventually a small creature within makes itself known (why this 'alien' being looks mechanical is anyone's guess). Using the old 'one beep for yes, two for no' method of communication, they learn it's trying to get home by building a spaceship and the alien they name Echo continues to lead them to needed resources using their phones (which, oddly, their parents neglect to call after Munch humorously mishandles their first one). Echo's quest takes them to pawn shops and diners, but their most unexpected destination is to the most popular girl in school's home. The boys try to disengage Emma (Ella Wahlestedt, TV's 'Army Wives'), but she proves herself as determined as they are to help Echo. It's easy enough to suss out the freeway project and its workers for what they really are, but when the boys realize where Echo's ship lies they fear helping him will endanger the residents of their town. Mulberry Woods is a Spielbergian suburb, where all the boys homes look the same, at least from the outside. Despite the derivative design for Echo, special effects are better than one might expect. The use of the found footage device is one of the better ones - there's no excessive shaky cam to blur important action and the perspective makes sense even when allowing Tuck into the frame. The film's climax uses a joke to not-quite-explain why the boys are apparently the only ones who've witnessed it. "Earth to Echo" didn't look very promising exactly because of what it's clearly trying to be. Color me surprised, then, that in addition to the very movies it blatantly steals from, Panay's nostalgia has resulted in a family film that gets at the essence of shared childhood experience. It's not a great film, but it has heart and the boys at its core create a friendship that one senses will be lifelong.

Though derivative of other films – “ET,” “The Gonnies,” “Close Encounters of the Third Kind,” “Robot Giant” and the original “Clash of the Titans” (when you see “Earth to Echo” you will know what I mean) were ones I came up with – this is an enjoyable film that is ideal summer entertainment for teens and younger. But, much like the abovementioned films, “Echo” is also entertaining movie-going for older teens and young adults who want something light and airy, even with a sinister thread that pervades the film. The boys are joined in the quest by a pretty schoolmate, Emma (Ella Wahlestedt), who serves two purposes – she is the brains of the quartet as the adventure unfolds and also an obvious hook to attract teen girls to the theaters. And, there is nothing wrong with that. All four kids do a very good job of acting like, well, kids. Their adventure becomes our adventure. There is a great deal of heart in the story by Henry Gayden and Andrew Panay and first time feature helmer does a decent job in bringing that story to the screen.