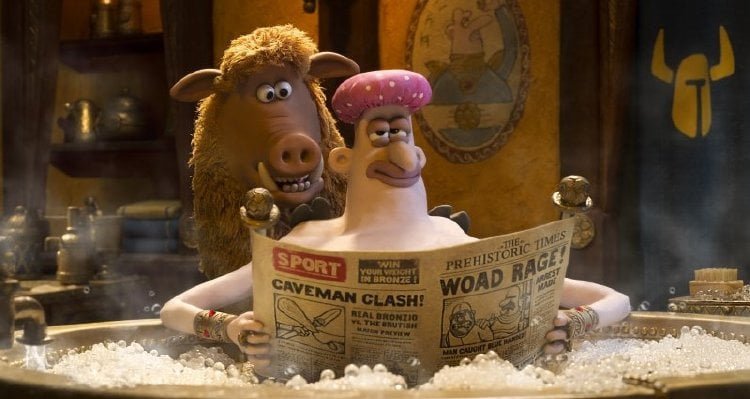 Way back in the Neo-Pleistocene Age (that’s a lot of years ago) a giant asteroid hit the Earth and ended the Age of the Dinosaurs. The Stone Age begins and the cavemen are the dominant species, foraging and hunting rabbits and being pretty happy. Their idyllic life is threatened, though, when the Bronzers arrive to destroy the land for profit in “Early Man.”

Caveman Dug (voice of Eddie Redmayne) has often wondered what his ancestors were hunting, their cave paintings depicting them kicking round objects. When his people's valley is attacked by Lord Nooth (voice of Tom Hiddleston) of Bronze Age Town, Dug is captured and ends up on a playing field where he suddenly realizes he may have an advantage as "Early Man." We haven't had an Aardman movie from Wallace and Grommit creator Nick Park since 2005's "The Curse of the Were-Rabbit." He co-directed that one but the new one, written by that film's Mark Burton along with James Higginson from Park's story, marks his solo feature directorial debut. But despite the amazing craft behind Aardman's stop motion animation (this time enhanced with CGI effects) and a starry vocal cast, "Early Man" is a bit of a disappointment, cute but slight. After a prologue that hints at the extinction of the dinosaur (Ray and Harry, named for stop motion forerunner Ray Harryhausen), we're introduced to Dug and his 'dog' (actually a wild boar) Hognob (voice of Nick Park) suggesting that instead of hunting rabbits, perhaps the Stone Agers should try and take down a mammoth. Chief Bobnar (voice of Timothy Spall) dismisses the idea right before Nooth's armored ones come crashing through their turf. When Dug comes to, he is a stranger in a strange land, gawking at the futuristic society and Goona (voice of Maisie Williams), a blonde bronze pan seller. Nooth views the backwards man as an opportunity to take in more bronze, Dug offering to play the unbeaten Real Bronzio football team to win back the Stone Age valley. Goona accompanies him back to the Badlands to coach the Stone Age oafs. Park's never met a puny pun he didn't love and "Early Man" is teaming with them. But the film's humor is ever so gentle and Park's Grommit stand-in, Dug, doesn't elicit the same rooting interest. Hiddleston, speaking with an outrageous French accent, provides most of the film's laughs, whether via sight gag (Park's Woad Wage newspaper headline) or sparring with the Message Bird (voice of Rob Brydon, who also performs sportscasters Bryan and Brian, based on real-life soccer color John Motson and Alan Hansen) sent by Queen Oofeefa (voice of Miriam Margolyes) . The film's funniest scene finds Hognob mistaken for Nooth's masseuse (and criticized for being 'ham-fisted'). Real Bronzio turns out to be a team made up of players who all believe they are stars, the better for the Stone Age to promote team work. The historical mashup works for visual and ideological contrast, the better to keep "Early Man" from turning into the UK inflected 'Flinstones' promised in opening minutes. Grade:

It has been far too long since stop-motion animation master Nick Park (“Wallace and Gromit” - need I say more?) released a feature film, the last being “The Curse of the Were-Rabbit (2005).” I, like many, have looked forward to his next effort for a long, long time, eagerly anticipating “Early Man.” I will not say I was disappointed, but I did not get the rush that Park’s earlier films, especially “W&G,” usually gave me. That said, “Early Man” is a fun romp in interpretive history – or, here, prehistory. Dug (Eddie Redmayne) is the real progressive among his Stoner tribe whose leader, Chief Bobnar (Timothy Spall), is quite content with hunting elusive rabbits and not much more. Dug, though, has grander plans and wants the tribe to hunt bigger game – wooly mammoths. But when they finally agree to go for big game, something sinister is there instead. The Bronzers, led by greedy Lord Nooth (Tom Hiddleston), arrive in the Stoners’ valley to exploit the land to fill Nooth’s coffers and banish the tribe to the hostile, volcanic badlands. Dug desperately tries to stop the pillaging hordes but is knocked out and, unknowingly, transported into the city. There, he is mistaken for a gladiator in the game of, wait for it, football! (To us Americans, and no one else in the world, it is called soccer.) Dug does not know it, but his ancestors invented the game and he has a knack for it, to. Then he meets Bronzer girl, Goona (Maisie Williams), who is a savant at football but, as a girl, she cannot play on the Bronzer team. With this ringer on board, Dug challenges the Bronzer all-star team to a game – winner takes all. I had the feeling, as I watched, “Early Man,” that I had seen it before, countless times. The story, by Mark Burton, Nick Park and James Higginson, is a familiar one with its shell plot about a boy and his dog (or, in this case, a domesticated wild boar named Hognob), a strong-willed and capable heroine, and an evil persona who wants everything for himself. The “Early Man” crew takes the well-worn formula and has fun with it. And, I did, too “Early Man” may not be the best of Aardman Animations but it is still a pleasure to watch from start to finish. It has its share of lovable characters, lots of humor and a big heart.