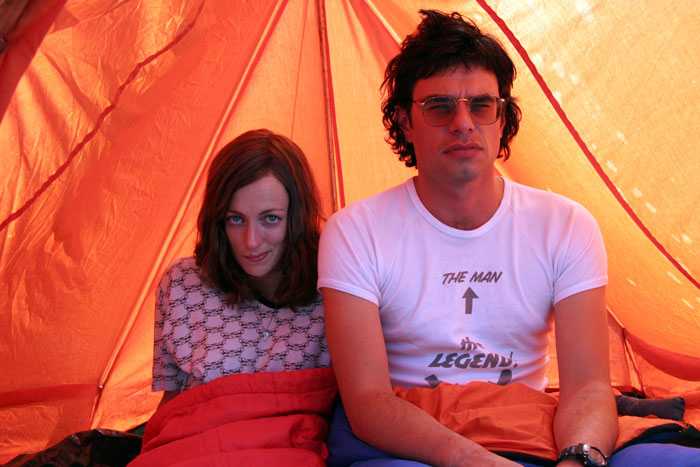 Meaty Boy cashier Lily (Loren Horsley) has a yen for nerdy gameboy salesman Jarrod (Jemaine Clement, HBO's "Flight of the Conchords" and "Little Britain's" Lou lookalike) who works across the hall in the mall, so she crashes his costume bash and ends up against him in vidgame finals as "Eagle vs. Shark."

This New Zealand offering from writer/director Taika Cohen is a perfect example of manufactured tweeness, a film desperate to be quirky and offbeat but which just doesn't get it, offering up pathetic losers for us to laugh at rather than with, mistaking cruelty for comedy. Lily is the picture of feminine self-consciousness, a shoe gazing doormat for unworthy men. Jarrod is so full of hot air he floats above the fact the he's a social pariah, a legend in his own mind. This guy is so despicable, we're meant to think its funny when he attacks a cripple. And so with Jarrod as his hero, Cohen strips his film of any rooting factor. As Jarrod's older sister and brother-in-law, Rachel House ("Whale Rider") and Craig Hall (2005's "King Kong") portray Nancy and Doug as slightly more well-adjusted losers, living with dad after their tacky track suit venture went nowhere. Morag Hills provides the "Little Miss Sunshine" factor as Jarrod's unexplained daughter Vinny. Stop motion of a couple of half eaten apples is interspersed throughout the film with only directorial indulgence a reason for existing. There are only two reason to watch "Eagle vs. Shark" and unfortunately they're both way too fleeting to make it worthwhile - glimpses of the New Zealand coastline and supporting actor Joel Tobeck ("The Lord of the Rings: The Return of the King," "Ghost Rider"), whose goofy doofus Damien delights little sister Lily with his awful Ahnuld and Austin Powers impersonations. Tobeck is the only human being in the film.