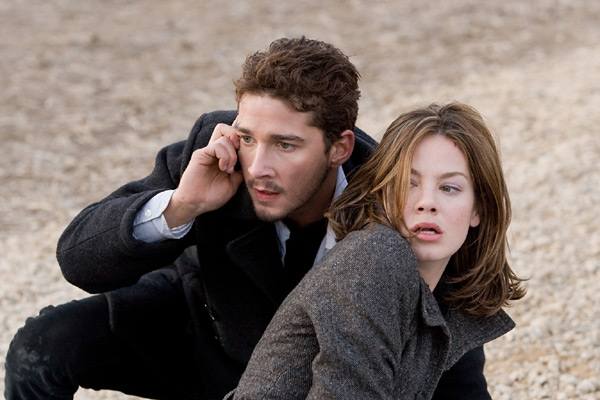 Jerry Shaw (Shia LaBeouf, "Disturbia," "Indiana Jones and the Kingdom of the Crystal Skull") is a slacker scraping by working at a Chicago Copy Cabana when he receives word of his brilliant twin brother's death. Home from the funeral, he discovers 750K in his account and an apartment full of arms and explosives. He gets a call telling him he has 15 seconds to move, that he has been 'activated.' Jerry doesn't know it yet, but he's become mixed up in project "Eagle Eye."

Director D.J. Caruso ("The Salton Sea," "Taking Lives") teamed up with LaBeouf last year for the "Rear Window" rework "Disturbia," a pretty good movie with an overblown last act. This time out, with a script attributed to four writers, the Hitchcock references (among others) are many, but the film tanks a lot earlier with illogical stunts and a ludicrous 'reveal' of just who is pulling the strings and how she's taken down. "Eagle Eye's" small pleasures are to be found in a couple of early chase scenes and a droll supporting turn from Billy Bob Thornton ("Bad Santa," "Mr. Woodcock") as the F.B.I. agent on Shaw's tail. Shaw doesn't react quickly enough and is bagged by F.B.I. Agent Thomas Morgan (Thornton), but while Morgan and Air Force Agent Zoe Perez (Rosario Dawson, "Clerks II," "Grindhouse") are arguing jurisdiction (Shaw's dead twin was Air Force Intelligence), the female phone caller redials and tells Jerry to duck - voila! - a crane smashes through the window allowing him to escape right into the path of Rachel Holloman (Michelle Monaghan, "Gone Baby Gone," "Made of Honor"), another pawn being played with a threat to derail the train her young son Sam's (Cameron Boyce, "Mirrors") band is taking to D.C. (to play for the President). With the female voice directing them as well as the traffic lights, a whole bunch of police and other vehicles are smashed up as they make a getaway, following orders to meet Ranim Khalid (Anthony Azizi, "Wristcutters: A Love Story") in a remote power station field in a scene that proves as lethal and as gruesome as the last in "Se7en" if nowhere near as believable. In trying to figure out just what's going on, initially Rachel suspects Jerry's brother Ethan was a terrorist, but the two form a bond during their hair-raising beat-the-clock adventure and drop the blame game. They're told to rob an armored car, jump on a Japanese tourist bus, bypass airport security and inject themselves with a solution to survive a depressurized airplane ride. Then, once they do figure out what's going on, things get really silly. In "Eagle Eye," haphazard editing is often mistaken for quick cut action. So many ideas from other films have been cobbled together the experience of watching it is like being in a blender. There are explosives disguised as luxury goods a la the wine cellar uranium in "Notorious," "North by Northwest's" crop duster reimagined here as the robotic Reaper defying all logic in a tunnel chase and "The Man Who Knew Too Much's" climactic orchestra scene. And that's just the Hitchcock. One will also find bits and pieces of such films as "Face/Off," "Enemy of the State" and "2001." LaBeouf and Monaghan are a likable pair and shouldn't earn demerits for this one, although one expects more from the more seasoned Rosario Dawson, who engages in a really stupid monster battle. Michael Chiklis (TV's "The Shield," "4: Rise of the Silver Surfer") adds some gravitas as the Secretary of Defense and Charles Carroll ("Disturbia") stands out in a very small role as Sam's band conductor/chaperone. Best of all, as stated earlier, is Thornton, who keeps a straight face while tossing out the films funniest lines.