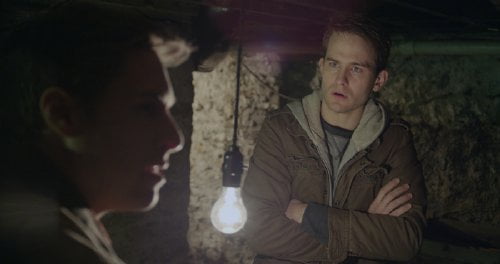 John Whitmore (John McGlothlin) stops on a country road to call his wife to let her know he's gotten a bit mixed up on the way to their cabin and will be late. Suddenly his car radio spins its dial and a creepy female apparition in a hospital gown appears on the road. John wakes up and begins to tell his wife about his dream, only she's not there. Searching the house, he finds a cassette player with a note to play its tape. She's being held for ransom and he's to call a man named David (Ford D'Aprix) to take him and his life savings to retrieve her by "Dusk."

This overly earnest psychological thriller from writer/director Michael Maney has only two things going for it - good performances from its unknown cast and the big twist ending that is the movie's raison d'etre. Otherwise, "Dusk" plays like a student film, its budgetary restrictions clearly evident, its screenplay hitting every paint-by-the-numbers beat. "Dusk" feels like a Christian film, with its clean cut cast frequently advising that every moment of life is precious. The movie has too much plot and too little polish. As instructed, John doesn't call the police, but he does call his old buddy Sam Rigsby (Todd Litzinger) to accompany him on his journey. The two set off with Dave in an old RV, the tape having warned of Dave's 'instability,' advising not to talk to him as he doesn't know the journey's objective. Maney uses flashbacks to show us John's first meeting with Anne (Juliana Harkavy, "Dolphin Tale 2") at a Halloween party thrown by Sam who took a picture of the couple that John always keeps close. We also meet Anne's father Hank Schultz (Robert Pavlovich, "Bad Lieutenant: Port of Call New Orleans"), initially reluctant to hand over his daughter, later supportive. Maney drops in several more dream sequences on cue, a very sappy lovemaking sequence set to a country song, and red herring flashes of Anne's abductor that hint at torture but are never convincing due to the film's Christian vibe. While he uses misdirection, the filmmaker does take pains to drop some clues along the way, some a little too on the nose (how does a tape recording anticipate so much?). The film does have a somewhat satisfying conclusion, but one must endure an eye-rolling ride to get there. Yet one comes away from "Dusk" feeling that given more time and money, it may have developed into something more. The DVD from Monarch Home Entertainment is as bare bones as it gets, the menu offering one option - play movie. Grade: