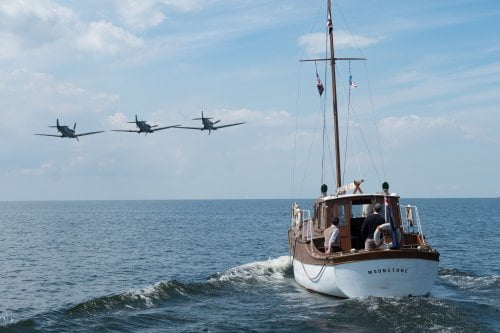 During the late spring of 1940, the Nazi blitzkrieg stormed across Europe, driving the shocked and disorganized Allied armies to the French coast. The expeditionary forces of nearly 400000 British and French troops are trapped and face total destruction – except for the heroic actions of RAF and English men and woman who risk their own lives to take their boats across the Channel to save their soldiers at “Dunkirk.”

Christopher Nolan has made a brilliantly composed and detailed look at victory snatched from defeat in the guise of the hundreds of thousands of soldiers rescued and returned to their country to continue the fight against the Nazis. The filmmaker and his crew researched the epic event and it shows in the accurate details of the equipment, tactics and events that took place on Dunkirk. The story is divided into three chapters/timelines: 1. The Mole (one week), 2. The Sea (one day) and 3. The Air (one hour). This sensibly divvies up the coming action to help keep perspective of events and duration through the eyes of the soldiers on the beach, the men and women who helped rescue them in their boats and the RAF pilots assigned to protect them all against the Luftwaffe. The attention to accurate period detail by the filmmakers is amazing, especially for an amateur historian (like me). Nolan found actual boats, both civilian and military, used during the evacuation, and era-correct Spitfire fighter planes as well as the individual kit and uniforms of the stranded soldiers. “Dunkirk” is a well-documented historical depiction of a little known (to many Americans) rescue mission that changed the direction of the war against Nazi Germany. All the above praise for the technical achievement by Nolan and company, while well-deserved, does not make a complete story. The huge cast represents the courage, fortitude and bravery – and some not so brave – of the British and French who threw in their best to save the army. Mark Rylance, and his young crewman, represents the brave civilians who rose to the rescue in their small boats. Tom Hardy and Jack Lowden are two Spitfire pilots rep’ing the RAF’s mission to save and protect the evacuation. Music heartthrob Harry Styles does not quite represent the soldiers on the b each with a covertly selfish agenda. Kenneth Branagh, as Dunkirk’s ranking British officer, Commander Bolton, is the dedicated officer risking life and limb to save his men. There are many other roles played in this, literally, cast of thousands. The historical action and details outshines the individual stories that are not played out in dramatic detail. What happens to the men is more visceral and matter-of-fact than theatrical drama. With so many players and shifts between the week, the day and the hour overlapping the narration, we get to know precious little of their motivations and fears. With all this said, “Dunkirk” is a finely crafted examination of a historical event that changed the direction of the war. Sure, it was an utter defeat for the Allies who lost virtually all their heavy weapons and escaped with the shirts on their backs. But, the rescue was a morale boost for the beleaguered British people and planted the seed that led to the unconditional defeat of Hitler and the Nazis.