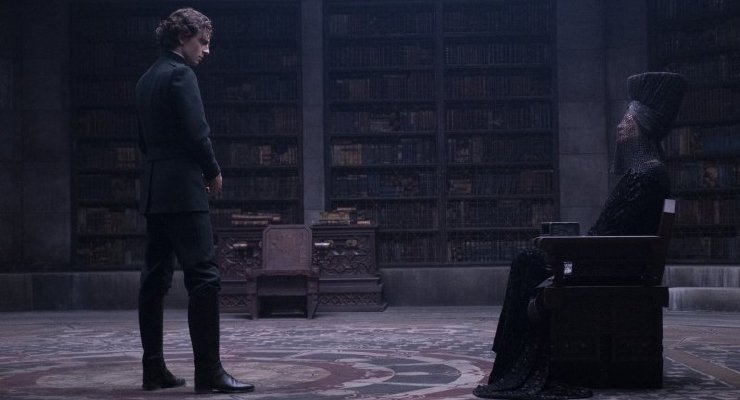 Chani (Zendaya), a Fremen, tells us of her planet Arrakis’s beauty as the light wanes, Spice shimmering in the air.  But Spice is highly valued throughout the empire, enabling inter-stellar travel, and the Harkonnen who have been harvesting it have been brutal in their treatment of the Fremen.  Meanwhile on the planet of Caladan, Paul Atreides (Timothée Chalamet) has been seeing Chani in his dreams and will become mired in politics and betrayal when the emperor decrees that his father, Duke Leto (Oscar Isaac), will assume the role held by the Harkonnen in “Dune.”

I’m still waiting for Alejandro Jodorowsky’s “Dune,” the legendary unmade movie chronicled in 2013’s “Jodorowsky’s Dune,” but in the interim we have cowriter (with Jon Spaihts and Eric Roth)/director Denis Villeneuve’s ("Blade Runner: 2049") adaptation of Frank Herbert’s science fiction classic hoping to do what David Lynch couldn’t back in 1984.  Villeneuve’s is definitely coherent and features a few thrilling moments, but it is also a big, lumbering affair too reminiscent of “Star Wars” with a dash of “Apocalypse Now” that takes over two and a half hours to conclude by telling us ‘This is only the beginning.’

The film takes a lot of time introducing its main characters, many of whom won’t survive ‘part one.’  When he isn’t dreaming, the young Atreides is being prodded by his mother Lady Jessica (Rebecca Ferguson) to learn the mind control powers of the Bene Gesserit, something she is admonished for by Reverend Mother Mohiam (Charlotte Rampling), as the Bene Gesserit are an all female religious organization.  But Jessica believes her son to be what the Fremen call the Mahdi, a Savior the Bene Gesserit have been carefully plotting through breeding.

The Atreides arrive on Arrakis hoping to fulfill their mission with more compassionate rule, the Duke having sent Duncan Idaho (Jason Momoa) ahead of time to form an alliance with the Fremen, but Leto’s suspicions that the emperor has set him up prove true.  While betrayals run deep, there is one motivated by the life of his wife who also supplies the Duke with a method to poison himself along with Baron Vladimir Harkonnen (Stellan Skarsgård) when the time comes.

Kidnapped by Harkonnen during an attack aided by the emperor’s own army of Sardaukars, Lady Jessica and her son overcome their captors to find themselves far out in a desert where giant sandworms threaten.  They will be accepted by both Duncan’s contact Stilgar (Javier Bardem) and Chani after Paul successfully counters a challenge set forth by Jamis (Babs Olusanmokun).

Director of photography Greig Fraser has chosen a dreary palette, Caladan gray and shadowy, Arrakis all sand.  The film’s overall design is unmemorable except for its helicopters, designed to both look and operate like dragonflies.  Scenes set on both Caladan and Arrakis cannot help but recall various locations from the “Star Wars” franchise (ironic given Herbert’s book’s influence on Lucas) and Baron Harkonnen’s introduction is pure Colonel Kurtz.  Hans Zimmer’s score is predictable.  Everything about this film feels serviceable rather than surprising.

That is not to criticize the cast, who all acquit themselves well, Momoa in particular adding some much needed levity.  Isaac makes his character’s loss hit hard.  Chalamet plays Paul as a dreamer stepping up with more and more confidence, but one gets the impression he will be further tested in a concluding film.  The film’s other prominent players are Josh Brolin as Atreides weapons master Gurney Halleck, Stephen McKinley Henderson as security chief Thufir Hawat, Sharon Duncan-Brewster as Dr. Liet Kynes and Chang Chen as Dr. Wellington Yueh.  Dave Bautista is typecast as Beast Rabban Harkonnen.

Speaking of other film influences, this adaptation features a weird new element that feels ripped out of a Christopher Nolan movie, the totemic presence of a bull and matador sculpture representing the Duke’s father, a reference that would make more sense for Isaac’s Gomez character in “The Addams Family” (and yes, I understand the bullfighting is referenced in the book).

Duke Leto Atreides (Oscar Isaac) is given royal stewardship to the vital and dangerous planet of Arrakis, the galaxy’s only source of the precious spice called “mélange.” Political intrigue and betrayal force him to protect his concubine, Lady Jessica (Rebecca Ferguson), and his son and heir, Paul (Timothee Chalimet), and he must put them into the hands of the ferocious Fremen warriors who inhabit the hostile planet in “Dune.”

Frank Herbert’s 1965 novel, Dune, was one of my all time sci-fi favorites when I was growing up in the turbulent ‘60s and it got more than one reading. Then, back in 1984, Hollywood continued serving the science-fiction bug started by the “Star Wars” craze and hired David Lynch (yes, the “Twin Peaks” and “Eraserhead” David Lynch) and spent a boat load of money on the lavish production. The resulting “Dune (1984)” was, well, a dud.

37 years have passed since the failure of that first try and Warner Bros hopefully thinks the world forgot all about it. This time around, they hired an experienced sci-fi director with Denis Villeneuve and, co-writing the script with Jon Spaihts and Eric Roth, they come up with a two hour and 35 minute PART ONE to the “Dune” saga.

House Atreides is just one of the families controlling the intergalactic empire in the year 10191 and there is a constant jockeying for power in the realm. This ongoing political intrigue is the beginning of the beginning of the story, “Dune.” If you have not read the book, look up a good synopsis of the story to give you some firmer footing when you watch.

The elements of the original story are all there and the filmmakers do a good job in laying the groundwork for the large and capable cast. The money is up there on the screen with flashy CGI that effectively lay out this distant future universe. The production looks great and puts us into the harsh desert world of Arrakis with its coveted spice and, more important and deadly, the sand worms that protect the planet and its Freman habitants.

The problem that I have with this part one of the story is that I know all of the really good stuff takes place in the second half. Thus, knowing the book and story, I knew I was only getting a snack posing as a banquet and will have to wait some undefined time before we get the rest of the story. It is a good thing that the first half is well done, but, to steal a line from Rock Head in “Sid & Nancy (1986),” “I hate to wait!”