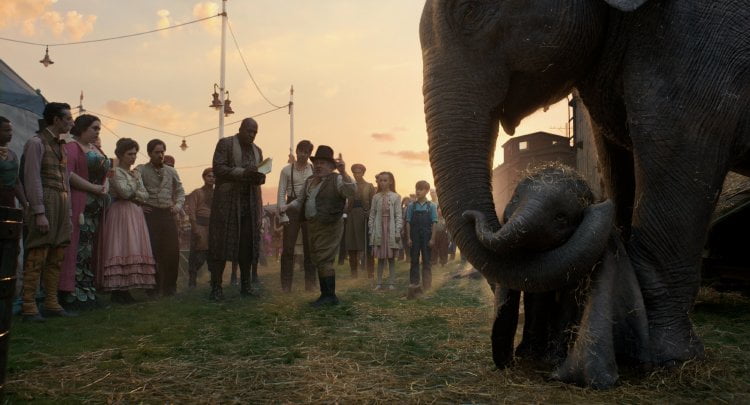 In 1919, young Milly (Nico Parker) and Joe Farrier (Finley Hobbins) are thrilled when their father Holt (Colin Farrell) finally returns from the war. Now missing his wife, who died during his absence, as well as his left arm, Holt learns his act at Medici Brothers Circus is no longer, its owner Max (Danny DeVito) having sold Holt’s horses and reassigned him to elephant maintenance. But something magical happens when Max’s new Asian elephant Jumbo gives birth to a baby with oversized ears, mockingly dubbed “Dumbo.”

Director Tim Burton, who hasn’t made a really good movie in over ten years, disappoints again with the latest of Disney’s live action remakes of their classic animations. One has to wonder why they even bothered, the human element demoting characters like Timothy the mouse into barely-there cameos, its titular character still an animation, albeit one that bears some scant resemblance to the real thing. Most of the acting is wooden, only Eva Green’s French trapeze artist providing any snap. Not even Burton’s usual pizazzy art direction is on display here, the whole production on the dingy side, which is particularly strange given the film’s circus environments. Danny Elfman’s score is initially unrecognizable as his work before becoming merely uninspired. “Dumbo” is flat, even its airborne moments lacking magic. Screenwriter Ehren Kruger, with his filmography of Transformer and horror movies, seems an odd fit for this material, which might explain why it often feels overly sadistic with its widowed war amputee and brutal capitalists. When Millie and Joe learn the rejected misfit elephant can fly, in swoops V. A. Vandevere (Michael Keaton), a P. T. Barnum with a dark heart who offers Max a partnership in his Dreamworld amusement park, more Disneyland than travelling circus. Little Dumbo, who’s been separated from his ‘mad’ mother, finds her here once again, disrupting the show meant to impress investor J. Griffin Remington (Alan Arkin). Vandevere’s solution is a final one. Jumbo looks realistic, but Dumbo, with his big baby blues, more resembles a creature from a child’s greeting card. The basic elements of the 1941 film are here, but this film strains to include them. A stork lands on Jumbo’s train car, then takes flight. A caged mouse in a red ringmaster’s costume exists but is never worked into the plot. The pink elephants of the original Dumbo’s drunken hallucinations are somehow concocted as blown bubbles in a circus ring, balloon animals given unrealistic soap form. Burton and Kruger’s big climax is based on an equally unfeasible and coincidental occurrence. Disney famously fired Burton, who’d worked on “The Fox and the Hound” and “The Dark Cauldron,” over his 1984 short ‘Frankenweenie,’ one of his most distinctive works. How ironic that he’s become one of their go-to directors for disappointing takes on other people’s art. Grade: