Dumb and Dumber To 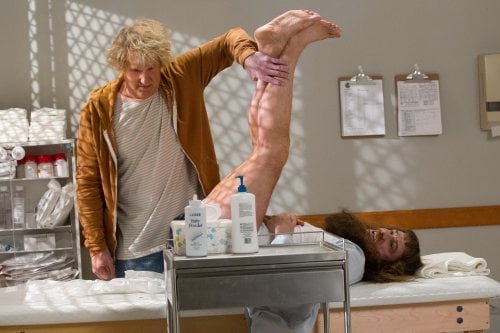 For 20 years, Harry Dunne (Jeff Daniels) has been visiting the comatose Lloyd Christmas (Jim Carrey) weekly, even changing his nappies, but when he arrives to tell Lloyd that he has to leave to find a kidney donor, Lloyd 'comes to' to tell him it was all an elaborate joke, right down to the shock therapy and partial lobotomy! But Harry will surprise with the last laugh after the fellas hit the road in "Dumb and Dumber To." Somehow I managed to never see the original until shortly before seeing the sequel. Based on the back-to-back viewings, I'd have to say the sequel no one was looking for (with the non Carrey and Daniels follow up "Dumb and Dumberer" already lost) is actually a bit funnier than the first, but, the Farrelly Brothers never having been arbiters of good taste, you have to wade through a lot of scatological (and racist) dreck to get to the real funny. Twenty years later, these arrested adolescents don't really seem to have aged that much and when Carrey isn't contorting hot dogs into his gullet or Daniels being blissfully ignorant, there are plenty of sight gags to keep one chortling. (An early one features Carrey talking about comic timing as a bus barely misses the oblivious duo.) First, the duo revisit their old apartment where Harry still lives with a meth producing roomie, Ice Pick (surprise guest star!) and his high-as-a-kite cat Butthole (who will reappear to further torture Billy in 4C and his pet birds). They make the journey to see Harry's estranged parents - a block away - and Harry must be told his adoptive Asian mom and dad are not the genetic match he's looking for. But in the box of mail they've saved is a postcard from Fraida Felcher (Kathleen Turner) informing Harry he was to be a father years ago (oh, and he got accepted into Arizona State). In one of the film's funniest gags, Fraida, a 'Titanic whore,' sends them off to find Penny (Rachel Melvin) via a returned letter she'd written to her daughter, but the guys keep using the return address. When they finally get to Maryland, where Penny's Nobel prize winning scientist adoptive dad Dr. Pinchelow (Steve Tom) is being slowly poisoned by his gold-digging wife Adele ('The Walking Dead's' Laurie Holden) and hunky handyman Travis (Rob Riggle), they learn Penny's flown off to give a talk for him at a KEN conference in El Paso. Seeing an opportunity, Pinchelow asks them to transport the box she forgot (Penny's been introduced as a real chip off the old blockhead), containing an invention that will benefit mankind. Learning that it could be worth a billion, even though he's giving it away, Travis is recruited by Adele to travel with them. Additional conflict looms as Lloyd crushes on Penny's picture. With his uncapped, chipped tooth and Moe Howard haircut, Carrey is as elastic as ever. Daniels, in a 180 degree turn from his 'The Newsroom' character, gets a lot more of his own time, flashing back to 'might have been' fatherhood scenarios (one of which unfortunately features Honey Boo Boo mom June) and, funnier, judging student invention demonstrations masquerading as Pinchelow. Riggle does double duty as Travis and his Special Ops twin brother, magically appearing out of backgrounds he's been painted into. Melvin's quite funny as a naive ditz. "Dumb and Dumber To" can be groan inducing, but it's also surprisingly entertaining in ways both smart and stupid.