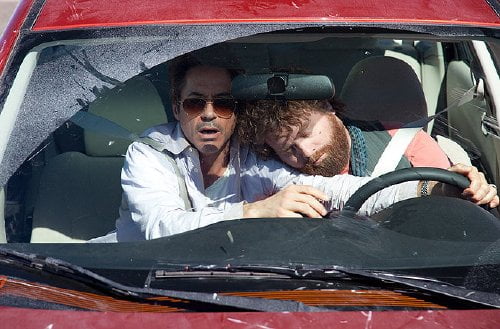 Uptight architect Peter Highman (Robert Downey Jr.) runs into the worst possible person he could when arriving at the airport to return from a business trip. Ethan Tremblay (Zach Galifianakis) is a wannabe actor, a naive pot smoker who doesn't recognize boundaries. It's bad enough that Peter ends up with Ethan's bag containing a pot paraphernalia, but when Tremblay's bumped up to First Class and seated behind him, his objections to Peter's Blackberry use include the words 'bomb' and 'terrorist,' getting them both thrown off the plane and put onto the 'No Fly' list when Peter has only three days until his wife's "Due Date."

The latest from Todd "The Hangover" Phillips is for all intents and purposes a remake of "Planes, Trains and Automobiles" with a nastier, more violent vibe. Robert Downey Jr.'s portrayal of a man with a hair trigger temper combined with little tolerance for much of humanity makes for a unique protagonist, someone who just about deserves his fate. Downey Jr. is seemingly incapable of a bad performance, but Highman is unusually well crafted for the genre. Galifianakis adds more layers of shading than in his previous Phillips flick, his Ethan both irritating and oddly endearing. If only the film weren't such an unacknowledged retread and so predictable. Let's get comparisons out of the way first. Just like Steve Martin's Neal Page, Peter is the Felix of the duo, trying to return home for a family event. And just like John Candy's Del Griffith, Ethan is the Oscar, overweight and unkempt, whom Peter will learn has just lost a loved one. They will endure uncomfortable sleeping arrangements with homosexual subtext and battle unreasonable service representatives. But although the two attain a relationship approaching friendship near film's end, it won't be nearly as warm and gooey as Neal and Del's detente and that's a good thing. As in "Planes," Peter begins in Ethan's debt. Having left his wallet on the plane, Highman grudgingly accepts Tremblay's offer of a ride. First stop, weed dealer Heidi (Juliette Lewis), located on Craig's list where Peter must deal with unruly children (Downey Jr.'s upper hand is hilarious, nervy physical comedy). Before their journey's over there will be two spectacular highway incidents, countless broken laws, assault by a handicapped veteran (Danny McBride), contact highs, Mexican border cops, mishap with Ethan's dad's ashes, a gunshot wound and a masturbating dog. If some of the film's main acts are easily foretold, its little details can be wonderfully strange, like Peter's dream of a bear chewing through his child's umbilical cord or Ethan's fansite for "Two and a Half Men." The film's funniest line is a bit of self referential humor on Downey Jr.'s part (just like his character's last name?) and Galifianakis's hair and costuming is inspired. He's outfitted in a Lilith Fair tee adorned with a fringed herringbone scarf and wears bone colored lace-ups which he minces about in. And when's the last time you had a running gag on the male perm? One of the film's biggest surprises is the appearance of Jamie Foxx as Darryl, a Dallas Cowboys football player who comes to Peter's aid because he happens to be Sarah Highman's (Michelle Monaghan, paying the rent) ex. "Due Date" succeeds more as a character than plot driven comedy and Downey Jr. shines in it.