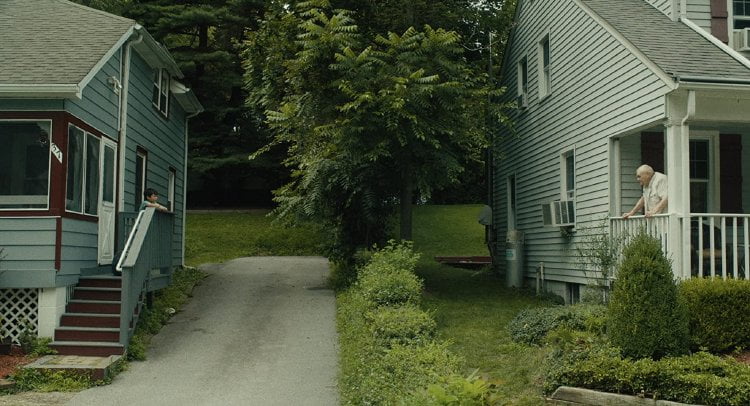 It is not until single mom Kathy (Hong Chau, "Downsizing") and her nine year-old son Cody (newcomer Lucas Jaye) finally arrive at their destination that we realize their trip’s purpose – to clean out the Poughkeepsie home of Kathy’s older sister April.  The look of horror on her face as she opens the home’s back door tells us what is quickly confirmed – that April was a hoarder and that this job is orders of magnitude greater than what Kathy was expecting.  Hunkering down for a longer than expected stay, Cody makes an unlikely friend in the widowed Korean veteran, Del (Brian Dennehy), who lives next door in “Driveways.”

Writers Hannah Bos and Paul Thureen leaned on their own experiences to come up with a story that, on the face of it, has been told many times before, director Andrew Ahn coming up with the idea of emphasizing Kathy and Code’s outsiderness by making them Asian (and leading us to expect some “Gran Torino”-style racism from Del).  But this isn’t just another one of those ‘old person/young person transformational friendship movies,’ instead a more thoughtful rumination on assessing our pasts and forging new paths told with great sensitivity and a very strong sense of place.

Cody’s the type of kid who keeps his face buried in his computer games, but he’s always aware of his tougher, worldlier mom.  Like their destination, it is only gradually that we become aware of how limited Kathy’s funds are.  She is unable to get power turned on at April’s due to the $900 electricity bill in arrears and moves herself and her son onto April’s screened in porch when motel life becomes too dear.   After Del notices Cody trying to turn the outside faucet on in the wrong direction and tells him how to do it from across the way, Kathy informs him that Cody has been taught not to talk to strangers.  But after Cody comes running back to an empty house after clashing with the wrestling grandsons of nosy neighbor Linda (Christine Ebersole), it is Del who provides safe harbor, breaking down Kathy’s defenses.  Afternoons spent on Del’s porch with popcorn on an old TV tray and stacks of National Geographics follow, the older man enjoying the quiet kid’s company.

“Driveways” doesn’t just focus on Cody’s relationship with Del, instead separately observing Kathy and Del trying to make peace with past regrets.  Kathy realizes she never really knew the sister twelve years older than her whose hoarding issues may have signaled deeper problems (cinematographer Ki Jin Kim frames Chau with a box stamped with the brand name ‘Mother’s’ over her shoulder), while Del offers hints of a nice yet troubled woman ashamed of the state of her home.  In a powerful last act monologue, Del relates his years with Vera to Cody, imparting the wisdom of telling people how you feel during the moment.  The scene is like the beginning of Pixar’s ‘Up’ merged with its ending.

We also witness Del interacting with his old army buddies, gathering at the local VFW hall to play bingo.  His closest friend, Roger (Jerry Adler), is clearly starting to lose his mental grasp, adding a layer of poignancy, but when Cody’s 10th birthday ‘party’ at a local roller rink is a bust, the VFW’s bingo players save the day.  These unlikely interactions bring Cody out of his shell.

In one of his last performances, Dennehy projects a lot with a little, Del’s taciturn nature going hand-in-hand with Cody’s single-child studiousness.  Jaye is a natural and he and Dennehy click with an unspoken bond.  Chau, whose quick cigarette breaks imply a certain brittle quality, softens during her own journey, satisfaction with a job well done and observation of her son’s budding confidence offering a potential new path.  The filmmakers don’t offer us a pat ending, yet arrive on the perfect last long shot.

“Driveways” never strains to make its points, naturally unfolding in a quiet slice of everyday life.  It’s a lovely film.

Kathy (Hong Chau) and her son, Cody (Lucas Jaye), make the long journey from the city to rural upstate New York. Their mission: to clean out and sell the home of Kathy’s late, elder sister April. They are not prepared for the smell, the daunting amount of hoarding and emotion they must deal with in “Driveways.”

Director Andrew Ahn, with a script by Hannah Bos and Paul Thureen, delivers a quiet and charming slice of life film that is also one of male bonding, kind of like “The Karate Kid” or “Gran Torino.” Here, we have Kathy obviously struggling with life as a single mom of a sensitive child, who is a scaredy cat, but because of his overly protective mom.

Their next door neighbor, Del (Brian Dennehy), is a retiree and Korean War veteran living out his waning days as a long time widower. Cody is drawn to the old man, but Kathy, in overprotective overdrive, makes Del keep his distance. She hunkers down to the enormous task of cleaning out April’s house and preparing it for sale – but there is no electricity and Kathy cannot get it turned on. When she returns to the house, she finds an extension cable running from Del’s place and she has power.

This act of kindness, and Cody’s budding friendship with Del, softens Kathy and, as she makes progress in her mission, the possibility of a new life in the house comes into play for her and her son. This possible new life is enhanced by Cody and Del’s bonding that becomes very much that of a granddad and his grandson.

Not a heck of a lot happens during the course of “Driveways,” but that is what a slice of life story does best. It puts you in the center of the lives of ordinary people where ordinary things can create extraordinary change. It is also, unfortunately, one of Brian Dennehy’s last films.

“Driveways” will be available on VOD on 5/7/20 and is playing at the virtual theaters listed here.