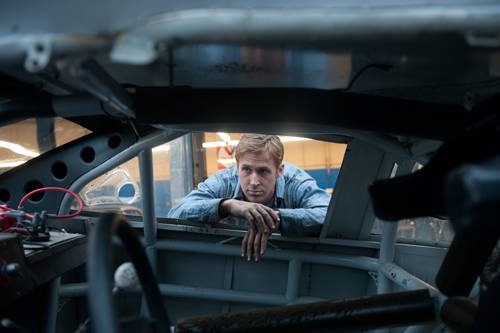 By day, the Kid (Ryan Gosling) is an expert stunt driver for the movies. By night, though, he is a driver for hire. But, he is not just an ordinary driver – he will give a customer five minutes of his professional expertise to be used in any way the client wants him to “Drive.”

I'll give you 5 minutes the driver (Ryan Gosling, "Crazy Stupid Love") says over his cell phone as he looks over the lights of Los Angeles from his noirish looking apartment. He's true to his word when, sitting outside of his clients' heist location, he hears the police not the presence of his car over his radio scan. He waits for the second thief, who makes it within his time frame, and then he does what he does bet - "Drive." Director Nicolas Winding Refn follows up his near-silent uber-violent "Valhalla Rising," in which a one-eyed warrior sacrifices himself for a young boy, with "Drive," in which a Ryan-Gosling-of-few-words plunges himself into the gravest danger to save the mother of a young boy. "Valhalla Rising" was stunningly set against the Scottish Highlands of yore. "Drive" is set in the L.A. of Michael Mann's "Thief" with an original score by Cliff Martinez ("Traffic") that sounds an awful lot like Tangerine Dream. Winding Refn win Best Director at Cannes for "Drive" and it's easy to see why - here is a filmmaker in complete command of his material. Those opening minutes are a symphony of location, movement and editing, a tense cat and mouse game which we can see being plotted on Gosling's amazing face. But this getaway driver who is never named, called 'the Kid' by his boss and mentor Shannon (Bryan Cranston, AMC's 'Breaking Bad,' "Contagion"), is more than that we gradually learn. By day he works as a mechanic in Shannon's garage when he's not doing hair-raising stunts for Hollywood movies. Shannon, crippled by his association with the underworld, is a good guy whose belief in the kid takes him to Bernie Rose (Albert Brooks) asking for financing for a race car. As this deal is being dealt, the kid meets his neighbor Irene (Carey Mulligan, "An Education," "Wall Street 2"), who comes to Shannon's when her car breaks down. The attraction between the loner and the single mom whose husband is in jail is evident from the shy smiles exchanged between them - a wordless courtship the actors make deeply affecting. The kid also happens to be a natural with Irene's young son Benicio (Kaden Leos). After bright daytime drives down the Los Angeles River and evening drives after a babysitter's engaged, the ethereal romance takes a dramatic shift. Irene's husband, Standard (Oscar Isaac, "Agora," "Sucker Punch"), comes home. Winding Refn and his cast do a tonal two step, at first introducing the macho tension we'd expect in this scenario, but then, with Irene's gentle guidance, nudging the kid and Stan into uneasy friendship. When the driver discovers Stan badly beaten in their apartment's underground garage and learns that Stan's family is being threatened because of prison debts, he offers to step in and help but he walks right into the elaborate and insane plot of Bernie's unhinged partner Nino (Ron Perlman, "Hellboy"), the man responsible for Shannon's bad limp. Cinematographer Newton Thomas Sigel ("Valkyrie") and editor Matt Newman ("Valhalla Rising") bring Refn's vision to velvety, neon light, movement choreographed so that it almost appears to float. Production design, art direction and costume (That blood stained white jacket, embroidered with a scorpion! That mask framed in the window of a pizza shop door!) all add up. The cast is one of the best ensembles of the year. Cranston is utterly moving as a bad luck loser; Brooks elevates his tough-as-nails gangster with an eerie, rational calm and Perlman's perfect as the less bright hothead. Be forewarned - the violence which follows in the film's latter half is extreme, with one head bashing in an elevator approaching the level of Gaspar Noe's "Irreversible." And yet, Refn finds many tones as several bloody sequences unfold, one involving Albert Brooks and kitchen utensils blackly humorous. Slo-mo and the literal lyrical commentary from soundtrack selections wouldn't work in hands less sure than these, but Refn has created some kind of romantic macho masterpiece with "Drive," perfectly embodied by Gosling, both hard and soft, as his hero. This is new age noir where the dames are still duplicitous (Christina Hendricks, AMC's 'Mad Men') or divine (Mulligan). Winding Refn only leaves one t uncrossed, one i undotted, when he returns to the scene of an outrageous shootout that bears not even a shred of police tape, let alone structural damage.

Danish-born director Nicolas Winding Refn is known for his hard-boiled crime dramas like “The Pusher” trilogy and ”Bronson,” but here he is a hired gun for this adaptation, by Hossein Amini, of the James Sallis novel. In a way, this relinquishing of his usual control over his film projects is liberating as the director gets to concentrate on his characters, particularly the Kid, and elicits a solid character study by his star. The Kid is a man of very few words who masks his emotion with a secret half grin and ever present toothpick in the corner of his mouth. He befriends his neighbor, sweet and kind Irene (Carey Mulligan), and her little boy, Benicio (Kaden Leos), continues working his day job as stunt driver for his boss, Shannon (Bryan Cranston), and moonlights driving for the LA criminal element at night. You know that these three things will collide but not to where and how. It helps that the Kid’s taciturn nature and mostly monosyllabic dialog help keep his actions and motives a mystery. As the Kid’s life unfolds before us – his chaste romance with Irene becomes complicated when her husband, Standard Gabriel (Oscar Isaac), is released from prison and we learn his violent back story. Then there is Bernie Rose (Albert Brooks), a ruthless mobster who masks his inner violence with an almost benign face, who hires the Kid to drive his race car. Shannon is the Kid’s mentor and friend who will accidentally betrays his student turned master driver. Carey Mulligan starts off sweet and ends sweet in a thankless performance that is to garner sympathy for the mostly unfathomable Kid. Driving, one would think, would be a key element of a movie called “Drive,” but the title is more a metaphor than a physical aspect of the film. There is, in fact, very little driving going on here. After the initial five minute getaway sequence, which establishes the Kid as a fearless, skilled driver, there is not another action scene for 30 minutes. The filmmakers spend the time weaving an interesting crime thriller with a studied performance by Gosling that ratchets up the violence quotient at a steady rate.