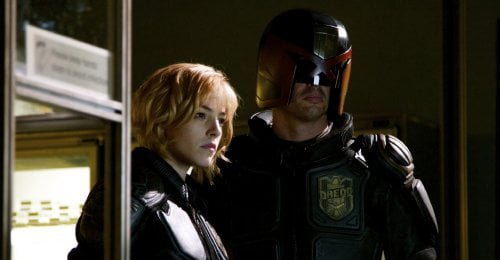 Mega City One extends from where Boston to Washington DC used to be. The countryside is a nuclear wasteland and the massive city is ruled by criminals, drug dealers and the most unsavory of folk. There is but one force that opposes the rampant crime and mayhem, the Judges. The best of these brave few is a one-man judge, jury and executioner called “Dredd.”

In a future dystopian America, most of the population is crammed into Mega City One. Crime is rampant and a new drug known as Slo-Mo is making things worse. Justice is now meted out by 'judges,' a police force with the power to also mete out sentencing and carry out immediate executions. On the day three horrific murders take place at the 200 story tall slum known as Peach Trees, the force's most feared judge is training psychic rookie Cassandra Anderson (Olivia Thirlby, "Juno," "Being Flynn"), who makes the call to respond with her mentor "Dredd." Seventeen years after Sylvester Stallone's version caught all kinds of flack for removing the titular character's helmet comes a new, 3D version which does not. And yet the story, based on the comic book characters by Alex Garland (" 28 Days Later...," "Never Let Me Go"), is so similar to this year's Indonesian cop thriller "Raid: Redemption," it's like two remakes in one. Karl Urban (2009's "Star Trek," "RED") deserves credit for creating a character with only his mouth and chin exposed, but he's essentially a human Robocop (Cassandra's psychic mutation means she cannot wear a helmet, so at least one of the pair is relatable). So make that three remakes. The best thing about "Dredd 3D" is it's villainess, Ma-Ma (Lena Headey, "300," HBO's 'Game of Thrones'), a disfigured prostitute turned drug lord with a heart of venom. Go for some pulpy fun and ultra violence filmed in multi-layered 3D slo motion by Oscar winning cinematographer Anthony Todd Mantle ("Slumdog Millionaire"). Look for anything more and you're going to come up short. Seeing as how judges are spread so thin and crime is so rampant that only 6% of crimes are responded to, it's been a long, long time since the law descended on the notorious Peach Trees. Dredd is not to be deterred and when his and Anderson's plan of attack yields Kay (Wood Harris, HBO's 'The Wire,' "The Babymakers"), Cassandra divines that not only have they probably got their actual murderer, but a key to something bigger. When they decide to take him in for questioning, Ma-Ma, who has squelched the three notorious gangs who used to run the block, decides he cannot leave alive and forces the building's security tech (Domhnall Gleeson, "Harry Potter's" Bill Weasley) to convince Sector that they're scheduled for a lockdown test. The building sealed, Ma-Ma gets on the PA system to instruct her flunkies to terminate the two judges. Just like in "Raid: Redemption," the duo must make their way up floor by floor toward's Ma-Ma's den. Also like that film, internal corruption will play against them. (And yet, after 'Control' is contacted, why can't the lockdown obtained under false pretenses be revoked? Never addressed.) Nice of Danny Boyle semi-regular Garland to hand Boyle's regular photography guy a drug called Slo-Mo because it gives him a number of opportunities to do that kind of floating suspension 3D effect we've seen in movies like "The Other Guys.". Want to see what it looks like when a bullet exits someone's cheek in fine detail or how the body reacts to being dropped 200 stories from beneath a glass floor? This is your movie. The rest of the film is like a maze-like video game where two shooters walk industrial corridors defending themselves against unseen assailants, at least until the really big guns come out. Some interest is added by Kay's attempt to play mind games with Anderson, but it is also an excuse for the depiction of some particularly nasty violence against women. Paul Leonard-Morgan's ("Limitless") score boasts percussive riffs from the impression of a heart beat to the clanging of pipes, not the usual same old. "Dredd 3D" is just good enough that a sequel by the same team of filmmakers might be welcome if they can get new ideas to the screen before somebody else does.

This unnecessarily 3D actioner, about the veteran and the rookie going into harms way has been done before but that is not what is derivative in “Dredd 3D.” If you saw last year’s superior police-invasion-of-a-very-bad-guy-stronghold, “The Raid: Redemption,” you experienced the better, more exciting film. Unlike the Hollywood version of the uber-judge, “Judge Dredd” starring Sylvester Stallone, this rendition is based on the comic book characters from Carlos Ezquerra and John Wagner’s 1970’s 2000 AD. This graphic novel heritage shows in the straightforward shoot-'em-up as Dredd and his newly assigned partner, psychic rookie Cassandra Anderson (Olivia Thirlby), investigate multiple murders at the notorious Peach Trees, the 200-story armed fortress run by ruthless crime boss MaMa (Lena Headey). Once the judges get inside, MaMa overrides the security system and locks the Peach Trees down and orders that Dredd and Anderson be killed. A running battle ensues as the two judges take on a heavily armed army of killers who, for some reason, cannot rid themselves of the law, even with three huge electric Gatling cannon. As for the 3D, at many points I took the glasses off and watched entire scenes in 2D, making the transition to 3D unnecessary and more expensive for the average film-goer. Fans of the comic book series will likely enjoy the action and the mayhem but the characters are anything except 3D, excepting Lena Headey as scar-faced and scary MaMa. F/X are explosive and non-stop, with Dredd relying on his gun to follow his commands, like ordering a “double whammy” or “armor piercing” to accurately subdue the heavily armed perps. MaMa and her thugs, on the other hand, take out entire floors of innocent victims while trying to kill the judges. The 95-minute runtime moves along at a quick pace and there is some attempt at creating at least one character, Cassandra, but Dredd remains ensconce in his signature helmet with mostly growled orders emerging from his maw. The target teens and tweenies will enjoy it, though more mature audiences will not be satisfied. I think I will watch “Judge Dredd” again. It is a lot more fun – think Rob Schneider mimicking Dredd’s “I am the law” tag line.