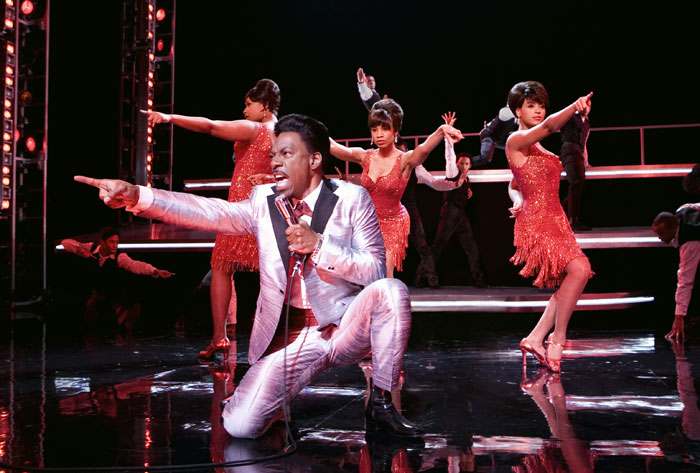 When three young teenage girls arrive late for their slot on a Detroit talent show, car salesman Curtis Taylor, Jr. (Jamie Foxx, "Ray") recognizes the act that will give him his shot at music industry fame. Curtis's ambition turns him into a monster who breaks hearts and promises as he turns his trio of R&B singers into a pop music phenomenon in "Dreamgirls."

The long-gestating film version of the 80's Broadway musical is finally realized by writer/director Bill Condon ("Gods and Monsters," "Kinsey") and from cast to costume fans should not be disappointed. Destiny's Child lead and solo recording artist Beyoncé Knowles leaves her "Austin Powers" and "Pink Panther" eye candy roles in the dust, turning in a very credible Deena Jones, an ambitious yet vulnerable Diana Ross inspired character. But as Effie White, the Dreamgirl left behind, Jennifer Hudson may have lost American Idol only to have won an Oscar. Effie is the big girl with the big voice whose brother, C.C. (Keith Robinson, TV's "American Dreams"), writes the songs the Dreamettes sing, while Deena is the pretty one with the protective mother. The group is rounded out by the naive and starstruck Lorrell (Tony award winner Anika Noni Rose). When the girls lose the contest, all seems lost until Curtis pitches them a shot at singing backup for James “Thunder” Early (Eddie Murphy, "The Haunted Mansion," "Shrek 2"). Effie initially turns him down, but Curtis's salesmanship ensures they're on the stage with the man that very evening. The next day the threesome is on tour on the “Chitlin’ Circuit,” with romance blooming between Effie and Curtis while married ladykiller Jimmy tries to court a hugely flattered but resistant Lorrell. All is well until a recording by Jimmy and his backup girls is co-opted and made into a big whitebread hit by a Pat Boone type. Curtis has his moment of revelation and through sheer force of will manages to break the racial divide by booking the act into a Miami nightclub. Jimmy's old school manager Marty is casualty number one, but when Jimmy's unabashed sexuality provokes the white audience, his becomes second fiddle to the group Curtis rechristens the Dreams - with Deena as the lead singer. "Dreamgirls" has long been recognized as a gloss on the real life rise of Diana Ross and the Supremes and Condon knows how to mix the grit of 1960's Detroit with the glitter of 70's disco. The characters may be surface types, but the cast is good enough to inject them with emotional variants, often through song (Hudson's mid-movie power house performance of “And I Am Telling You I’m Not Going,” Beyoncé's third act revelatory "Listen"). Foxx mines a different kind of darkness than his Oscar winning role as Ray Charles, money and power tightening a grip around this shrewd hustler's heart. Eddie Murphy gives rather black and white readings of the entitlement of success and abandon of failure, but the performer comes alive on stage. Anika Noni Rose is warm, wide-eyed and kittenish as the Dream caught between two very different divas and Michelle Morris (Sharon Leal) captures the wary blandness of the round peg taking the square one's spot. Original Broadway Dreamgirl Loretta Devine ("Crash") cameos as a jazz singer in Effie's comeback club. Costumer Sharen Davis ("Ray," "Akeelah and the Bee ") knows from the rounded femininity of 60's chiffon and bouffant to the androgynous angles of Rudi Gernreich. Costume, makeup and hair are outstanding - truly award worthy - and Condon revels in their work in a brilliantly assembled "Mahogany" inspired 70's montage. In the end, "Dreamgirls" may be as light as the girl pop which inspired it, but it really works as an abstracted collage of an era that defined musical and racial crossover.