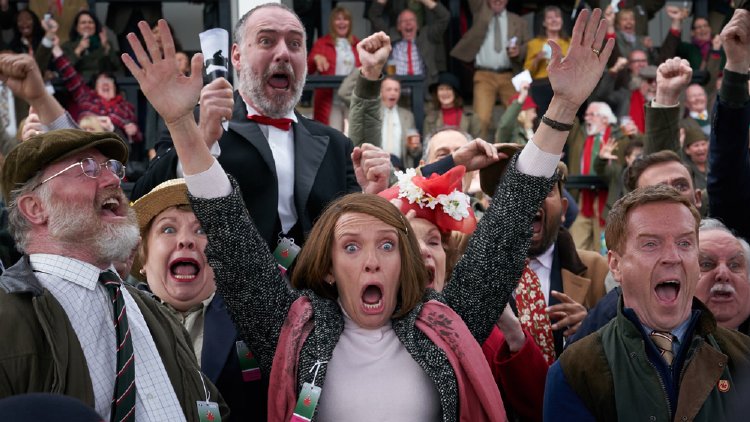 Former whippet and pigeon breeder Jan Vokes (Toni Collette) arrives at her job at a supermarket near dawn to polish the floors before cashiering for the rest of the day, then heads to a second job at a local pub at night.  It is there that Jan overhears Howard Davies (Damian Lewis, Showtime's 'Billions') talking about the racehorse he once owned.  Needing something for her and her disabled husband Brian (Owen Teale, HBO's 'Game of Thrones') to live for, Jan asks for Howard’s advice about her idea to breed a “Dream Horse.”

This true story about a woman in a small, economically depressed Welsh town who formed a syndicate for the upkeep and training of a horse that would go on to win the top racing prize in Wales was the subject of the award-winning documentary “Dark Horse,” a crowd pleasing work that was about a lot more than horse racing.  But something went off course on its way to a feature adaptation, screenwriter Neil McKay (TV’s ‘See No Evil: The Moors Murders’) stripping much of the subtext and some of the clarity from the far superior documentary.  This “Dream Horse” has been hobbled.

Both Jan’s background and the history of the town are largely fluffed over, although her current situation, with an arthritic husband who spends all his time in an armchair and caring for aging parents, is obviously depressing.  In no time at all, she’s the owner of a £300 mare, Rewbell, and found an affordable stud horse (Brian, nicknamed ‘Daisy,’ has little to do with any of this yet he did in real life).  A few flyers are posted around town and a syndicate is born.

McKay maintains the major beats of the documentary, as well as some of its funnier moments, like the class clash this group of owners encounters when they arrive at Sandhill Racing Stables or for races at Newberry.  Director Euros Lyn (TV’s ‘Doctor Who,’ ‘Last Tango in Halifax’) keeps us gritting our teeth as these majestic creatures jump over the steeplechase obstacles which will bring the story to the brink of tragedy, yet fails to indicate just where Dream Alliance places in his first race, something we’ll only learn through newspaper headlines.

The ensemble is fine, with veteran actress Siân Phillips, Di Botcher and Karl Johnson comprising most of the syndicate’s ‘color.’  Nicholas Farrell supplies sympathetic snobbery as Philip Hobbs, the illustrious trainer who agrees to take on Jan’s unknown.  As Howard’s disapproving wife Angela, Joanna Page (TV's 'Gavin & Stacey') scolds…until she doesn’t, another failing of the script.  Collette doesn’t get to spend enough time with her character’s horse to make the bond believable.  Lyn adds ‘Welsh flavor’ by indulging in several renditions of Tom Jones's 'Delilah.'

“Dream Horse” may please those unfamiliar with the story, but it is a pale imitation of the real one told in the 2015 documentary “Dark Horse.”

In 2015, documentary director Louise Osmond brought us “Dark Horse: The Incredible True Story of Dream Alliance,” following the denizens of a small South Wales town who chip in their hard earned savings to buy a broodmare and breed a champion. Now, we get the fictional look at that string of equestrian events that make up “Dream Horse.”

Director Euros Lyn takes the charming true-life story about a town rallying together behind one woman’s dream to breed a winning race horse and fictionalizes it. My problem with the adaptation of the delightful and real rags-to-riches story is that it is merely a pale copy of the charming original documentary, going through all the motions but lacking any heart or soul.
Toni Colette stars as Jan Vokes, a clerk at a Welsh supermarket who, to make ends meet, also works at a local pub. There, she overhears a patron, Howard Davies (Damian Lewis), talking about glamour and potential of owning a thoroughbred race horse. On the spot, she decides that this is the answer to her problems and to live a dream. This sets into motion the plan: find a brood mare for cheap, breed her and make her progeny a winner.

What transpires – bringing members of the town into the plan with an investment of ten pounds each a week to cover the costs – is a letdown. The screenplay, by Neil McKay, touches on all the bases from the real-life story but the problem is it lacks the warmth and excitement of the original documentary.