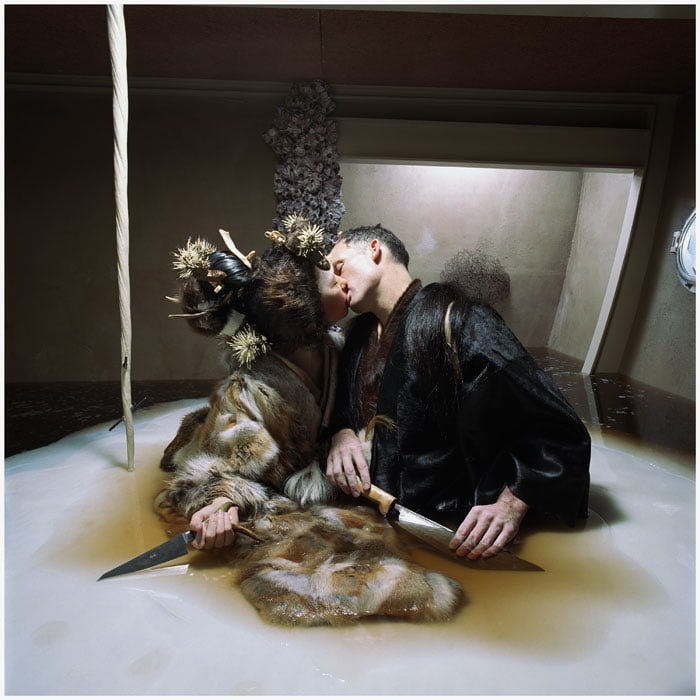 Several groups of fan dancers lead snaking parades towards the whaling ship Nisshin Maru, where workers construct a large oval vat bisected by a long rectangular line. The ship sets sail. A bearded man in a long heavy coat (writer/director Matthew Barney) arrives in a small tug and is deposited on the ship via crane as is the woman (Barney's partner, singer/songwriter and the film's composer Bjork) who arrives separately wearing a fuchsia clock and an elaborate, Geisha-like hairdo. This couple has been invited to partake in a ritual that explores the cycle of life in "Drawing Restraint 9." Undeniably a Barney film to anyone who has seen his "Cremaster" series, "Drawing Restraint 9" features stunning visuals, repeated symbols and obscure meaning (it's all about sex!). For all its dawdling pace, the film is never boring and somewhat more linear in its 'storytelling' than Barney's previous work, but it suffers from the loss of experiencing Barney's visual imagination for the first time. Female pearl divers, all clad in white, put their bounty in buckets and discover a fossilized reef (or perhaps a whale penis) before the Nisshin Maru fires its phallic high tech harpoon into their waters. The ship's chefs prepare shrimp, a creature capable of changing sex, with pomegranates, fruit that symbolize fertility. Barney is shaved, a strip of hair removed from his pate, his eyebrows removed like a Buddhist monk's, then attired in kimono and sandals made from what appears to be shell or whalebone. Bjork bathes with oranges, strips of their skin removed from their middles like that vat on deck breeding a gelatinous mass. Her eyebrows are removed too, her hair made up more elaborately and adorned with sea urchins. The couple will be united for a tea ceremony where the tea is replaced with bright green ambergris before their private lovemaking evolves into their flensing of each other, the fat of their legs like the blubber of a whale. Barney's images are recognizable. As he settles into a barber chair, the more uncomfortable dentist's chair of "Cremaster 3" and the obviously unsuitable shoes recall the blade shoes used to chop potatoes in that film. The removal of legs is also a recurring theme as Barney and Bjork model themselves here on double amputee Aimee Mullins, who sported Lucite legs in "Cremaster." Bjork's music and vocals fit like a glove and add depth to all this weirdness, her shrieks more unsettling than the soothing sounds of whale music. Barney's vision of life is always violent, death an integral part of it. "Drawing Restraint 9" is a unique collaboration by two unique artists, but while Bjork gives Barney more accessibility, he still stubbornly refuses to clue us in on the meaning of his fever dreams.