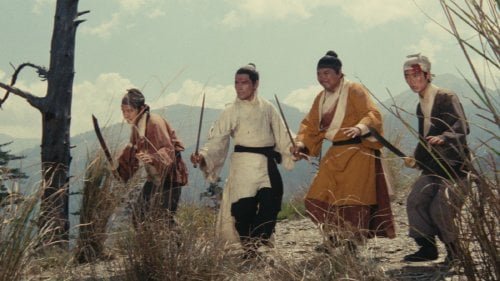 In ancient China, the Emperor's eunuch has executed the disgraced commanding general Yu and ordered his bloodline destroyed. But, Yu’s daughter and son are spirited away and are pursued by the Eunuch’s secret Black Arrow Troop, the East Espionage Clan. The Yu children, the clan, and several journeymen sword masters, will all end up at and do battle in the “Dragon Inn.”

There are always films that nag at the conscience, classics and rarities that one has yet to see. With the new 4K digital restoration of King Hu's classic "Dragon Inn" hitting theaters, a movie so beloved Ming Tsai Ling created a movie of his own around it, there is now no excuse for anyone who likes wuxia, the ancient Chinese martial arts genre, to miss it. Those who have seen it should be anxious to revisit the Chinese Taipei Film Archive's spruced up version. In 1457, the Ming emperor's minister of defense Lu is executed, his children pursued by ruthless secret police who take over the remote Dragon Inn. But innkeeper Wu Ning, who presents himself as an accommodating, somewhat clueless book keeper, was one of Lu's lieutenants and he sends for Hsiao to help them. Another prong of defense comes in the form of a brother martial arts team, one of whom is actually a woman in disguise. Hu's action film is goosed with plenty of humor amidst the action. We've grown accustomed to wire work in wuxia films, but that is a relatively modern technique. In 1967, when "Dragon Inn" was made, it wasn't yet in use, so it's all the more astonishing to watch swordsmen and women somersaulting through the air or chopsticks used to thwart weapons, all stunts accomplished in camera or through editing. The widescreen, Eastmancolor film is framed like a Western with such Eastern touches as cherry blossoms framing a startlingly blue sky. Dragon Inn features swinging doors and an open balcony, recalling interior fight scenes in many a Western saloon. The traditional score features the Chinese instruments which sound like clacking sticks, propelling the action. Grade:

Believe it or not, this is a 1967 martial arts (wuxia) film by writer/actor/director King Hu and one of the earliest modern examples of the genre , which translates to “military (wu) honor (xia).” The newly restored 4K release of the “Dragon Inn” has all the elements of a true wuxia classic with its many martial battles with characters performing dazzling feats of skills (well before the introduction of wire work) , colorful costumes, almost manic editing of the action scenes and well-defined characters. Dragon in is a noodle western that has all the elements of the classic American genre. There is the isolated Inn in the middle of a wasteland, like the way stations in “Stagecoach (1939)“ and “The Hateful Eight (2015).” You have the good guys – the Yus, inn-owner Wu and a mysterious stranger, Xiao, and the Zhu brothers who happen along to the inn – and the bad guys, The East Espionage Clan, led by commander Pi, the vassal of the Eunuch, Cao. There is action aplenty from start to finish and the fight chorography is splendid, especially considering that this is a 50 year old movie. The restoration is beautifully done with the colors popping and the action rivals such films as Ang Lee’s “Crouching Tiger, Hidden Dragon (2000).” Anyone who loves the genre should do themselves a favor and make the effort to see “Dragon Inn,” on a big screen if you can.