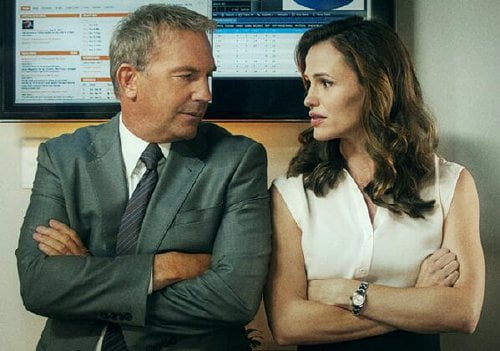 Cleveland Browns GM Sonny Weaver Jr. (Kevin Costner) needs to do something to shake up his team and his own reputation. Fans haven't forgiven him for firing their beloved coach (his own recently deceased dad), owner Harvey Molina (Frank Langella, "Frost/Nixon," "Noah") wants to make a splash and Sonny's doubting his own instincts. Adding to the stress, Sonny's secret girlfriend, team accountant Ali (Jennifer Garner, "Dallas Buyers Club"), has just told him she's pregnant and there's twelve hours to go on "Draft Day."

Director Ivan Reitman ("Ghostbusters," "No Strings Attached") steps out of his comedy zone for a sports drama whose titular wheelings and dealings may not always add up but which proves a good character study vehicle for star Costner. The film, with a first credited feature script by Scott Rothman & Rajiv Joseph, plays a lot like "Moneyball" for football had that film tossed all the statistical machinations for old school gut. Sonny's had his eye on running back Vontae Mack (Chadwick Boseman, "42"), a guy who'd strengthen the team, but whose rap sheet gives pause. He's happy with his quarterback, Brian Drew (Tom Welling, TV's 'Smallville'), but his past season was marred by injuries. When he gets an early morning phone call from the Seattle Seahawks offering to trade their first choice draft pick, which everyone's pinned on QB Bo Callahan (Josh Pence, "Fun Size," "Gangster Squad"), Sonny knows it would draw the flashy media focus Molina wants, but, recognizing his desperation, they're asking a very high price - his next three years of first round picks. Reluctantly, he takes it and all hell breaks loose. Costner, wrestling self doubt at every turn, is terrific as a man fighting his way out of an increasingly small corner. The actor dons few facial expressions, but we can see his continual interior chess game. His decision starts the rumor mill on local radio radiating inwards and outwards. Molina's happy but his coach (Denis Leary) is pissed that he's been left out of the decision making, his team trainer picks the moment to inform him that Drew's in the best shape of his life and initial inquiries into Bo's background offer unsubstantiated red flags as draft pick hopefuls continuously argue their merit. Meanwhile Sonny's mother Barb (Ellen Burstyn, "Requiem for a Dream") shows up with his ex-wife (Rosanna Arquette) in tow to scatter dad's ashes and diss Ali. (The film also features Terry Crews, Sean Combs, Sam Elliott Chi McBride and Kevin Dunn.) Reitman and his writers may use a bit of misdirection, but the maze they've given Sonny to navigate and his last minute switchbacks are full of suspense and, ultimately, pay off with a highly satisfying climax, both personally and professionally. The background investigation on the first pick quarterback is particularly deft in the writers' use of psychological tells and tricks of the trade. The film's briskly paced, employing digital split screens which wipe horizontally, vertically and even allow their inhabitants to escape one for the other.

Each year in April, the 32 teams of the National Football League get a chance to pick the top college players to make their team a winner during the upcoming season. But it is more than the worst team gets the first choice and the best team the last. There is a whole lot more going on behind the scenes on “Draft Day.” Early on in the Kevin Costner starrer, you get the strong feeling that you have seen “Draft Day” before. And, you did – in 2011’s “Moneyball.” That film showed the politics of building a team in a far clearer way than does director Ivan Reitman in his latest dramedy. Costner is Sonny Weaver, Jr., the General Manager of the bottom dwelling Cleveland Browns. The NFL draft is fast approaching and Sonny needs to parlay his draft pick position into recruiting new blood for his team. What follows is a whirlwind of phone calls with the other teams’ GMs in a bid to make the best deal he can. There is a lot of chatter, in NFL-speak, about deal making and jockeying for position in the big draft. Kevin Costner gives Sonny a degree of gravitas as he fights to do what he thinks is best for the team – despite the strong objection by his head coach Vince Penn (Denis Leary). But, this does not stop him from his quest for the best pick, even if it is against the orders of team owner Harvey Molina (Frank Langella). He also refuses to take the advice of his assistant and pregnant lover Ali (Jennifer Gardner). The tensions build as the hours and minutes tick by to Draft Day. I would like to say that you do not need to understand the machinations of the NFL draft system and its many rules and ways to negotiate for each team to get the best pick. However, you do need to know these mechanics if you are to understand what is going in “Draft Day.” That is no guarantee, though. After seeing the film, I did some research on how the draft works. There is a disconnect between the draft rules and Sonny’s anxious negotiations to get the best college player for the Browns. The slight of hand on how the rules work makes for much confusion, at least to a non-football fan. Two novice feature scribes, Scott Rothman and Rajid Joseph, worked on the screenplay and they do a fair job in showing the excitement (and anxiety) that builds as the draft day draws near. They do not do so well with the tacked-on-feeling romance between Sonny and Ali. Not once is there any real spark between the two. They also create a conflict between Sonny and his mother, Barb (Ellen Burstyn), over the placing of his recently deceased father’s ashes on the playing field. Plus, there is a back story about how Weaver fired his father from managing the Browns. These divergent paths take away from the actual Big Day. Director Ivan Reitman does have a good cast and elicits some dimension in what are mostly brief performances on screen. He does not handle the story with the aplomb of helmer Bennett Miller and writers Steve Zaillian and Aaron Sorkin in “Moneyball.” “Draft Day” should do well with the NFL fans out there but does not have much to interest the not fans.